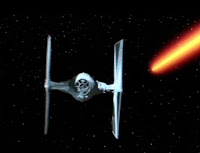 After the opening crawl, the camera pans across a starfield to a pair of TIE Fighters bearing down on a weird old Y-wing, while in the distance a Star Desroyer lurches forward menacingly. Crackling across subspace radio comes the message "The Neldanis System is under Imperial quarantine, power down and prepare to be boarded." Our heroes, Boyd Bannon (Rebel Fett), Kip Fendo (Cargo Cult Jedi), and Cee-Lo (Rodian Gunbunny) opt instead to powerup shields and shipboard weapons. A brief exchange of fire results in one of the TIEs being explodified, with Green Thirteen (the PC's ship) flying through the expanding gas and debris field. Boyd diverts weapons power to the ship's engines, and outruns the remaining TIE Fighter and the creeping threat of the Imperial Starship Eviscerator. After discovering that a stock Star Destoyer has a tractor beam capable of a +68 grapple, the players where in no hurry to stick around a fight the remaing TIE.

Green Thirteen screams through the polluted atmosphere of Neldanis IV, eventually doing a flyby over the region known as the Graveyard of Ships. Sensors pick up a location with three silhouettes matching a KT-57 Repair Shuttle, put there's no place for a safe landing nearby. Stuart, Kip's player, asks "How big are the ships in the junkyard?" To which I make up a reply on the spot. "Most of the ships here are small, but a few capital ships and big freighters have been 'soft crashed' here using tractor beam landings." So the PCs find a scuttled Republic Cruiser with an open fighter bay nearby and hide their ship inside. After determining that Cee-Lo has the Mechanics skill necessary to refurbish a scrapped vessel, the party opts to leave Effo at the Y-Wing. 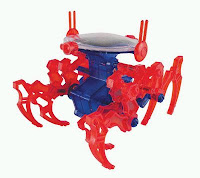 Cut to the party trudging through a filthy junkyard ("Like where Fat Albert and the gang hangs out, but with spaceship parts."), with Kip holding some sort of tracking devise to navigate to the Repair Shuttles, Cee-Lo hefting a bag full of tools, and Boyd letting the other two do all the work. We make a couple of rolls to avoid mishaps with shifting junk under foot or tottering stacks of parts, but the terrain fails to attack. But en route to the shuttles Kip notices a tiny spider-like droid scuttling away from the group...

A few kilometers of hiking later the party comes upon their goal. One of the shuttles looks mostly intact, which makes Cee-Lo nervous. The second shuttle has a hole punched in the canopy and wires and parts showing in the drive section. The third one is a rustbucket, but has flames painted along the sides. So of course the PCs opt to cannibalize the first two shuttles to repair the one with the cool paint job. I kinda expected that out of this bunch.

Cee-Lo and Boyd work on repairing the shuttle while Kip stands guard. They get most of the Shuttle systems online but one key component of the hyperdrive, known as the King's Valve, proves to be a problem. Two of the King's Valves are unusable. The third is just plain gone. Here's a picture of a KT-57 Repair Shuttle Hyperdrive King's Valve, which I totally forgot to print out for the session: The whole thing is roughly the size of a frisbee. I think I did an okay job making it look Star Wars-ish. What do you think? Anyway, just as Cee-Lo and Boyd realize that they've got a major problem, Kip starts to hear a growing rumbling/clanging/churning sound coming from all around him. He summons the others out of the ship just in time for about 40 droids of varying sizes to appear in a circle around the ship. These droids are all haphazardly made of junk and droid parts, such as the dude who looks like a Terminator but has a C-3PO head where his right arm should be, or the guy who's a Droideka from the waist down with a jumble of erector set and stereo parts on top. The PCs are informed that they are trespassing on the territory of the Droid King and they are all under arrest.

After a brief debate the party opts to go talk to the robo-monarch, so cut to the Halls of the Droid King. There they meet Ferdinand Poofypants Blaycox the Second, King of All Droids, who is a generic robo-torso with an old battledroid head, at least a dozen random robot arms, all of which is built right into the king's cast iron throne. Guess what the King wears as a crown? ("The King wears a King's Valve. These droids are very literal." -Pat) On either side of the throne/king is a stack of droid heads piled nearly to the ceiling, all of which are operational and constantly chattering amongst themselves in Basic, which Cee-Lo happens to know. King Ferdinand explains that in his realm biological units serve droids, instead of the usual arrangement. When asked what service is expected of them the droidheads start chanting "Kill the Technovore! Kill the Technovore!" Soon the operational droids join the chant.

So the PCs strike a bargain with the king. If they can bring him the head of the Technovore, he will award them with any starship part in his realm. The King dispatches Sir Garglegax, a labor droid with a rivet gun for one arm and a blender for another, to lead our heroes to the lair of the vicious Technovore. Turns out the Technovore is some sort of cyborg lizard thing that eats robots. At one point I describe it as a tiger made out of dinosaurs and robots. The party gets the jump on the thing as it is finishing a meal and begin peppering it with blaster fire. Sir Garglegax, who is terrified of the beast, fires redhot rivets in a wide, dangerous arc. As the Technovore gallops towards Kip a valve opens in its forehead and it spews hot plasma at him, but the faux jedi matrixes out of the way. Kip then uses the force to pick up the beast and impales it on a nearby metal pole, killing it. With a single swift motion Kip decapitates the thing.

Cut to Kip holding the head aloft in the throneroom of King Ferdinand. All the droids are cheering. The droidhead columns are abuzz with excitement. Some of them are suggesting that someone needs to complete construction of the king's daughter, so she can be married to one of the heroes. With that note Boyd just walks up the throne and plucks the crown off the King's head. The PCs cheese it as the king screams "Come back with my crown." I'm not particularly in the mood for a chase scene right here, so I declare that the film speeds up just like on Benny Hill. Pat notes that Yakkity Sax is playing in the background.

Next scene is of Cee-Lo slamming the stolen King's Valve into position and the KT-57 zooming over the landscape to rendezvous with Green Thirteen. The party retrieves their two suits of black stormtrooper armor and scary dark jedi cloak. Cut to space where the shuttle and Green Thirteen zoom to hyperspeed.

In part 2 the PCs will encounter the Urgonia System, TechnoDreadnought Reconstructor, Commanderette Vixen, and a slight case of mistaken identity.