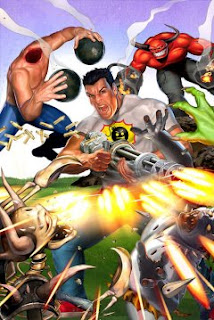 1) When I finished the game on easy mode, I immediately started over at the next highest difficulty. I literally went from "End of game, huh?" to "Let's fire that puppy up again!" in the space of a few seconds. I have never done that on a video game before now. Usually I have zero interest in replaying stuff I've already tackled. But Serious Sam provides gobs of frantic action feeling. (It turns out that in Medium difficulty you can hurt yourself with misplaced grenade and rocket fire. That took some getting used to. No more dropping grenades at point blank range to clear out Beggar Mobs.)

2) I got the sequel and started playing it, too. But then on the first level I encountered a buch of non-combatants and a friggin' crate stacking puzzle. I don't want civilians in my non-stop shoot 'em ups and I sure as hell don't want to stop blasting baddies to stack some damn crates. If I wanted to stack crates, I'd get a job in a warehouse. That stuff is like pure anti-fun in this kind of game. So I popped out the disk and played some more of the original. But you know what? The first game is so damn fun I'm considering putting up with the unnecessary additions in the sequel.

I may have to shoot all the civilians, though.