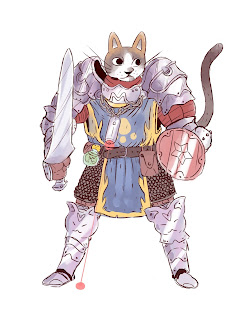 From the journal of Coco the Warrior Cat
(Terrible handwriting with all the typos you could possibly imagine)
Dear diary, today I almost died! But thankfully the Red Star has provided.

After my last rather uneventful foray into tombs, I found myself yearning to scratch the itch for gold.

I found 2 willing companions, or rather 1 companion and an entire cult. Yes dear diary, we somehow convinced over a 12 fools to throw their lives away [Maxim ran Joseph Manola's The Extras class -Jeff]. They seemed to worship some sort of false god, with its scriptures making some sort of allusion to what some humans would call WRESTLING.

Nevertheless, the fools proved worthy as they helped me carry my newly purchased armour until we reached the tombs themselves.

We traced back my last expedition, finding a measly trap (barely a graze on my lustrous plate mail, although it did kill one of the foolish cultists) which we quickly deactivated. Then on the room with the crack on the floor, we actually found a couple of Cone headed monstrosities. They were no match to my sword (and a mob of almost 20 fellas). Little Albert, the kind mage apprentice took one of the creature’s legs, for possible carnivorous ill-intentioned creatures beyond.

There we decided to check the hole which held the mould which almost killed me. The cultists seemed eager to find “wererats”, as if measly rats could amount to anything. They convinced us it was a great idea to crawl into a foul tunnel into the unknown. Dead diary, crawling over 100ft. in plate mail is not something I would wish upon my most dreary enemy.

Eventually we found ourselves at what we presumed was the second level of the dungeon. Bats swirled upon meeting our torchlight, scaring the cultists (one of them surely soiled it’s breeches). Within we found a set of doors and stairs going up. In the hopes of leaving here with our lives I suggested we go up and look for a path back to entrance. Upstairs an unfamiliar corridor led us to a room full of Eye headed armoured man, which weren’t very happy about my sudden entrance.

Little Albert then used his magic to charm the biggest of these fellas, whom took out a horn and sounded some sort of “cease-fire”. After “parlaying” with the creature they actually invited us for dinner, a bowl of squirming centipedes each. Little Albert used his amazing intellect to communicate with the creatures, mixing dirt and wine to create some sort of ink upon which they could write messages. The Eye people were able to understand us and healthy cultural exchange began.

The Eye people mentioned some sort of “Space Bat Omega”, motioning us to follow them. Thinking we had made some friends we followed suit. They led us back to the chamber beyond the tunnel, using their horns to tame the bats, then opening a set of secret doors. Soon enough, we found ourselves what we could only presume were the creature’s lair. 24 sarcophagi with strange letters adorned this room, upon which one opened on our arrival.

Dear diary, it saddens me to say, but I think I might have soiled my pants at that point. A gaunt bat headed creature (wearing only a loin cloth) rose from the sarcophagus, it’s eyes like that of bugs. Hanging from it’s ears were a set of dangling earrings. We could not gaze at it for long before IT spoke. Oh my dead Red Star, it’s voice shook my entire body, my teeth rattled and my tail felt like it wanted to snake away from my body. Around the room we were surrounded by dozens of Eye people, some even had guns! They talked with their master, about which I assume was some sort of foul ritual we were going to be a part of.

We had to escape. I whispered to the cultists that I could use my holy lantern to distract the creature while we ran, but they were actually eager to throw their lives away (fools). I pointed my lantern at the Creature’s eyes, and just like the stories my people told, the Red Star provided! It blinded the Creature momentarily, the stream of light reflecting at it’s eyes, spiralling out of control. While the cultists launched their suicide attack, me and Little Albert ran for the door (which the damn creatures had locked). We struggled to open it while fighting back the Eye people. When I managed to open the doors I looked back only to glimpse one of the creature run their blade through Little Albert. He wouldn’t make it out alive.

Surprisingly, as I was running back to the tunnels, one of the cultists actually showed up! They managed to fight whatever was that thing and ran away! Thankfully the creatures had some sort of aversion to the tunnels, lagging behind us, giving us our only hope of escape.

Through what I assume was most strenuous amount of running I ever did, we both managed to reach the stairs back to the surface.

As I write this in my warm bed, I can only scarcely believe that I breath. No alcohol tonight, as I fear I might hear IT’s voice again. 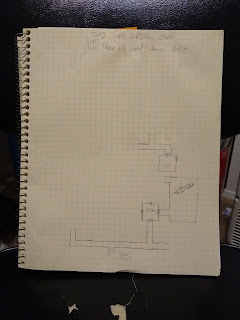 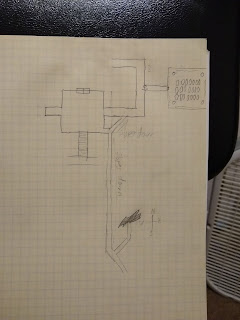