In a comment to a previous post, Scott Anderson asked for a new batch of Vyzor-style henchmen.

Here you go. I hope they serve you well!

the opposite of walls

I haven't used dungeon tiles in years, but I sometimes like to relax by watching people make their own tiles. I'm talking about folks like DM Scotty, Wyloch, Black Magic Craft, The Tabletop Engineer, Professor Dungeon Master*, and DungeonMasterG. There's just something soothing about watching someone turn a bit of corrugated cardboard or some foamcore into a little piece of dungeon architecture. I especially like the painting, where often simple mixes of blacks and whites and greys become a sophisticated dungeony look.

But something has bugged me about dungeon tiles for a long time. They tend to encourage two-dimensional thinking. Sure, we have 3-D figures, and maybe furniture, too. But they all exist in what tends to be a flat plane. And I think the presence of walls on tiles, although aesthetically pleasing, doesn't do much to help in getting the DM and the players to think in three dimensions. Crooked Staff Terrain recently has done some work to alleviate this problem, but today I want to talk about the problem with walls specifically.

I'm going to start with a very simple argument: walls are so ubiquitous in dungeons that, in most circumstances, you don't need them on the playing board. For example, I tell you that the corridor you're going down ends in a T-intersection. I then put down this tile: 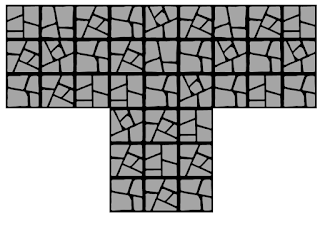 You have a pretty clear idea of where the walls are and where they aren't, don't you? If there is ambiguity, like say the western leg of the T turn's north, then an additional 10'x10' tile should do the trick: 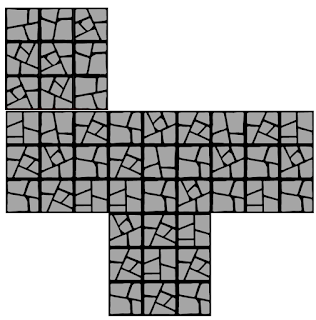 (I've gone to 3 squares for a 10' wide tile because I think that better fits. 2 square wide corridors always seemed super-cramped to me. And Gygax recommends 3 and a third foot squares on page 10 of the first edition DMG. As I recall, Empire of the Petal Throne allows 3 adventurers breast in 10' corridors as well. There's more variability there, though. In EPT you can fit 4 abreast if no one is wearing metal armor, while 2-handed weapon users can only fit 2 abreast. Except for 2-handed sword wielders, who need the entirety of the 10' corridor to operate properly.)

Below is a normal corridor. What if I want to represent that one side of it has no wall, but rather looks down on something below? Since dungeon delves involve piercing deeper and deeper underground, I think that would be a more common scenario than the stacking up that Crooked Staff does in the video I linked above.

Here's one idea how to represent that: 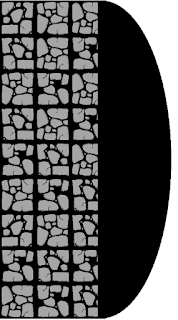 The black part represents the yawning void where the east wall should be. There's got to be other ways of depicting this sort of thing, so that adventurers can better interact with the 3-D dungeon environment. How do I show, for example, that there's more dungeon down there?

(BTW, these tile images were made with the Flagstones font. S. John Ross made it many years ago. It's a pretty great way to crank out a lot of paper tiles quickly. I don't see it currently listed at his store on drivethru, but he has lots of other cool stuff there for sale.)

*Special recognition for Professor Dungeon Master who, in addition to great crafting videos, has some really sound DM advice videos.

look at these handsome lads

The fine fellows are GOB10 Orcs with Clubs from CP Models. I don't know CP Models from the dogcatcher, but I love the vibe I'm getting off their humanoids. Their orc captain looks like a sophisticated gentleorc, while the orcs with spears look like they're grumpy that they had to get up early on a Saturday for monthly reserve practice.

I especially like the guys in the pic above because Basic D&D orcs are noted as favoring "swords, spears, axes and clubs" (page B40), but I'm not sure I've seen an all-club unit of orc figures before.

on tallking to monsters in BX

Very few canonical BX D&D monsters will automatically attack the PCs. Ghouls attack anything living. Zombies attack on sight. Goblins and NPC dwarves attack each without hesitation. Kobolds always attack gnomes. Tyrannosaurs will try to eat any creature man-sized or larger. But that's about it. (Displacer beasts always go after blink dogs. Frost and flame salamanders will go after each other. But those cases are rarely any of the party's business.)

Nearly every other kind of monster in the official BX rules is fully capable of exhibiting other behaviors at the beginning of an encounter besides attacking. Even berserkers don't mindlessly attack until they make an informed decision to mindlessly attack.

Additionally, unlike AD&D and its successors, the stat block in BX does not have a field for monster intelligence. Some entries specify the intelligence of a creature in the text, but many do not. There are a lot of monsters in the BX rules that I usually tend to assume are unintelligent only because I know their Monster Manual entry. The DM would be completely within the bounds of the rules as written to decide, for example, that an ochre jelly is smart enough to parley with. The text doesn't say anything either way. Even normal animals could talk in your campaign, if you wanted to give it a more fairy tale feel.

Now, consider the existence of the Monster Reactions table (page B24).  Lots of monster encounters, especially wandering monsters, can be concluded without risking violence if the monster can be communicated with.  Furthermore, a roll of 12 on 2d6 gives the result of "Enthusiastic friendship", giving the party a big incentive for talking to a lot of monsters. If you are going to explore a hellish, trap-laden underworld, having some sort of big, scary monster as your friend sounds great to me.

A 12 on 2d6 occurs only 1 throw in 36, but high charisma modifies the die roll. A Charisma of 13-17 gives a +1 on the roll, upping the odds of friendship to 1 in 12. Furthermore, the worst result on the chart, "Immediate attack", is no longer possible. An 18 Charisma allows for new monster buddies 1 in 6 encounters.

So the next time you spot a carrion crawler, try asking it how its day is going.