I'm going to begin this post with an outright act of theft.  Here's a pic I swiped from an old post from Mike Monaco's excellent blog Swords & Dorkery:

Those are painted-up examples of Grenadier's old hirelings.  I am normally inclined to obsess over which minis have torches and rope but these guys have been on my mind for the past couple of days.  Most sessions I don't fuss over encumbrance, but sometimes when I'm feeling ornery I want getting that one really big haul out of the dungeon to be a whole adventure itself.  In order to avoid fiddly accounting but give the players something to think about, here are some draft Treasure Chest rules.

Small Chest
Also called a coffer, cask, or strongbox, these containers hold 200 coins (same as a small sack) or else 150 or so coins plus miscellaneous small stuff like jewelry, keys, a treasure map, etc.  Many of these boxes (say 4 in 6) have an integral lock.  Some of these chests are gilded or made of a precious substance, like the Franks Casket.  That would make them an item of jewelry in their own right, using whatever system you use for generating the value of jewelry.  Thus the the box could easily be worth more than the contents, which may only be apparent when the thief blows the pick locks roll and the party gronk smashes the dang thing open.

A small chest slides easily into a backpack, though the DM may want the player who stores it this way to lose 2d6 items from the pack before the box fits.   A week of rations as a single item for this purpose.  Alternatively, a small chest can be tucked under one's arm like a football carry.  There's no movement penalty for carrying a small chest in this fashion, but you can't do anything else with that arm: no holding the torch, no using a shield effectively.

Medium Chest
These are more serious loot boxes, holding 2,000 coins or maybe 1,500 coins plus an array of miscellaneous stuff. About 2 in 6 of these chests have an integral lock and only 1 in 6 are decorated sufficiently to give them value as art objects.

One adventurer can carry a full medium chest on their back or shoulder, as seen in the pic above, as long as they aren't weighed down by a backpack full of gear, their boss's golf bag full of magic swords, or any other big stuff.  Nor can they hold anything else in their hand or even wear a shield strapped to their arm.  Maximum movement rate for such a character is one category slower than the normal speed for their armor.  A henchweenie in leather carries a medium chest at a 90' move, one in chain goes at 60' and a dude in plate moves at a measly 30'.  A character carrying a chest is so burdened that they must spend a round putting their chest down.  Effectively, they are surprised an extra round even when the rest of the party isn't surprised at all.

Two characters can share the burden of carrying a medium chest.  They can wear backpacks and whatnot and move at the normal rate of the slower of the pair.  They can carry stuff in one hand or wear a shield on their arm.  They are subject to extra surprise as above, unless they opt to drop the chest, which gives a 1 in 6 chance of breaking the chest and spilling the contents all over the dungeon floor.

Large Chest
A large chest holds 5,000 coins or 4,000 to 4,500 plus miscellany.  They tend to be heavily padlocked rather than possessing integral locks and rarely are decorated.

No normal character acting on their own can lug a large chest out of a dungeon; this is a two person, four handed operation.  The maximum move of this team is one category lower than the slower member of the team.  They are subject to an extra round of surprise as above.  If they drop the chest there is a 1 in 6 chance they or someone nearby will suffer a debilitating foot injury in the process.

The size of large chests can also be an issue when going through tiny secret doors, around narrow spiral staircases, etc.  Say a 2 in 6 chance of the chest getting stuck at least long enough to cause a sufficient fuss that the DM gets to make an extra wandering monsters check.

Lately I've been scribbling a lot of dungeon maps.  I think because it's a stress reliever and this semester has been rougher than most.  Anyway, I've farted around with isometric graph paper once before and my love for 3-D dungeon environments is pretty well-documented, but until today I never tried to combine the two.  Composing isometric dungeons has always looked like harder work than the normal God'd eye view, but this morning I printed out some iso-type paper from here.

I thought I'd start by trying an isometric view of the sample dungeon from Moldvay Basic, with it's nifty maps by the one and only Erol Otus. 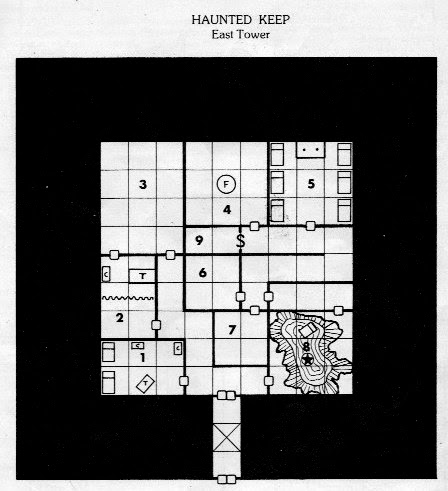 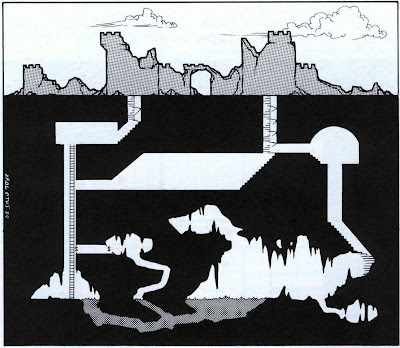 Here's what I sketched out based on those two images: 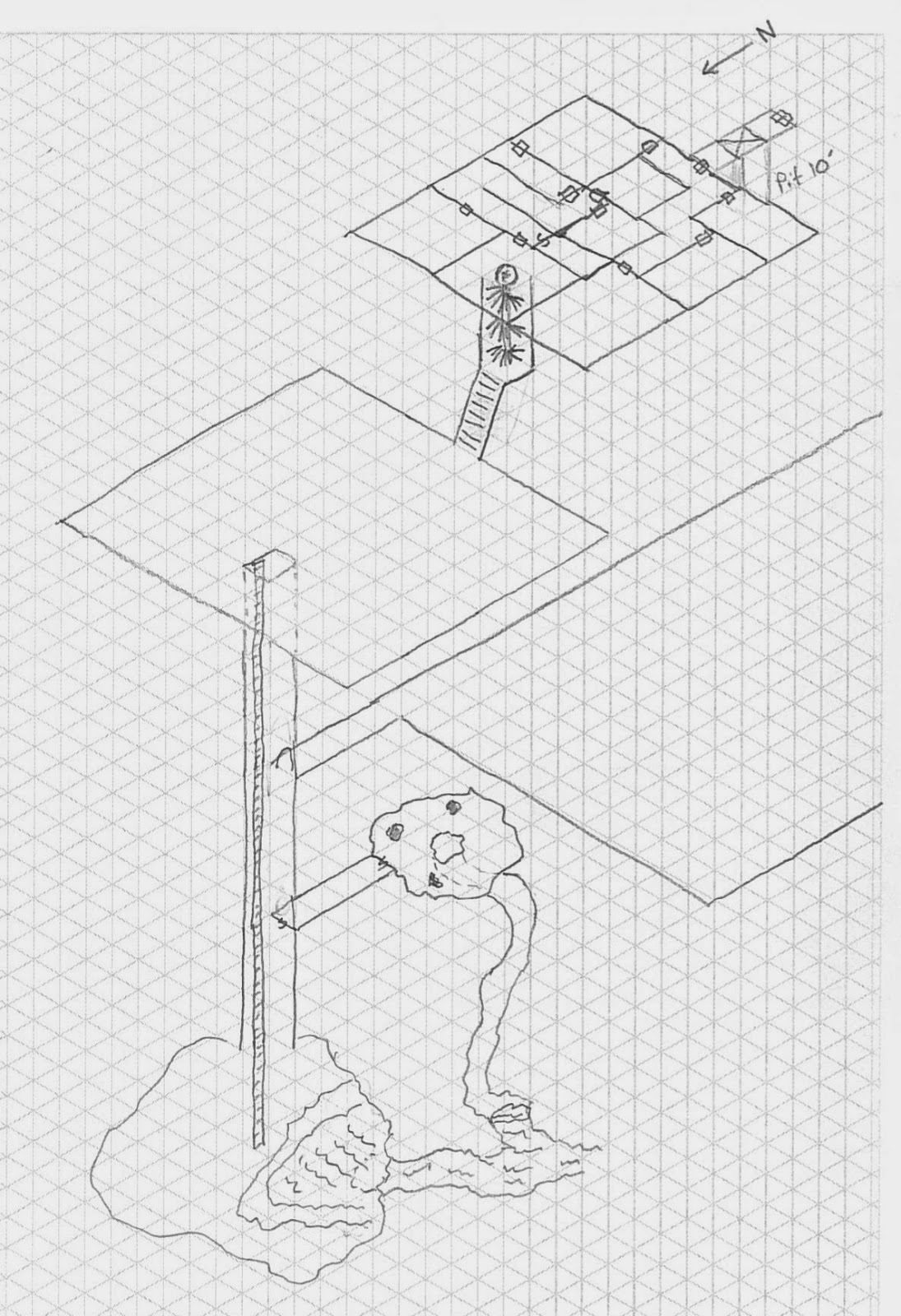 It's not a perfect replication of the information contained in the maps above, but I've got a better sense of how vertical layers interact now.  Though I think the caves at the bottom look too flat.