my best idea ever

Several years ago now I taught a British literature class with an emphasis on authorship and how an idea becomes a book. The final project for the class was for small groups to design a game that demonstrated what they learned. We spent a class period playing the games, then I took them with me over to my sister Jenn's place. She is crazy about Eurogames the way I am crazy about D&D. She, my wife, and I played the games as part of my grading of them. Here are the pictures that Jenn took. 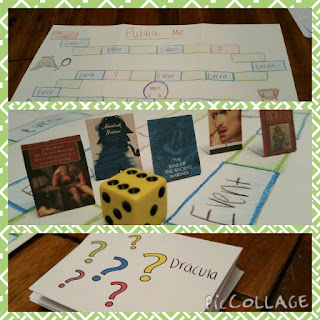 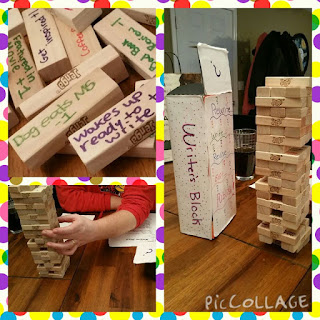 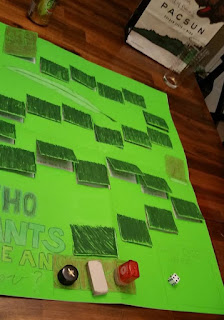 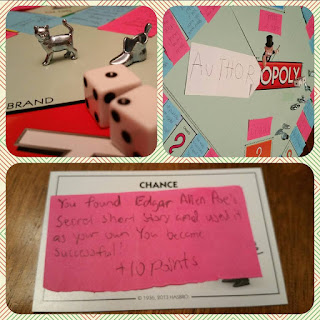 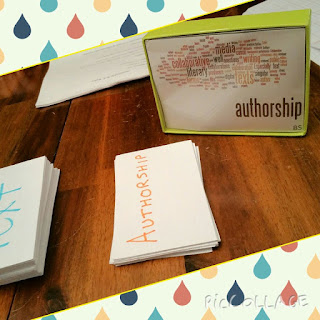 Now personally, I love the razor-sharp nonsense players come up with when they only have a hit point or two to their name.  Levels 1-3 are a pretty sweet, as far as I'm concerned. But sometimes folks don't want to play such feeble characters. Here's two quickie solutions.

Start above 1st level. You are allowed to do this! It's your dang campaign! As a kid I played in numerous campaigns where we just started at 3rd or 4th level. The sky did not fall. Later we wised up and realized that with the various XP charts, the smart way to do this is to start everyone out with the same XP amount. We usually went for 10,000 or 15,000 XP. Obviously, this robs the game of the initial rat-killing ogre-fleeing terrors, but we had a lot of fun this way. We didn't alter starting money or give anyone free magic items, but there's no reason why you couldn't sprinkle a few goodies among the party.

This is a new concept that popped into my head when I read Fiona's tweet. The point is to give lower level characters a little extra survivability, while still requiring players to grub their way through the basic levels.

When death comes knocking for a PC, the player is allowed a roll to save their bacon. The roll is over you level on a d6, so after level 5 this won't help anymore. If you save, then either pick or randomly determine from this list:

A Lucky Coincidence means the final stroke fails to land at all, but the DM is free to introduce some sort of new complication, like you were saved at the last moment by a bounty hunter who wants to take you in alive. Equipment Sacrificed means your shield is shattered under the blow, your magic sword breaks, your backpack full of treasure ends up in the acid pit instead of you, etc. The player must give up something of actual value here, not just some random stuff they purchased. Debilitating Injury means the PC was struck down, but is severely wounded rather than killed. They won't be of much use to anyone until they have 2d6 weeks to recover someplace safe and even then they will have a lasting injury, either an ungly scar or a limp or something.

DMs trying this method may want to track the players' use of these three escape routes. Maybe you only one to allow one of each type per level or something like that.

Today I thought I could squeeze a blog post out of a bunch of undeveloped ideas that are scrawled into my current DM's notebook. Make of them what you will.

Here are the entirety of the infravision rules as they existed in 1981, per page B21.


PET PEEVE: I have never seen a computer game that attempted to simulate infravision. If you have, please leave a comment!

Here's some random dungeon art I googled up. A background from the computer game Darkest Dungeon, maybe? This is what your normal torch- or lantern-bearing crew would see. 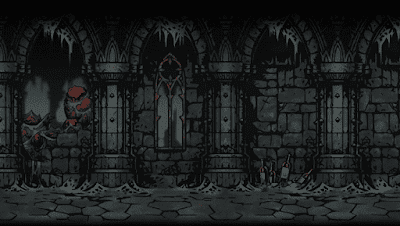 With infravision,  color is determined solely by temperature. And things left laying about a dungeon for centuries will tend to be at the same temperature. Without a proper light source, the party elf or dwarf might see something like this: 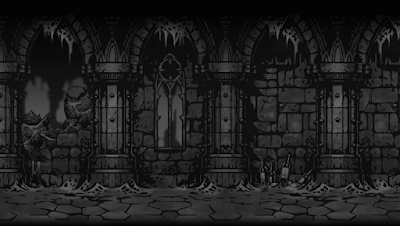 It's a subtle difference, but that weird rock formation on the left no longer pops out, and those wine (potion?) bottles will be a little harder to find. Now let's add some monsters to the scene, first by normal vision: 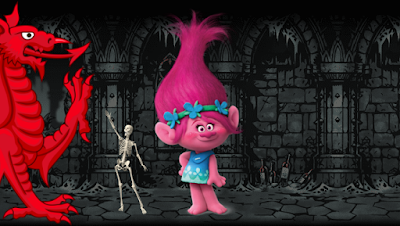 The red dragon, skeleton, and troll are all pretty easy to see. Not quite the same scenario using infravision: 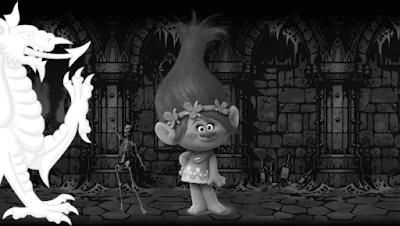 The internal heat of the dragon makes him almost too bright to look at. The troll is basically unaffected. The skeleton has become the same grey as the walls and floor. Undead are hard to spot via infravision because of their tendency to be the same temperature as the background.

Note that my interpretation here is the most generous one I can make, based on the rule above. You could argue that infravision is in fact must worse at picking out details than normal vision, hence the 'no reading' clause. Maybe infravision actually looks more like this: 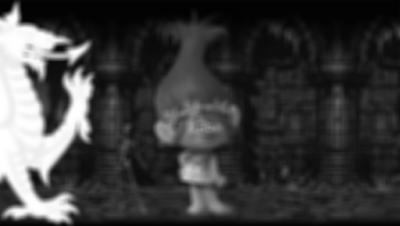 The clerics, fighters, thieves, and magic-users grew so numerous that they met again where they started at the Center. Suddenly, they could recognizing the missing parts of themselves. Half reunited joyously with half. Thirds came together and embraced. To celebrate this happy event, they held a great celebration, inviting the elves and dwarves and gobble-folk. The halflings were already there.

This event was the first marriage feast. Everyone was happy, except the demons. They were displeased that their gobble-folk slaves  were invited to the feast while they had been snubbed.

a creation myth, part I

Back at the start of things all was possible, all was present, all was mixed up. There was no thing separated from any other thing. No one knows how long this pile of allness lasted, for the past had yet to be divided from the future.

But somehow, something became divided from nothing. East split off from west,, north split off from south. Heaven floated upwards as hell sank to the bottom. Laughter became distinct from lament. Gods and demons parted ways. The land dried up and the waters pools. Animals moved about and plants grew in one place.

Watch Out for Bucket Bob

Here's a random chart from my D&D notebook.

Bucket Bob is some type of humanoid, fairly large (a bugbear or a troll, maybe?) but sneaky as heck. When he shows up on the wandering monster chart, he will usually (4 in 6) surprise the party. His normal procedure is to throw the contents of his bucket at d4 members of the party, then run like hell.


Is the bucket enchanted? Does Bucket Bob know some magic spell that can allow a normal bucket to suddenly contain lava or whatever? Heck if I know.

All weapons do d6 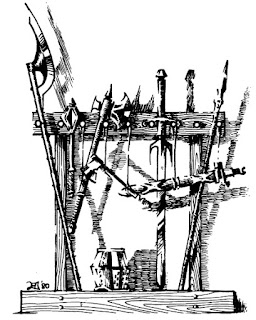 In the earliest versions of D&D individual weapon types were barely distinguished from one another, mechanically speaking. All weapons did d6 damage, from daggers and clubs to two-handed swords and lances, at least until Mike Mornard pestered Gary about it. Weapon speed and armor type adjustments came later as well. My beloved Basic/Expert version included variable weapon damage (i.e. daggers d4, swords d8, polearms d10, etc.) as an optional rule, but it is an option that I've always used, as has everyone I've every player with. (S. John Ross doesn't use it, as I recall. But he is exceptional in many ways.)

Anyway, I want to consider here what it would look like if I went back to all weapons do d6. Why would you choose the weapon you choose, assuming no specific mechanical advantages or disadvantages attach to them? Below are two possible answers, which I think are completely compatible with each other.

[Note that I am ignoring the rule that two-handed weapons strike last in initiative, as that rule is directly attached to the variable weapon damage option (see page B27).]

From a certain point of view, this is the first, best reason to do anything in an RPG. You're exploring an imaginative space, you might as well populate it with things that come together in an aesthetically interesting way. Taking away specific weapons rules means I no longer feel guilty about choosing a suboptimal weapon (I sometimes worry about not pulling my weight when I'm a player). If I want to, say, bonk the bad guys with a rude wooden club, the d6 rule doesn't actively discourage that behavior.

If you are making effective use of your head-brain, there are lots of ways that a specific weapon impinges the gameworld that don't necessarily need mechanics attached. Need a small back-up weapon that can be stored securely but also drawn in a flash? A dagger or shortsword makes a lot more sense than, say, a warhammer. Want to hold off the touch attacks of some creepy ass monster? A spear or a polearm will get the job done a lot better than a club. Need to hack down a door that no one can open? I hope someone is carrying a battle-axe. If all weapons do d6, I suspect it would encourage more people to start thinking about their weapon choices in this way.

Sometimes when you float All Weapons Do d6 rule on the internet, some joker will come back with something like "Well then, I should just spend 1gp to buy 12 iron spikes and hand them out to all my friends. No need to spend the money on anything better, since everything does d6." My response to that is twofold: A) All Weapons Do D6 is not the same concept as All Objects Do D6. Prepare to encounter mechanical penalties for wielding a non-weapon in combat. and B) There's a fine line between clever and stupid and you are are nowhere near that line. 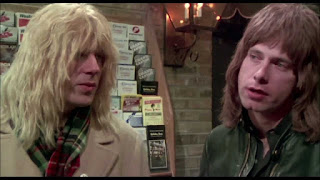