[This was written to be added to the Random Advancement compilation, which continues to grow.]

A few people have questioned the need for an alternative advancement scheme for use with any fantasy roleplaying system (you know, where “any” is meant to stand for “that one game and all its closest imitators”). Although I cannot speak for my many august collaborators, I think it would be useful to outline my personal reasons for embracing random advancement in my own campaign. I will try to be brief.

The earliest versions of the dear old game featured what I might call Lockstep Advancement. Apart from the die throw for hit points, nothing distinguished one fighting man of fifth level from another, in terms of class abilities. Obviously different ability scores, equipment, magic items, character disposition, and player skill could easily set one Swashbuckler apart from the next, but all their abilities as a fighter 5 could be expressed with a hit total and a level title. Clerics, thieves, and many other classes acted in much the same way; each level of advancement brought the exact same benefits vis-a-vis their class designation.

This was, in fact, a very useful state of affairs for the prospective referee. NPCs could be expressed quite succinctly. The one exception to this scheme early on was the magic-user, whose spellbook determined their class abilities. Other class ability customization started to creep in via things like druid bonus languages and weapon proficiencies. Inspired by skill-based alternatives to the original game (RuneQuest, Rolemaster, etc.), non-weapon proficiencies appeared in late first edition AD&D and skills showed up in BECMI.

Later versions of the game pushed more towards what I call Total Customizability, following in the wake of points-based affairs like GURPS and the HERO System. The rise of Feats and Prestige Classes sent a million players scurrying to make the perfect “build” for their D&D character. This is a great thing if you have a specific vision of what you want your PC to be when they grow up, or if you’re the kind of player who likes to find the most potent combo allowed by the rules.

Random Advancement is proposed here as a third alternative. Not as a substitute for either of its predecessors, but as an alternative for certain kinds of campaigns, certain kinds of referees, and certain kinds of players. Note that the concept of random advancement is not new. Traveller character generation had it from the beginning. And see Jonathan Becker’s nifty Exceptional Traits rules in The Complete B/X Adventurer for another implementation of it in D&D.

Why try random advancement? I can think of a few reasons why I like it:
So if discovering the capabilities of the PCs sounds just as interesting to you as discovering the what lurks in the dungeon, then maybe this alternative is for you.

Yesterday, Peter C.'s PC Ongar the Elementarian died in the banquet hall located on second level of the Citrine Vault as a result of some serious shenanigans.  In revenge, he gave the joint a bad yelp review: 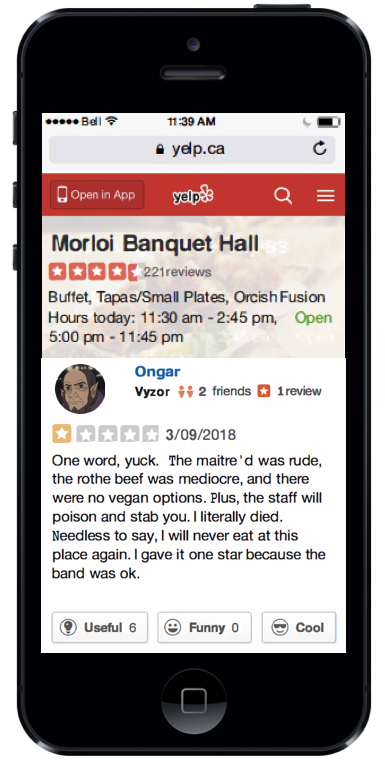 Let slip the dinos of war.

So here's a fun little chart.

This delightful chart is from City State Warfare, a boxed hex-and-chit wargame that's part of the original Wilderlands materials.  I've not played it, but a quick read-through of the rules suggests to me that it plays out mostly like an old Avalon Hill game.  Unlike most fantasy wargaming rules, spellcasting is totally abstracted as additional combat factors.  No fireballs lighting up armies, except as part of the math used to calculate attack ratios.  Do the math, roll one die, look at the Combat Results Table (CRT).  Wash, rinse, repeat.  The chart here is cruder than a typical Avalon Hill CRT; you won't find retreat, attacker casualty, or exchange results, only casualties to the defender.  But the principle is the same.

There are several other nice bits though, like the mercenary troubles above. 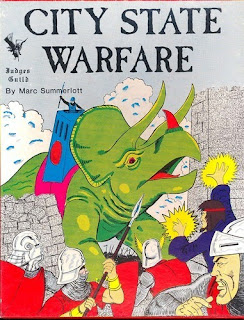 The triceratops with battle howdah on the cover is the mightiest unit in the game.  Seriously, these guys will wreck your shit.  A high level warrior equivalent to a fighter 8 can sustain 3 hits before going down and has an attack factor of 8.  A triceratops counter can take 5 hits and attacks at rank 30.  Wilderlands referees: if you don't have battle triceratops in your campaign then you've been doing it wrong all these years.

I also quite like the recruitment charts, which are similar to those in Ready Ref Sheets, but there is a small percentage chance (one sixth of one percent or .00166666) that demons will answer your call to arms.  Then there's the 3d6 random chart for missile troops where a 3 gives you boomerang throwers and an 18 givens you dudes with repeating crossbows.  Centaur-mounted troops is also a random option on the chart for determining what your cavalry rides.  Add in the lovely Reason for Enlisting chart and you could end up accidentally recruiting a band of boomerang-throwing demons who ride centaurs into battle and the reason they signed up for your war is that they were all drunk.  How cool is that?  (I'm not saying that's a likely result, merely mathematically possible.)

Although the abstracted combat system does take the spice out of wizards and whatnot, it also allows for this lovely chart to account for a number of additional factors. 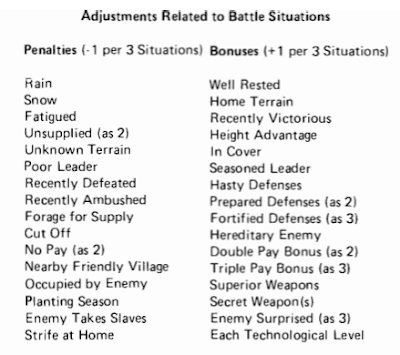 There's also rules for night fighting that account for the phase of the moon, rules for press gangs (including the delightfully named Goon Squad Antics table), and a chart for determining the fate of eliminated units (i.e. a killed chit doesn't mean everyone in the unit is dead).  Sadly, the Leader Recovery Chart does not include a 1 in 36 chance that a demon stole their soul and now you have to mount an expedition to Hell to get it back.  That's my favorite thing about the similar table in Ral Partha's Chaos Wars rules.  But the Leader Recovery Chart here does the possibility of losing an eye or limb as well as a chance that they were captured and can be ransomed for 2d6 times their monthly salary.  Then there's a nice page of charts for when your PCs are not yet army commanders but of high enough level they can be sent out on special missions of various sorts.

The scenarios section includes more historical battles than fantasy ones.  This product came out in 1982, just as D&D was busting out big as a media franchise.  It was still possible in this period to imagine that someone who needed rules for triceratops versus wizard battles might also want to play out Charley Martel stomping on the Arabs at Tours or Bill the Bastard conquering England.

But let's take a peak at the fantasy scenarios.  I'm going to transcribe the intro to the Battle of Pipeweed Farm in its entirety:

The engagement took place in the Decatur Fantasy Campaign World between the forces of the Chang of the Ryne and Warlord Marchan of the Northern Empire.  This day-long battle witnessed the capture of the Chang and the destruction of over one half of his army.  These events led to the siege and capture of the capital, Jasmire.

The relationship between the Decatur Fantasy Campaign World and Bob Bledsaw's Wilderlands material is obscure to me.  I'm no Wilderlands expert by any means.  Can one travel from the City State to the Changdom of the Ryne?  Is the relationship like that of the Lake Geneva campaign setting and the later World of Greyhawk?  I just don't know.

Here are the forces involved, if you want to recreate this battle with another ruleset.


Forces of the Northern Empire


Forces of the Chang of the Ryne

The other fantasy battles are more recognizable to a Wilderlands fan.  If you're going to play a fighter in a Wilderlands campaign, maybe you could put in your background that you fought in one or more of these three battles.

The Battle of Jarmoco features the Vasthost of the Invincible Overlord repelling an invading horde of goblins.  The goblins have a surprising number of hero figures (2 low level warriors, 2 medium level warriors, 1 high level warrior, 2 high level wizards).  The text does not specify the race of these figures, so I assume they are meant to be above average gobbos.  The Battle of Bellystone Ford is a rematch, as the Goblin King attempts to gain revenge for his defeat at Jarmoco.  The Battle of Ukrak Morfut pits the Invincible Overlord against his liege/rival, the World Emperor.  Is there a place called Tenoch on one of the Wilderlands campaign maps?  The intro mentions they met near this location.  The order of battle also notes that the World Emperor's longbowmen get a one pip bonus when shooting.  Since attacks are on a d6 combat matrix, those guys must be legendarily good.  Also worth mentioning, the Overlord's armies include 10 goblin foot and 10 goblin warg riders.  Maybe the defeated Goblin King owes the Overlord a feudal obligation now?  The intro states that "historically" that the Overlord lost this battle and was forced to pay tribute to the World Emperor that year.

Finally, I should note that none of the three Wilderlands battles actually feature triceratops troops, so those may be a holdover from the earlier Decatur Fantasy Campaign World mentioned above.  I was just kidding about you doing it wrong anyway.  But still, don't you think the Wilderlands could use some battle triceratops stomping about the place?