this game does not exist

For the last few days the thinky portions of my consciousness has been hyper-focused on a couple of presentations I did on Friday, so I haven't really had any game thoughts.  Last night this resulted in a pretty vivid but weird dream about a game.  I dreamed that I attended a convention and got to participate in a demo with the creator of a new minis game.  The game was called MORP.  If that is an acronym for anything, I didn't get that info   The guy who made the game called the figures/units in the game Morps.  All caps indicates the name of the game.  You play MORP with your friends, put you push a Morp around the table.

MORP is set in an ambiguous sci-fi post-apoc future where the world map is dotted with thousands of round/ovoid lakes that don't appear on real world maps.  The author explained that in the setting fluff no one remembers if those were cause by the nuclear war or the meteor strikes.  He acknowledged that this was just an excuse to set nearly every battle either on the edge of a lake, with a big ol' lake on the map, or actually on/under the water.  A whole chapter of the rulebook was devoted to lake/lakeside special rules.  You know how some designers just have that special itch they got to scratch?  Bruce Cordell and psionics.  S. John Ross and cooking.  James Raggi and ruining your life.  This guy's game design fetish was lakes.

The rulebook was an interesting object.  It was spiral bound, but at the top of the page rather than the left side.  The pages were stiff, thin plastic sheets or laminated.  And they were cut on the right edge of the page with chapter tabs always visible, like some dictionaries do.  Without every mentioning who they were talking about, an appendix gave complete rules for converting your 40K and WHFP figures to MORP standards.  After that was an appendix devoted to building MORP stats for any miniature you care to use in the game, based solely on what the figure looks like.

The game was new and the designer had managed to only get a few official figures manufactured.  He had two factions painted up on the table.  The first were these cyberpunk guys that looked like Duke Nukem but with trench coats and heads sprouting electronics gear.  The other were these anime girls in skimpy bunny costumes.  All their guns were shaped like bananas.  The author handed me a flamethrower trooper to inspect.  Imagine Omaha the Cat Girl but a pink bunny costume holding a big yellow 'nana with a hose to a fuel tank strapped on her back.

Back when I was a kid just getting started in the hobby, we tried out a lot of different role-playing games.  Mostly we experimented with TSR stuff: Boot Hill, Gangbusters, the original Marvel game, Gamma World, Star Frontiers.  We never quite got a successful campaign up and running for any of these, instead falling back to D&D quickly after starting any of them.  We had some more success with a couple of non-TSR games.  The Call of Cthulhu campaign I ran off and on for our last couple of years of high school was one of my earliest real successes as a referee.  Our brief flirtation with Middle-Earth Role Playing (a.k.a. MERP) also produced some good results. 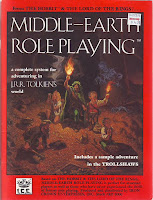 In some ways, MERP was an odd choice for the group.  We had 1st edition AD&D and both BX and BECMI D&D.  We hardly needed another game involving swords and orcs.  But Dave was super into Tolkien at the time and his mom was convinced that Satan was on the payroll at TSR, so for a while we MERPed it up.  At least until the session that one d-bag sorcerer caught the entire party in a fireball and everyone took a C heat critical.  The gang was ready to go back to D&D after that.

The older I get the better MERP looks to me.  Sure, it's more complicated in some ways than D&D, but it also has an elegance of design all its own.  The relatively slow chargen combined with the deadly crit results plus holy-crap-orcs-are-3rd-level punished freeform mayhem in a not-uninteresting way.  And if you're going to hang your hat on a single setting, why not Tolkien?  All in all, MERP is one of a handful of non-D&D/non-clone fantasy RPGs I can get excited about nowadays (others include WFRP and DCC rpg).  It's sleek.  It knows what it wants to accomplish.  It doesn't mess around.

One passage early in the rulebook (paragraph 4 of section 1.0 Introduction, to be exact) has intrigued me for a long time:


In addition, I.C.E.'s Rolemaster Systems provide an expanded combat system, an expanded spell system, a more flexible character development system, and guidelines for a campaign game or larger scale game.  These systems allow MERP to be expanded to handle higher level characters and to increase the variations and options available to the Gamemaster and the players. 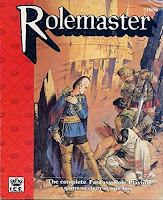 Note the key plural in both sentences.  Rolemaster Systems.   Rolemaster is considered a complete role-playing game today (perhaps one of the complete-iest) but when it first dribbled into existence circa 1980 or so it was actually a series of percentile dice using, universal, "for any fantasy RPG" type supplements.  You bought Arms Law as a separate booklet, for instance, if you wanted to up the ante to your D&D game by adding vicious critical hits for various weapons.  Spell Law gave you a bunch of new spells, organized into thematic lists that went well past 9th level.  I can't vouch for the 1st edition of Spell Law, but by the second edition many spell lists went to 100th level.  Character Law gave you an even more complex system for character stats and skills.  However you want to beef up your game, there was a Law for that.  Box the various booklets all up together with a module and you had the complete Rolemaster rpg.

MERP was written after the earliest Rolemaster releases and represents a solid attempt to streamline and cut down the system.  For example, in Rolemaster you had to develop each weapon skill separately, but in MERP there are only 6 weapon skills: 1 handed edge, 1 handed concussion, 2 handed, thrown, missile, and pole arm.  Rolemaster had literally more character classes than I can remember.  MERP has only six: warrior, scout (thief), ranger, bard, wizard, animist (cleric/druid). In short, the mechanical relationship between MERP and the full Rolemaster game was akin to that of Basic D&D and Advanced. 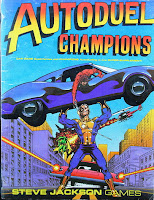 But the advice in MERP wasn't "Hey kids!  Once you hit 10th level you'll need to start playing Rolemaster!"  Remember that plural "systems."  Implicit in the quote above is that the players need to figure out what parts of Rolemaster they want to incorporate in their game.  It is an open invitation to hybridize the game you are holding with another game.  In the modern era of bigass product lines, this is a super uncommon thing, but the further back towards the dawn of the hobby you travel and the more of a necessity it becomes.  That's why you get things like the section of the 1st edition DMG that tells you haow to mash up AD&D with Gamma World and Boot Hill.  Or Autoduel Champions, a supplement designed to allow HERO System supers to fight Car Wars vehicles.  The Interlock system, the strange baby of Cyberpunk and Mekton, attempted similar work.

One of the earliest published examples of this sort of hybridization would have to be Gary Gygax's "Sturmgeschutz and Sorcery, or How Effective is a Panzerfaust Against a Troll, Heinz?"  Originally published in volume 1, number 5 of The Strategic Review (precursor to Dragon magazine), "Sturmgeschutz" tells the story of an OD&D Evil High Priest and his monstrous minions wrecking the shit of a Nazi patrol from TRACTICS,  a set of WW2 minis rules published in the early days of TSR.  If you need official OD&D rules for a bazooka or a 105mm cannon, this article is the closest you're ever going to get.

As Ron Edwards notes in his essay "A Hard Look at Dungeons & Dragons," hybridization was basically a requirement to get early versions of D&D up and running.  My own experience as part of the 2nd wave of snot-nose kids brought in by Moldvay Basic is a long history of using BX with bits of AD&D with whatever we thought was cool in Dragon.  We didn't understand what we were up to back then.  We were just trying to do D&D "correctly."  (Here's a hypothetical scenario that is much less messy than my actual experience)

Nowadays, I tend to intentionally pick and choose drips and drabs of various rules when putting together a new campaign.  I didn't start conceptualizing the game quite that way until encountering Edwards's essay, which is why--even though I don't agree with his overarching theory of RPGs--I consider "A Hard Look" formative to my active participation in the OSR.  Edwards made it clear to me that earlier modes of play were being under-served by the mainstream D&D circa 2003, so I started to actively investigate those other ways of doing D&D.

I want to end this ramble with some questions aimed particularly at any hardcore MERP/Rolemaster players who might be reading this.