the OSR as a subject of scholarly inquiry

The other day I was wondering how Nicholas Mizer was doing. He played the elf Celumir the Bald (I hope I'm getting that PC name right) in my first FLAILSNAILS campaign, the one set in Wessex. If I am recalling correctly, Nicholas was the one who solved the Mystery of the Blue Lobster.

Around that time he did a crowdfunding campaign to raise some funds for his PhD research on tabletop RPGs. Out of the blue last week it occurred to me that I wanted to see what had come of that.

First of all, I found his dissertation. So congrats on finishing, Dr. Mizer. Also, he has a book out now, which I am going to try to convince my school library to buy.

I also found a couple academic articles Nicholas authored and a book review that was interesting to me professionally (Turns out there's an edited volume with chapters on RPGs and education. I smell a new faculty workshop in my future.). I forwarded a co-authored piece on an economic game to my buddy who teaches behavioral economics. He was pretty stoked, as the piece had been published in an anthropology journal and he had not seen it before.

Nicholas's 2014 article "The Paladin Ethic and the Spirit of Dungeoneering", published in The Journal of Popular Culture, is a really compelling piece. The conclusion contains what I suspect is one of the first mentions of the Old School Renaissance in an academic journal.

Now I was down the rabbit hole. I decided I needed to know if there were any more recent articles about the OSR. I found one, "Old School Renaissance as a Style of Play" by Tommi Brander of the Norwegian University of Science and Technology. The analysis is a little bit water-is-wet to anyone who actually plays old school style, but water-is-wet research is important. Playing isn't the same as documenting for the outside world, after all.

Anyhoo, I thought you all would be interested in who from the scene is cited in the article:

There are some pretty rad people on the list above. I am, of course, jealous. These are only the old schoolers mentioned in the piece. (Also appearing: Vincent Baker.)

What is a little more alarming is the amount of GNS in the article. John H. Kim, Brian Gleichman, Ben Lehman, and especially Ron Edwards are cited in this regards. Brander uses the threefold model to analyze old school play, which is totally legit to me. What concerns me is that a non-specialist, even an academic who studies mainstream D&D for a living, could easily conclude from this article that GNS and the associated people are part of the OSR.

But to circle back the the beginning: nice work, Nicholas!

Many moons ago Brendan over at Necropraxis wrote a very smart blogpost called Overloading the Encounter Die. Marcia B. of Traverse Fantasy took the concept, expands it a bit, and remediates it into a threefold pamphlet called TURN. Since both original post and pamphlet are super short, I will not summarize them here. Although I found Brendan's idea to be very good at the time, I never implemented it. I'm not sure why. But in pamphlet form as TURN, I find it much more compelling. As in, I want to make it standard for my next dungeon campaign.

Some ideas just need the right packaging to speak to some people, I guess.

Traverse Fantasy also has a restatement/reinterpretation of OD&D called Fantastic Medieval Campaigns, but I haven't read it yet. Also, I discovered while writing this post that Marcia B. has a Traverse Fantasy blog and this post is an absolute winner.

The Orcs of Asgard

I've talked about Asgard Miniatures a few times in the past. They used to run great full page ads in Dragon back in the day. I'm fond of several of their 25mm adventurers, particularly the Looter, their half-elf, and their magic-user. The latter is actually wearing a backpack and has some coiled rope. Not enough dungeoneering minis are properly equipped like that.

Today I want to talk about their amazing line of orcs, sculpted by Jes Goodwin. He went on to do big things with Citadel and Games Workshop, but his vision of orcs do not align with Warhammer big green goons half-inspired by the Incredible Hulk. Check these dudes out: 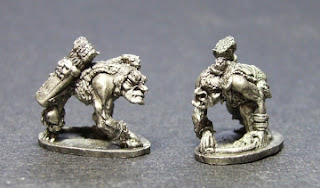 Many of the figures of the line are hunched over. Between that and their long, disproportionate limbs, you get a real inhuman vibe off of them. Yet their faces are at least as expressive as any human mini of the era. These orcs are uncanny not-quite-men. 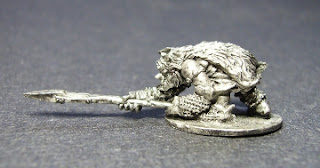 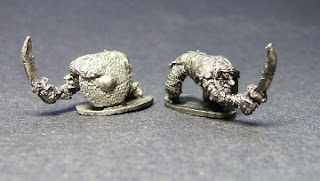 Some of Goodwin's orcs are bent so far forward so as almost to be prone. Tolkien's idea of orcs as degraded elves almost radiates from these poses. Yet they also possess a weird suppleness. It's almost sensuous, like the serpent in Eden.
These pictures are from thevikingforge.net, which seems to be selling the Asgard fantasy line at 1980's prices. Of course, the website design looks like state-of-the-art 1992, so it may just be hopelessly out of date.

Here's a pic of some painted Asgard orcs I found just googling for additional photos: 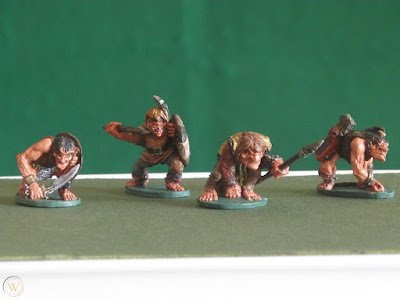 With those poses I can readily imagine the lot of them lurching forward like Gollum or the feral boy in the Road Warrior flicks. Also, I love the choice to use human skin tones here! I've often fantasized that--if I ever got into Warhammer Fantasy--I'd paint up an ork army in Caucasian skin tones just to troll my opponents.

a major network in BX 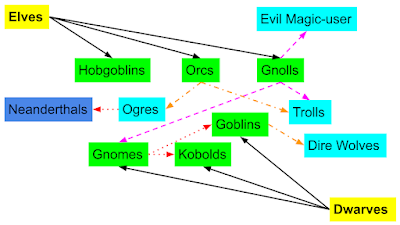 Elf and dwarf PCs in BX D&D begin play speaking three monster languages each, as shown on the chart above using arrows with solid black lines. That means you are taking away a class ability if your campaign doesn't include those monsters (or, say some books or inscriptions written in their tongues).
The BX write-ups for four of these six monsters mention other monsters. These are the monsters in the blue boxes.  The red arrows with the dotted lines indicates belligerence.  The purple arrows with dashed lines indicates that these creatures figure into the gnolls' reputed origin story. The orange arrows with dashed and dotted line points to a buddy that sometimes hangs out with the monster.
It is my opinion that these relationships define the core monsters of a by-the-book BX campaign. Well, these folks plus the undead (so the cleric has something to turn).

If dwarves "hate goblins, and will usually attack them on sight" (B35) and goblins "hate dwarves and will attack them on sight" (B36), then why does every dwarf PC start play fluent in goblish? This is a question I have taken too seriously off and on for 40 years now. (Related question: If a PC party has six PCs and one of them is a dwarf, will a wandering group of 5 goblins automatically attack?)
The first answer I landed on back as a kid was that dwarves liked insulting goblins in their original tongue and found it handy for interrogating goblin-prisoners.
The second answer I arrived at back when I started digging into OD&D and Chainmail: The quotes above are holdovers from the early fantasy miniatures campaign. I.e. these "attack on sight" indicators are meant for massive of troops in battle. If one side brings dwarves and the other side brings goblins, don't expect to be able to control those troops. They'll be too busy annihilating each other like matter and antimatter. The rest of the time there may be tensions between the two peoples, but they don't automatically boil over into hostilities.
My most recent answer builds on the second: Demi-humans and humanoids interact peaceably a lot more than I suspected as a kid. That's why elves and dwarves speak so many humanoid tongues. But recently something horrible has happened between gobblefolk and dwerpeople. This bad blood is new and raw. Determining the source of this rage will help you shape your campaign. 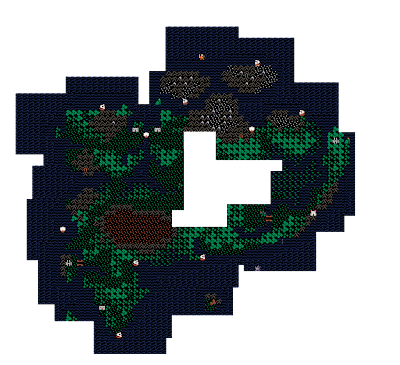 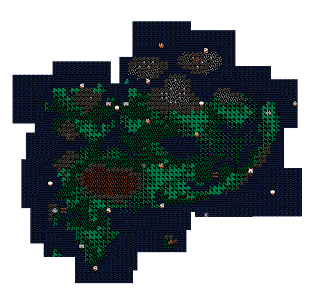 I keep forgetting to mention this. 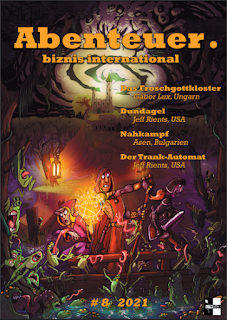 Many moons ago Settembrini, Germany's foremost old schooler, ask me for some material that could be translated into German for the gaming periodical Abenteuer. I sent him a level of my old Wessex dungeon all typed up and an entirely new piece on a magical soda vending machine. 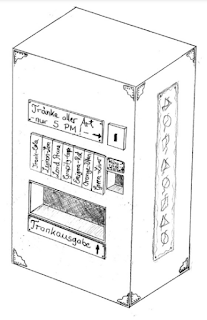 I really dig Betty Baindl's illo of my dumb idea.
DriveThruRPG has the PDF of the issue, if you are interested and can ready German. In all probability, the Gabor Lux material is oodles better than mine.

time to get weird

for the Encounter Critical fans