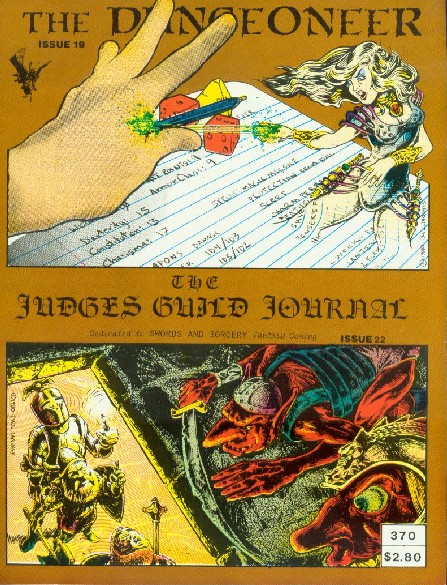 The Dungeoneer #19/Judges Guild Journal #22 is an odd duck of a magazine.  The Journal was the flagship periodical of the Guild, while the Dungeoneer began life as one of the early D&D fanzines, this one launched by the great Jennell Jaquays and friends.  Jaquays et al. produced six issues before they sold to Bob Bledsaw.  (JG also reprinted the first 6 issues as a single book usually called Dungeoneer Compendium, though the cover says its The Dungeoneer: The Adventuresome Compendium of Issues 1-6.  Whatever you call it, I rank it right up their with the first 3 Arduin Grimoires as one of the best supplements from the good ol' days.)

The Guild decided to merge the two publications and this is the first issue of the merger, hence the two half-covers.  Take a moment to enjoy the cover art.  I don't know which I like better, the spell lady magic missle-ing the hand that created her, or the party looking up into the hole in the ceiling, not knowing some red gobliny dudes are waiting up there for them.  (Extra nerdy note:  The character sheet in the top illo is clearly from an OD&D game that used Supplement I: Greyhawk.  Score an extra nerd point in the comments by explaining how I know that.)

After this weird hybrid, the next three magazines put out by Judges Guild would be issues 23 through 25 of The Dungeoneer Journal, followed by issue one of Pegasus.  The latter magazine ran 12 issues.  An issue #14 came out in 1999 and #15 was, I believe, a PDF only from around 2004.  Did Pegasus #13 ever get published?  I honestly don't know.  What I do know is that while I've never been a collector of Judges Guild campaign installments or Journals, I've never been disappointed with issues of Dungeoneer, Dungeoneer Journal, or Pegasus.  As a whole, I give these periodicals two hearty thumbs up.

I'm not going to run through everything in this issue, because I intend to focus on one article.  But here are some of the other cool things inside.

None of those articles or the ones I haven't mentioned are why I started this piece.  Instead I want to talk about Kevin Fortune's "Using Klutz Factors."  This is a short piece in the long tradition of making magic-users roll dice to cast spells.  I've tackled this sort of thing before myself, as have many others.  What I want to give to you today is NOT a simple transcription of Fortune's system, but a slightly spruced-up version.  My two main objects with the system as presented are 1) too many percentile rolls and 2) some multiplication of percentages.  By switching to mostly d20-based rolls and adding an extra chart to remove the math, I feel like the result preserves the spirit of Fortune's system while trimming the fat considerably.  I've also limited myself to the first 14 levels of experience and 6 levels of spells.  Gandalf may have been higher than 5th level but I don't care much about anything higher than Expert level anymore.

I. What You Gain

No magic-user likes limitations on their power and this system, which requires a casting roll for every spell, is pretty limiting compared to a lot of versions of D&D.  However, it comes with one big advantage for MU's: you may keep casting the same spell but the Klutz Factor doubles each time, until a Klutz effect (a fumble) prevents you from casting again.  This system actually sounds like it would work well for those BX referees who stick to the hard version of the spellbook rules, which say that if your MU can cast 2 first level spells a day and 1 second level that is the maximum number of spells allowed in your book (see page B16).  Some DMs might even want to forbid players from doubling up on spell memorization under this scheme (e.g. no 2nd level MUs memorizing 2 sleep spells).

II. What You Need to Track

Each MU has a Klutz Factor for each level of spell they can cast.  This is a three variable factor, so in a 2-d presentation like this screen, it'll take two charts to get to.  Every time your MU changes INT or their level, you'll need to look this back up.  Use Tables 1 and 2 to find your character's Klutz Factor. 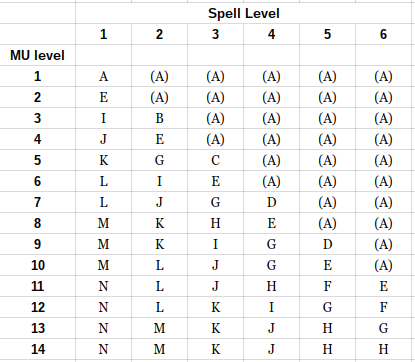 The A's in parentheses are spells someone of that level shouldn't be able to cast.  They don't figure into Fortune's original tables, but I added them in case you wanted someone to fumble a high level scroll under this system or something like that.

Once you have the letter code for each spell level you can cast, cross index the result on Table 2 to find the Klutz factor for each level of spell your MU can cast.  You should probably record this number adjacent to the spells/per day indicator on your character sheet.

This Klutz Factor is a d20 thing.  When an MU fails to cast a spell you've got to roll over this number to avoid a spell fumble.  Every subsequent time you cast the same spell in a day, this number doubles.  That looks absolutely disastrous for low-INT magic-users, but you need to blow the casting roll to even reach this point in the process.

One of the downsides of this system, probably the one that trips me up the most, is that you need to look this stuff up for NPC magic-users.  Since I'm super lazy about such things, here are all the Klutz Factors for an MU of 11 Intelligence. 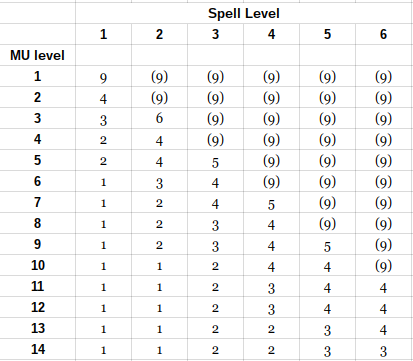 Example: Andrigal of the Weeping Beard, a 3rd level MU, attempts his second web of the day.  His normal Klutz Factor, as a default Int 11 NPC, is 6 for second level spells.  Since he has attempted web once today, his Klutz Factor is doubled to 12.  His chances to cast are the same as always (see below), but if he fails the casting roll then he will fumble the spell on a second d20 roll of 1-12.  Note that his 3rd and subsequent web spells of the day are all going to be fumbles IF he blows the spellcasting roll, but he can risk it as many times as his shriveled heart desires.

Before the Klutz Factor comes into play, Fortune's system calls for a casting roll similar to that employed in Chainmail, but d20 based and expanded to cover a wider range of levels.  On the chart below an I indicates Instantaneous success (the spell goes off), a D indicates a Delay, the MU must keep chanting and gesticulating for d3 rounds before the spell goes off (d3 turns for non-combat spells), and an N indicates No Effect.  According to Fortune's system only when a No Effect occurs is the Klutz Factor check made.  Though I'd also consider using Klutz Factor rolls for when someone took damage while working through a Delay effect.

For many campaigns, it would make sense to allow the players to record these numbers for their character.  But when I've tried a similar system before I kept this sort of info behind the screen because I like to keep some of the workings of magic a mystery to the players.  Note that a system like allows for a campaign where high level casters don't necessarily reshape the world in their image.  Wizards know that high level spells are unpredictable enough they should only be used in emergencies.

I've added the numbers that are highlighted/in parentheses for situations like a low level MU casting a spell directly out of some higher level character's spell book. 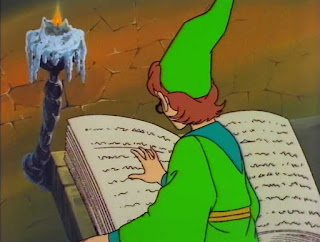 Okay, so your favorite pet magic-user has rolled an N effect on their casting roll and then rolled high enough on the follow-up d20 that a fumble has occurred.  Throw a d10 and consult the chart below to see what actually happens.

Obviously once you have the whole system in place this last chart is the sort of thing that can be added to and/or modified to suit the spirit of the campaign.  Also, Fortune includes a few lines about overcome the fear effect of number 10, but it references the mechanics "Bravery," "character roll," and "Conversion Chart" without explaining what those things actually are.

So there you have it.  Another system for making MUs more complicated and a bigger pain in the ass to play.  I'm normally pro-MU and anti-complication, but I'm also pro-rolling more dice and anti-magic is as reproducible as a grade school science demonstration.