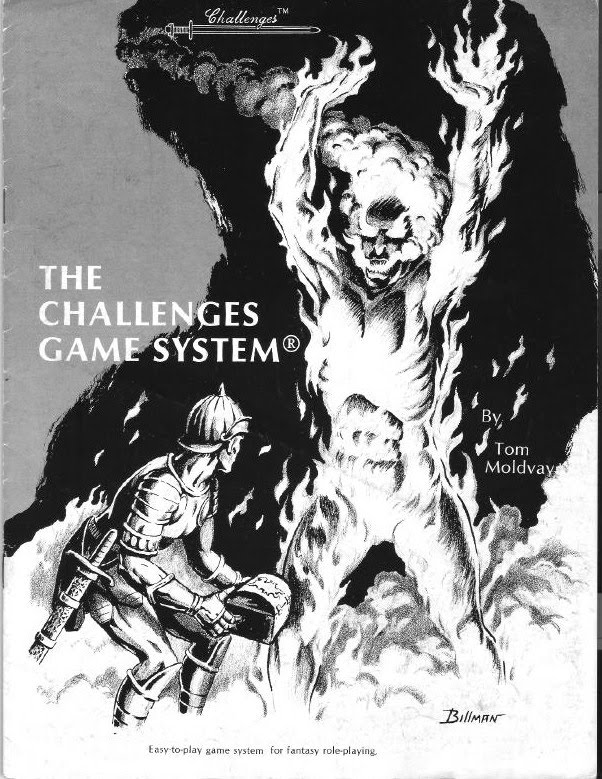 The Challenges Game System was an 8 page restatement of D&D written by Tom Moldvay.  James Maliszewski has a brief rundown of the game here.  The one place where Moldvay seriously complicates his otherwise streamlined system is with the attack table.  It's an interesting one-roll alternative to fumble and crit charts, so on a whim I decided to rewrite it for Lamentations of the Flame Princess.


Putting the Hurt on the Monsters


Every character has a number called their net Attack Bonus or simply Base.  This number indicates how effective you are when engaged in combat with some foe.  It starts at +1 for all characters.  Attack Bonus can be modified by many factors.  Good factors, such as wielding a Magic Sword,  increase Attack Bonus while bad factors decrease it, like fighting while suffering from one or more Wounds.


Every character also has an Armor Class (AC), indicating how hard it is for a foe to strike you in combat.  A normal person in normal clothing has an Armor Class of 10, with higher numbers being better.  Factors that can improve (increase) your AC include a high Dexterity score, putting on some armor, and using a shield.  While some monsters also wear armor (which you can totally steal if you defeat them), other monsters often have an AC that reflects their scaly hide or supernatural invulnerability.


When you attack a foe you roll one twenty sided die (d20) add your Attack Bonus and subtract the foe’s Armor Class.  The net number is your Attack Result.  A higher number indicates a better strike to the foe, while a lower number indicates a weaker strike or an outright miss.  To figure out the exact effects of your attack, subtract your Target Number from the actual Roll and consult the Attack Chart below.

EXAMPLE: Brother Hubert (a first level cleric), Lucas of the Invisible Sigil (a second level magic-user),  and Dulcia the Mighty (a fighter of third level) are exploring level two of the Festering Pits of Granfalloon when they find themselves face-to-face with 4 ornery gnolls.  An attempted parley falls flat, largely because the Gnolls speak no Common and the party doesn’t know any Gnollish, but also because Hubert’s body odor offends the nostrils of the monsters.  Weapons are drawn and combat ensues.  The party wins initiative the first round of combat, so Lucas of course throws his remaining Sleep spell.  Lucas rolls and gets a measly, pitiful 4 hit dice of effect, sending only 2 of the Gnolls to nighty-night land.  Brother Hubert and Dulcia sneer at Lucas’ paltry spell, then move forward to attack the remaining pair of active Gnolls.

Brother Hubert moves forward and attempts to brain one of the gnolls with his trusty mace.  His Attack Bonus is +1 versus the Gnoll’s Armor Class is 15.  Brother Hubert rolls a 12.  12+1-15 equals an Attack Result of -2.  That’s a weak ass hit for d6 divided by 2.  Brother Hubert rolls d6 for damage and gets a five, which is halved to 2.5 and rounded down to 2 points of damage.  Dulcia rushes the other gnoll, swinging her sword with precision and force.  Her total Attack Bonus, including a bonus from a high strength score, is +5.  She rolls a 14, for a net Attack of +4.  Her total damage is d8 (sword) +1 (high strength) +4 (attack result) or 13 points.  That’s not quite enough to kill this tough 15 hit point Gnoll, so he also suffer a Light Wound (-1 on to-hit rolls, saves, etc.).


The referee now checks morale for the Gnolls, but dice say the dimwitted brutes stay and fight.  The Gnoll fighting Brother Hubert comes at the cleric with a wicked axe.  He has a Attack Bonus of +3 against Brother Hubert’s terrible AC 13 (Hubert’s wearing Chain but suffers a -2 Dex penalty, because he sucks) and rolls a pitiful 6.  That’s 6+3-13 or an Attack Results of -4.  That’s a straight-up Miss, no fancy pants extra effects.  The other Gnoll attempts to cleave Dulcia in twain.  She’s wearing chain with shield, for an Ac 16.  Same Attack Bonus (+3) with a roll of 13.  13+3-16=0.  But wait!  Dulcia reminds the referee that thus Gnoll has sustained a Light Wound, knocking that 0 to a -1.  That changes a normal Hit to a weak -2 damage Hit.  The referee rolls 5 points of damage for the Gnoll, reducing it to 3 points.  Dulcia has 16 hitpoints normally.  She’s down to 14 at the start of this encounter due an earlier bite from an irate squirrel, so now she has 11 hp remaining.


Everyone has acted for round 1.  Initiative goes to the Gnolls.  The Gnoll going after Dulcia rolls a pitiful 4, for 4+3-16=-9.  Not only does this poor bastard miss badly, but he blows his saving throw and sends his clattering across the floor of the dungeon.  There’s a ledge nearby that leads down to the next level, so the DM rolls a 1 in 6 chance it goes over the edge.  A roll of 1 sends the axe down to level three.  The DM secretly rolls a wandering monster check to see if anyone down there notices.  He lives for crap like that, but no monster appears.  The other Gnoll, the one attacking the cleric, does much better, rolling a 12.  That comes out 12+3-13=2.  That’s a strong hit for a total of a whopping 9 points of damage.  Smelly ol’ Hubert only has 6 points, so the DM rules he is chopped in twain from stem to stern, covering all other participants in a gruesome rain of blood and guts.


The wizard Lucas was going to slit a sleeping Gnoll’s throat this round, but seeing Hubert go down he opts to throw his dagger at an upright baddie.  His Attack Bonus while throwing is +1, he rolls 14 for 1+14-15 equals zero.  That’s a normal hit, no nonsense.  Lucas rolls 2 for damage, but due to low Strength that get docked to 1 point of damage.  The DM narrates some feldercarb about the Gnoll pulling the dagger out of his shoulder and licking the blood off with his hideous hyena tongue.  Dulcia asks the DM if she can righteously avenge her good buddy Hubert.  The DM knows this is a ploy to attack a threat rather than wasting a round with the now-unarmed, wounded Gnoll in front of her.  Just to be a dick, he makes her throw a Dex roll to switch targets quickly, which she easily passes.  Her attack roll against Hubert’s killer is a massive 17.  The math for that is 17+5-15 for a Attack Result of +7.  That’s a helluva a hit, for +5 damage and a Serious wound.  The total damage is 12, which is enough to kill this Gnoll.  That’s the end of round 2.


Initiative for Round 3 goes to the remaining Gnoll.  The DM does not roll another morale check.  He just rules the last guy runs like hell.  Since he has a Serious wound, that grants a -3 penalty to stuff, the DM rules that he is moving 3 points slower than usual.  The party could catch up, but they opt not to pursue.  Hopefully that won’t result in a crapton of Gnolls coming down on them later in the adventure.


So that’s how it might play out to use this chart. As with any addition to D&D-style combat, it adds some complexity which will slow things down. But with the chart on your DM screen and/or the charsheets, it should be easy enough to integrate this stuff.