RPG Covers is a great little tumblr.  It does what it says on the tin, offering cover scans of various RPG products.  Here's one old cover posted a week or so ago: 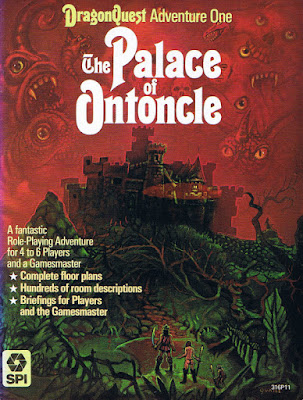 SPI was one of the great historical wargame publishers during the period that gave birth to D&D.  Their magazine Strategy & Tactics was required reading for the hex-and-chit set, especially since it came with a new game in every issue.  DragonQuest was SPI's attempt to get in on the fantasy rpg market.  I don't really know anything about it, other than it wasn't particularly successful.  Nor do I really care about it that much.  DragonQuest was just one of a gazillion competitors in the field of sword-and-orc games that sprung up in the wild early days of the hobby.

The cover to The Palace of Ontoncle interests me, however.  The artist is Matthew Quayle, I believe, and his work here does what I really like to see with site-based adventure modules: put the adventure locale front and center.  That big sprawly castle with the threat of monstery doom looming over it is exactly the thing I want to see on the cover of a module.

The other thing I like about this sort of cover is that the artist often sneaks in an adventuring party approaching the adventure site.  Because the location itself is the focus of the piece, these figures are often smaller and less detailed.  The abstraction of the figures actually helps make it easier for players to imagine themselves as the adventurers approaching this exciting place.  Scott McCloud talks about this effect a bit in Understanding Comics.
I also like seeing what someone--the author, the editor, the art director, or the artist--imagines as the kind of people who would investigate the adventure location.  Here's a detail from the Ontoncle cover: 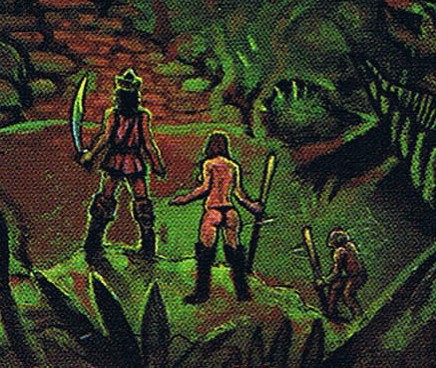 So we have three party members here.  Dude with scimitary sword, leather armor (or maybe just a tunic), and a stupid-looking hat/helmet.  Nearly naked sorceress type.  And a third character that is maybe supposed to be a dwarf or halfling, but that looks more like a monkey to me.  Are monkeys a playable race in DragonQuest?  Overall, this trio is not a supergreat example of "you can play these people" figures.  The fighter or thief type guy looks dumb, the demihuman is dubious, and I don't think I've ever met a gamer gal who wanted to play a naked wizard lady.  (Though the female figure obviously has some cheesecake function.  I must admit "hey is that chick naked?" was one of the first thoughts I had looking at this cover close up.)

Here's the classic example of this kind of gaming art, the Erol Otus back cover of B2 The Keep on the Borderlands. 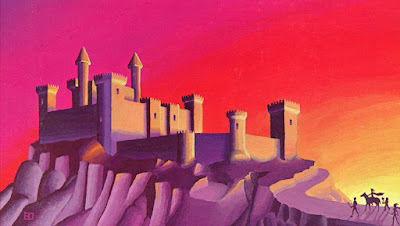 Aw, yeah, dig those great Otus colors.  The sun rises on the dawn of a new day just as this adventure serves as the beginning of a promising adventuring career.  Now let's zoom in on the bottom right corner:

The character with the axe is very probably a dwarf, but could be a short human or a halfling with a hand axe.  The lead character seems to hold a sword, but could be a fighter or thief or an elf.  The figure on horseback could be just about any human or elf.  The slender, caped figure in the rear of the party seems to be a woman, but she could be an elf or a fighter or a thief, maybe even a magic-user with a wand.  By using small figures in silhouette, Otus is inviting us to imagine our PCs, our other selves, into this scene.  This isn't a specific party depicted here, but Anyparty.

Let's look at some other, less clear-cut examples: 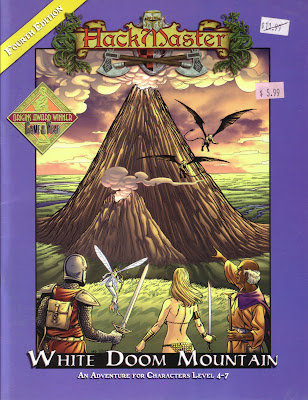 White Doom Mountain is the Hackmaster 4th edition version of the AD&D classic White Plume Mountain.  The eponymous volcano is the main feature of the cover by William Church, but the party is seen in the bottom third of the cover.

I like that the generic fighter here carries a backpack, even if it is the smallest such item I've ever seen in a D&D illo.  It's only one step up from a fanny pack, for crying out loud.  But at least it's something.  Blonde Sonja didn't bother to bring so much as a scabbard for her blade.   She's clearly cheesecake, but unlike the topless witch above, I've known a few female players to go for this kind of character.  And why does that wizard not have a beard?  That's just embarrassing, man.  I like the presence of the pixie-fairy PC, as that helps communicate something about how this game is different from D&D.  Still the overall effect is that these characters are a specific party, rather than stand-ins for your party.

Making this party larger in the foreground does achieve the effect of allowing the viewer to imagine themselves as the fifth member of the party, just a few steps behind the rest of the group.  That ain't bad.

Here's another SPI product, cover by Redmond Simonsen, I think.  This is a D&D-like boardgame.  I've never played it but it was written by Greg Costikyan, who is no slouch at game design. 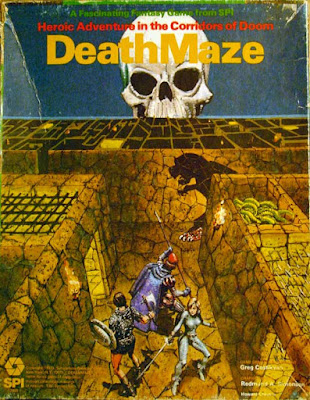 Finding the PCs already in the dungeon and emphasizing the architecture of the labyrinth itself is its own subgenre here.  For other examples see the covers to the dungeon geomorphs from TSR and Goodman Games, as well as the Otus cover for the Dungeon Masters Adventure Log.  (In fact, this sort of gaming art probably deserves its own post.)

Anyway, let's look at the party in the DeathMaze: 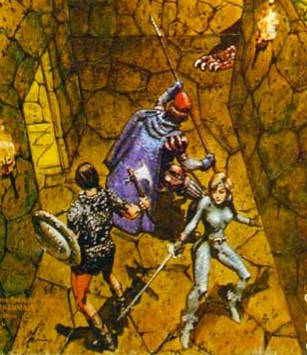 Two characters are facing away from the viewer, as with most of the figures in The Palace of Ontoncle and White Doom Mountain.  This helps depersonalize the characters and makes it easier to fill in the figure with your own PCs identity.  The pantless warrior is a pretty generic fight guy, with ax, mail, and shield.  His lack of leg covering is his only distinguishing trait.  (Activity time: check the character sheet of the last fighter you played.  Is 'pants' written anywhere in the equipment list?)  The guy with the spear has some pretty distinctive renaissance-style dress, with a sweet cape and poofy sleeves and presumably stupid hat.  The spear seems wildly out of place with the outfit, which is why they go together perfectly in the mishmash that is stock vanilla fantasy.  The buxom lady with the rapier is fully clothed for a change, though the superhero spandex cheat is in full effect and her outfit is painted on.  It could be grey cloth or skintight chainmail like Morgan Ironwolf wears.  Unlike her compatriots, she seems more designed more to be looked at than imagined into, though to a less egregious extent than the woman on the Ontoncle cover.

Anyone else have any good examples of covers with adventure architecture featured prominently, but a party also present?

Merry Christmas!  In the spirit of the season here's a post all about murder technology.

The biggest change in weapons rules in LotFP is that melee weapons have been more abstracted.

There are four categories, Great weapon, Medium weapon, Small weapon, and Minor weapon. If your melee implement requires no special rules, you buy one of these and designate it a sword or axe or whatever. This makes it easy to customize melee weapons to your campaign and your PC. I could see some people in some games going hogwild with these rules and decide they are using chainsaws or heavy books or a bar of soap in a sock.

Anyway, here's a chart comparing the BX weapons to their LotFP equivalents. Note that LotFP equipment tables include two columns for prices, the cost in the city and the cost in the country. Some items are not available in one of the other. Starting PCs use the cheaper cost of the two, which I have done here.

*I should note for accuracy that variable weapon damage is optional in BX.  The default is all weapons do d6.

Other weapons available in LotFP that do not appear in BX: cestus, garotte, mancatcher, rapier, whip, blowgun, thrown rock, dart.  These all seem serviceable in terms of the rules that govern them and useful additions. Except the rapier. I don't get the rapier. It's a d8 sword that is -2 to hit heavily armored foes. It's only obvious advantage over a normal Medium weapon sword is that it is 5sp cheaper. There's no equivalent of 3e's weapon finess allowing nimble characters to use their Dex mods to attack with them. Unless the referee gives a campaign reason (rapiers are fashionable, other swords are illegal in major cities, etc), there's precious little reason for them to exist.

Early modern guns (and armor) appear in an appendix. The gun rules are realistic enough to be a big ol' pain in the ass, but I could see some PCs carrying a brace of pistols.

When fight time comes around leather, chain, and plate in the two systems offer equivalent protection.  Each upgrade of armor is a 10% shift in attack rolls against the wearer.

The big story of armor is economics.  In BX most newly minted fighters can afford platemail right out of the starting gate.  In LotFP chain is barely within reach at 1st level and platemail is a distant dream.  Magical plus items are basically non-existant, so making it take a bit of play to get the best mundane armor makes a lot of sense.  Also, I like that normal guards and soldiers all probably wear leather or no armor.  Knights and such probably wear chain and only bona fide Important People can afford platemail.

One other difference between BX and LotFP armor is found in the encumbrance rules.  If you keep the number of other items down to 5 or less (ten or less for dwarves) a character in chain can move the same rate as an unarmored man.