Let us talk about Hubris 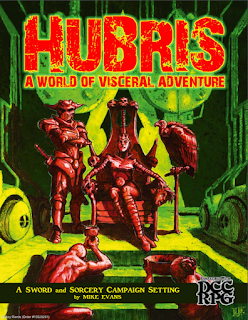 Hubris: A World of Visceral Adventure is a 350 page campaign setting from Mike Evans.  When I first opened the PDF file I hesitated for a moment, because I've reached a point in my life where a two or three hundred page infodump does not meet my needs as a referee.  Fortunately, Mike understands this problem and offers a solution to it.  But I'll get to that in a bit.

Hubris is written for the Dungeons Crawl Classics RPG.  As I get older and more curmudgeonly the number of rules systems involving swords and orcs that I am willing to play seems to be shrinking, but I am totally down with DCC RPG.  DCC RPG isn't a straightforward  D&D knock-off like the retroclones.  Rather I file it mentally with the original Warhammer Fantasy Roleplay as one of the few Not Quite D&D But Still Kicks Ass Like D&D games.

But if DCC RPG isn't your cup of tea, there's still a lot of useful stuff here for the dungeoning dragoners of the world.  My favorite parts of the book require no real changes whatsoever, while much of the rest can be adapted with just a little tinkering.  If what I describe below interests you at all, don't let the DCC RPG logo in the corner keep you from checking this bad mammajamma out.

As I paged through Hubris I got a very specific vibe from it.  That vibe is playing D&D inside the World of Heavy Metal Album Covers.  Eddie from Iron Maiden would fit into the world of Hubris, as would lycanthropic Ozzy barking at the moon.  Korgoth of Barbaria would probably do well for himself in this setting.  There's fairly little of the green and pleasant lands of renfaire fantasy and lots of emphasis on blood and guts.  Here, try this first paragraph from the 1 page section titled "Setting Summary":


Legend states that Hubris was created from the fetid corpse of a long-dead god. Hubris is a land of terrible creatures, grand inequality, strange and cruel gods, dangerous magic, opulent nobility, destitute commoners, people that have become corrupted and turned to savage beasts, constant wars, and worse.

In short, the world is some fucked up shit.  Maybe the PCs can carve out a small chunk of peace and tranquility for themselves, but mostly the world seems to be designed to be barely survived.  Going mad slowly seems to be about the best result a PC can expect out of this world.

One way Hubris communicates how this world differs from others is by offering a bunch of new options for PCs.  I highly approve this method because new stuff enters play organically, rather than being pooped out in boxed text the DM has to read aloud.  For example, one can learn a lot about the campaign setting by rolling up a set of 0-level losers for funnel play (one of the best ideas to come out of the DCC rpg, in my opinion).  The stock random professions chart for 0-level PCs in the rulebook is pretty standard faux-medieval fare, with pig farmers and blacksmiths and whatnot.  I rolled four times on the Hubris version of this chart and ended with a llama herder, a porter with a bedpan and pee rag, a clockmaker with a pocket full of cogs, and a half-demon advisor with a book of lore.

Similarly, the new classes, equipment, spells, etc., aren't just a hodge-podge of new stuff, but rather a hodge-podge designed to help tell the story of what a strange and terrible place Hubris is.  For example, nowhere else have I seen an adaptation of the Death Guards from The Beastmaster:

Not only do these freaks exist in Hubris, but they are called Murder Machines and they are a fully playable race-as-class!  Other stuff you can play include Alchemists, Blood Witches, Druids, Shadowdancers (they literally step out of shadows to stab you), Avarians (bird people), Ekrask (lizard people, hate the name), Half-Demons, and Mutants.  The mutation charts for mutants look pretty sweet.  I love mutation charts.  Though one nitpick I have is that what dice you are supposed to throw for a chart isn't always clearly labeled; at first I thought one of the charts was missing the first line, but it turns out it wasn't a d100 chart.  It was a 2d30 chart.

The new weapons section includes wheelock firearms but also totally kewl weapons like the spiked chain and the double-bladed sword.  There is a disturbing lack of rayguns, but nobody's perfect.

I feel like it says something important about the setting that the new equipment section lists 6 different quality levels for prostitutes one can hire, ranging from Exquisite to STD Waiting to Happen, but only 4 levels of quality for meals, 3 for inns, and 2 for bottles of wine.  Cheese, ale, and tobacco come in but a single variety each.

The real meat of this book is chapter 3, called "Territories of Hubris".  In about a hundred pages ten regions of the world are detailed.  The format here makes all the difference.  Instead of an encyclopedia entry, we get the following format for each locale:

The trick here is that, taken together, this stuff is suggestive rather than comprehensive in nature.  Pick a region (or roll d10), throw percentile dice a couple of times, and select an adventure hook.  The result isn't a complete adventure but it is sufficient to launch sketching out an evening's gameplay.  You can't move across this world strategically and explore every nook and cranny, as one could with a numbered hex map style campaign book, but you can easily achieve the effect of the Ace paperback version of Conan the Barbarian, where individual adventures are loosely connected.  I'm quite taken with this approach.  It makes me rethink what the heck I'm doing with my own campaign setting.

After this great section we get new spells, patrons, and gods of the setting.  The mechanics here go into the deep end of the DCC RPG, but there plenty of fluffy setting material that can be easily used in other games.

Chapter 6, "DM's Tools and Charts" is another highlight of the book.  There are lots of random charts throughout the book, but here's a whole chapter of them, most of which can be easily stolen to liven up a non-Hubris game.  Here's the list:

Ancient and Forgotten Demigods
Bandits, Brigands, and Rapscallions
City District Generator
Diseases of Hubris
Grave Diggin'
NPC Generator
Planes of Hubris
So You Decided to Make Camp
Strange and Interesting Herbs of Hubris
Tavern and Inn Generator
A Vial of…?
Instatown/Village Generator
What are These Strange and Ominous Ruins?
Declaration of Years

My fave is the Grave Diggin' chart, for when the PCs start robbing the deceased and you've got nothing planned.

Then we get new spells, new monsters, and a couple of introductory adventures.  One is a zero-level funnel featuring a crashed meteor that's actually a dungeon (wished I had thought of that) and a first level adventure in which the PCs are charged with murdering a sweet old lady whose hobby is hacking the magical powers of the Spider Goddess for her own evil ends.

The book ends with author Mike Evans' own personal appendix N for the work.  All sorts of media and genres are mentioned here, not just swordy sorcery books.

So that's Hubris: A World of Visceral Adventure.  If you buy into its all-wicked-all-the-time sensibility, then you've got a great venue for running some awesome adventures.  If you don't dig that vibe as the default setting for a campaign world, there's still a lot of usable-at-the-table stuff crammed into its pages.  This is NOT a campaign book designed to be read for light entertainment and then put back on the shelf, but rather a tome full of Here Play This.