Wear it on your sleeve

In my welcome back post I asked folks for suggestions for future posts.  I'm going to start today with Ark's question "howsabout sharing something you've learned as a grad student and how it related to gaming?"

My first thought on that point was that people should really wholesale rip off Charles Dickens for locations, characters and plots to fill out their steampunk games.  But that's probably not a new idea.

But here's something I've been thinking about for a while.  When you're an undergrad on the first day of class the professor probably asks you to stand and say your name and what your major is.  As far as I can tell this serves no purpose other than to make the Undecideds feel bad, because it hardly ever comes up again. 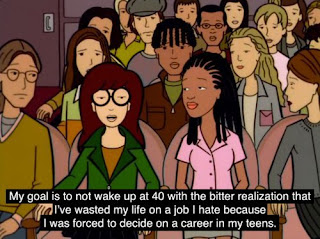 In my grad classes though, we're all studying some form of English something or other so we dig deeper.  I introduce myself as being interested in English lit with a focus on literary hoaxes.  Sam tells us he's into how trauma theory can interrogate postcolonial literature.  Other Jeff says he's a creative writing dude really into hybrid texts.  Etc., etc.  Note that I'm also Other Jeff.  That's hilarious in a world where everyone reads Edward Said and/or Jacques Lacan, trust me.

What I dig about this is that we all get a good foothold up front about where we are coming from.  So like the other day in class I called out Sam on his insistence that pre-colonial texts are "authentic" cultural artifacts.  He knows I wasn't trying to harsh his groove, but that I'm the vaguely postmodern dude who insists that Fake Literature Is Real Literature.  We were able to have what I thought was a fruitful conversation and part of it was due to the fact that we both knew the other guy's priorities.

So you can probably see where I am going with this.  One thing I think good ol' Ron Edwards got right back in the day was the simple recognition that different gamers want different stuff and we should clearly articulate these differences.  I don't fully follow his next step, that we need to craft games to exaggerate certain priorities and minimize others.  Rather I think we can mostly all participate in the same sort of game and see what happens when these priorities push and pull each other during play.

Obviously this requires a little self-reflection on our parts.  When we give a table full of new people a line or two describing our interests, what should we say?  For example, "Hi, my name is Jeff and I'm here to get my PC into trouble" may really help the other players when my dude starts acting stupid.

Most DMs I know like more monsters better than fewer monsters.  Monsters are lots of fun.  Writing new monsters can be a easy way to pretend you're working on your campaign.  Buying books jampacked with new monsters helps keep the hacks in the game industry fed.  It's all good.

But today I want to talk about how to turn the monster list you have into something peppier.  You don't need to write up some new monsters. or buy a new book or even drag an extra monster book to the game.  I'll walk you through three things you can do to make your players' lives hell in a fresh new way, using only the '81 Basic D&D rules as my example.

Step 1 - Throw Stuff Out
Take a look at your monster list and try to get a sense of it as a whole.  What parts of it can be easuly cut?  More monsters isn't better when trying to make a coherent campaign setting.  (Though if you are making an incoherent campaign setting maybe you should skip this step.)  For example, depending on how you slice it, there's maybe 100 monsters in the Basic rulebook.  That's not a lot compared to campaigns with Monster Manuals in play.  But even in this list there's fat to be cut.  Does my campaign world need both Giant Ferrets and Giant Shrews?  Hell, does it need either?

Then there are the broad categories with lots of individual monsters.  How many types of dragon do you need for this campaign?  In my Wessex campaign using not just one type of dragon but one single, individual dragon worked a hell of a lot better for me than any game I've run with lots of dragons.  And if I wanted to do something more Sword & Planet style, maybe I would cut the dragons altogether and prominently use the Draco Lizard (under Lizard, Giant, page B38) or the pterydactyls in the Expert set.

Similarly, not every campaign needs every kind of monster.  Does your campaign need kobolds, goblins, orcs, hobgoblins, gnolls AND bugbears?  Do you need skeletons, zombies, ghouls, wights AND wraiths?  One or two humanoid races and one or two undead may be enough to get the job done.  Or look at the entry for Cat, Great (page B32).  Most campaigns probably can survive without Mountain Lions and regular type Lions and Tigers and Panthers and Sabre-Tooth Tigers.  Just pick the one that suits you and stick the rest on a shelf.

Special warning: Be careful about cutting both orcs and dragons.  Orcs carry a bunch of Tolkienian and Warhammery baggage, but that baggage is something players can easily tune in on.  Or to put it another way, who doesn't like beating the snot out of orcs?  Similarly, dragons occupy an import conceptual space in Dungeons & friggin' Dragons.  Cutting them could alienate a lot of players.  Dropping both orcs and dragons may make some people wonder what the hell kind of artsy fartsy crap you are trying to pull on them.

Step 2 - Reprioritize
Now look at what you have left on your monster list.  What critters have you relied on in past campaigns?  What monsters have you not used yet at all?  As you situate your monsters into your campaign, consider a light touch with monsters you've already used and emphasize the stuff you have yet to take full advantage of.  Looking through the Basic rules I've never or only rarely used Sprites, Weretiger and Rock Living Statues.  Surely there's some great material waiting to be written about those creatures.  Sprites are "very curious".  What sort of trouble could they get into?  Maybe you could write a fairly standard Things Man Was Not Meant to Know adventure, only the trouble is the mad scientist type is actually a gang of magical tinkerbells. Weretigers are neutral lycanthropes.  That says to me you could write an adventure around needing to bring a band of those guys over to your side.  Or maybe you could do something with a Were- version of a white tiger being mistaken by locals as a ghost tiger.  And Rock Living Statues shoot lava from their fingers.  How come I don't use them all the time?

(Seriously, if either weretiger scenario or the sprite idea does anything for you, please steal it.  Every once in a while I get emails from folks "Hey, you mind if I use so-and-so in my game?  I think a lot of gaming bloggers would agree with me that we want you to use this stuff, otherwise we wouldn't share it.)

If you reprioritize your monsters, make sure you think through how this affects other mechanical elements in the game.  If you don't use dragons and focus on Rock Living Statues, maybe you should replace that sword +1, +3 vs dragons with something that beats up lava jerks.  Similarly, making undead less ubiquitous means you need to think about how that pimps over clerics.  Maybe you should allow them to turn something else or *gasp* grant them spells at first level.  Who charm person affects is another issue.


Step 3 - Repurpose
This is where you take the monsters as written and screw with them in some way to make them unique to your campaign.  Not every monster should be an exercise in "Oh, in Jeff's extremely hip campaign orcs are actually corssdressing timetravellers..."  Too much of that robs D&D of the lingu franca status that allows things like FLAILSNAILS to really work.  But a little such monkey business can really give you some neat material to work with.  You can start with little cosmetic things, like making Giant Tiger Beetles literally half beetle, half tiger (or half Beatle, half tiger).  Or making lizard men into full on Sleestaks.  I like giving Giant Crab Spiders big pinchy claws.

You can also think in terms of what ISN'T included in the monster descriptions.  The BX rules don't tell you that Skeletons are unintelligent undead robots or that Owlbears are no smatter than the average bear.  Maybe the skeletons in your campaign can be reasoned with, if you can get them to shut up about how much they miss being alive.  Whiny bastards.  And maybe owlbears actually have mythical owl wisdom and the PCs accidentally murder the Helpful Forest Oracle they were looking for.

And don't hesitate to just flat out steal stat blocks.  Maybe you campaign world doesn't need ogres as such, but if you want to quickly stat up some sort of big angry gronk, there's four hit dice of grumpy waiting to be used.

Howdy, folks!  I'm not dead and neither is this blog.  My first semester as a fulltime grad student has been kicking my ass.  I haven't even had a chance to play any D&D since friggin' August.  But I did get a draft of my Lamentations of the Flame Princess module to Jim Raggi, though I still need to redraw the maps and maybe take one more quick pass on the text.  But it's written.

Anyway, I'm going to try to get back in the saddle with regular updates here.  Either later today or tomorrow I'm going to try to work up something on the canonical monster list in B/X D&D.  Past that, I'm not sure what I'm going to write about next.  Feel free to offer suggestions in the comments.