A common source of confusion and merriment for AD&D1 players is the ludicrous number of polearms detailed on the weapons list.  Every designer has their fetishes and blades on long sticks was one of Uncle Gary's.  Over many years of play, I've seen players make use of only a handful of the 16 polearms statted out in the original Players Handbook, but today I'm going to show you DMs how to use all these crazy weapons as a worldbuilding tool.

This post was inspired by the chart below, which I found on wikipedia, and FLAILSNAILer Shoe Skogan, the only player I've ever seen whose character wields a partisan.
So here's how to do it.  Start by naming 16 different polearm-wielding factions in your campaign setting.  Here are some examples:


Now, arbitrarily or randomly assign each of these groups a Signature Polearm from this list:

So now you know that 10% of the Dwarfs of the Ironbutt Clan wield fauchards.  Big hairy deal.  Here's the next part.

This chart, adapted from the first chart above, is a relationship map.  It tells you who has interacted with each other in your campaign's past.

Items in the same column have had some sort of friendly contact in the past.  If the items in the same column are adjacent, that alliance continues.  If there is another item in between, the friendly contact was long ago.  So the Ironbutt Dwarfs have an ongoing alliance with whoever on your list wields fauchard-forks, and they once got along with the military fork people, but the relationship has cooled for some reason.

The three horizontal lines identify the major factions in three big wars.  The top line is the most recent conflict, the bottom line the most ancient.  The left half of the row were allies against the right half of the row.

Working through this stuff means you should 16 factions, some alliances past and present, and 3 wars that have been important to your campaign world.  It also allows canny players to make observations like these:

"Those orcs have guisames.  That means they're not the same tribe as the ones we're warring against.  Let's try to enlist them in our cause."

"Some of the skeletons were wielding bardiches.  That means this tomb must date back to the Torgonian Empire!"

"These ladies claim to be Amazonian Mercenaries, but they wield halberds.  I think they're really members of Lady Katarina's bandit gang."

"There's a broken lucern hammer by the dwarf corpse?  He must have been a kinsmen of mine.  No other dwarf clan uses that polearm."

It's been nearly four years since I was a player in a FLAILSNAILS game.  Below are my guy and his associates.  Tomorrow we'll see if any of them can survive Aleksandr Revzin's Stonehell campaign. 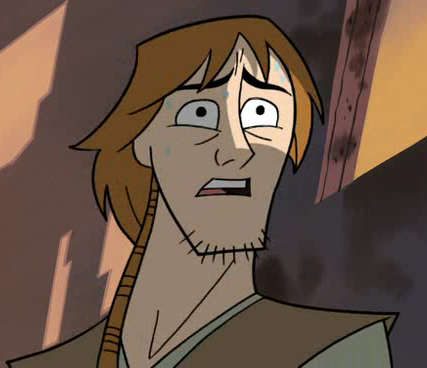 Donnal MacDonnal, a fighting man sometimes mistaken for a knight 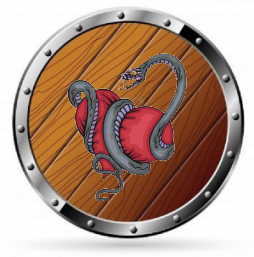 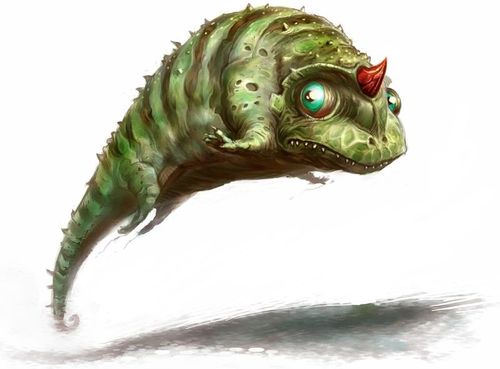 Elford, Donnal's magical pet lizard, which hovers constantly over his left shoulder and telepathically urges him to take greater and greater risks 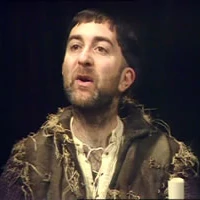 Two People Are Annoying Me Today

I'm grumpy today because I didn't get much sleep last night.  I was trying to edit a chapter of my dissertation and not a lot was happening in that regard.  So this post will probably come off as angrier than necessary.

Person #1: Michelle Malkin
By way of full disclosure, I can't think of a time I've heard an opinion of Ms. Malkin's that I agreed with, so when I heard she had a video about Dungeons & Dragons, I went in assuming I was going to disagree with it.  The video is only sorta about D&D.  It's mostly an excuse to attack academia.  The target is Antero Garcia's article "Privilege, Power, and Dungeons & Dragons: How Systems Shape Racial and Gender Identities in Tabletop Role-Playing Games."

There's no firm evidence in the video that Ms. Malkin bothered to read the actual article.  She cites the abstract, notes that she first heard of the piece from Breitbart, and shows a brief clip from a presentation where Garcia discusses part of his methodology.  Maybe she read it.  It's a short video, so maybe the part where she says something like "On page 243 he says..." ended up getting cut.  Harris Bomberguy's multiple takedowns of right-wing folks who don't do their homework has probably made me a little bit paranoid about such things.

But I definitely did read the whole article, even the boring parts.  Turns out this stuff is more than a little in my wheelhouse, disciplinary-wise.  Garcia uses cultural-historical activity theory, which I teach to undergrads, and systems theory, which I've used a tiny bit in my own work, as part of a larger cultural studies-based analysis of the D&D corebooks.  And he cites Huizinga's classic work Homo Ludens: A Study of the Play-Element in Culture, which I read as a good sign that he's taking the game studies end of the element seriously.  (Though I also think that Homo Ludens is a bit of a minefield.  It's sort of like Frasier's Golden Bough for games: the synthesis maybe goes too far in smashing disparate cultural elements together.)

Anyway, to someone who is both a D&D player of many years and a scholar of the right type, Garcia's article doesn't really say much new: Depictions of women in early D&D ranged from puerile fantasy to outright erasure.  D&D race (orc, elf, halfling, etc.) is problematic at times, and possibly congruent to problematic notions of real world race.  Oriental Adventures exoticizes Asia and Asians.  Garcia ends with a rather ham-handed attempt to link these observations to GamerGate.  Such an articulation is possible, I think.  The author just doesn't do a great job of connecting the dots.

There are a few other quibbles, but basically this is the exact sort of thing I normally wouldn't think to write because it all strikes me as so glaringly obvious.  Of course you're going to find traces of sexism and racism and orientalism in D&D.  Have you read the inspirational fiction?  Have you seen our culture at large?  The way I teach my students about this stuff is to make an analogy with environmental pollution: we all breathe it in whether we like it or not.  The real questions on the table are whether or not you are going to make efforts to not be an emitter and whether or not you are going to help clean up the sludge.

What Garcia doesn't do is end with something like "Therefore D&D is bad and you should feel bad for playing it."  Time and again, I have seen people on the right make this leap, to assume this sort of critique is an attack.  For some reason they seem to think that academics are coy about these things.  What they don't get is that this sort of criticism is almost always done by people who love the subject material.  I don't really like much of Wordsworth's work for various reasons.  But I love Lord Byron's poetry.  I am spending most of a chapter in my dissertation giving Lord Byron the business, because that is far more interesting to me than ragging on Wordsworth.

Similarly, the most cogent and biting critiques of race in comics I have heard came from my buddy D.C., who fucking loves comics.  My favorite rundown of everything fucked up about Star Wars came from my other buddy Thaddeus, who loves Star Wars.  And why do I discuss comics and Star Wars with these guys?  Because I fucking love that shit, too.  D&D has had some shit in it that is maybe fucked up in its treatment of women and minorities.  That's not an invitation to throw out the baby with the bath water!  I honestly don't understand this sort of assumption when I see it in action.  Everyone is allowed to enjoy fucked up things.  What you don't get to do is enjoy them without criticism.  Is that what Ms. Malkin wants?  To play D&D without having to think about it too hard?  I dunno.

So, to conclude: Ms. Malkin, if you are reading Garcia's fairly tame article as an attack, I suspect that says more about you than the article you may or may not have read. 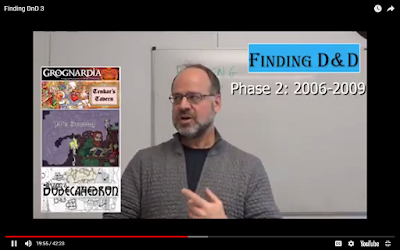 I got to hand it to this guy.  To make a 42 minute video with an extended argument drawing parallels between the OSR and fundamentalist Christianity takes something.  Endurance, at least.  In an era where some actual religious fundamentalists seem to be into things like blowing up other people, it also requires a fairly interesting sense of proportion.  Or maybe there's an OSR Jihadist dynamiting stores that carry hippie games and I don't know it.

The biggest thing that gets my goat about this video is that I gave Dr. Edwards 42 minutes of my time and he never strayed far from painting with broad brush strokes.  I'm left with the impression that he's done some research into the texts, plus read some blogs and forums.  But I can't tell from this video whether or not he's ever actually played in any Old School games.

His comments about "false compatibility" between OSR games and a taboo against critiquing the original texts, to give two examples, do not describe my experiences.  I run a FLAILSNAILS game where I often do not even know what rules half the party was made for, and it all seems to work out pretty well.  And I've written about four of my complaints with Moldvay Basic, without even getting into how dumb alignment languages are.  I'm pretty sure my BX vs LotFP series also notes places where I think Raggi improved on Moldvay's rules.

I found Edwards' lack of specifics especially frustrating, given that early on he claimed, as part of his extended religious metaphor, that "local practice is religion."  Edwards and I seem to agree that I am part of the OSR scene.  I'm not sure what to make of the fact that what he describes seem to have nothing to do with what is happening in my corner of the OSR.  Especially the part about caring a bunch about what Hasbro/WotC is doing.

My own relationship with mainstream D&D has evolved over the years and I will readily admit that 4e annoyed me.  About the last time I gave much serious thought about the latest edition was when I wrote my piece about how to adjudicate old school fireballs.  That was back in 2014.  You know what I've been doing since then?  My own thing.  As have a lot of people.  I honestly can't remember the last time Wizards/Hasbro came up in conversation during game time.  We'll pause to talk about the latest OSR thing of note, or to speculate on what a crazy bastard James Raggi is for his latest project, but 5e is hardly on the radar in my circles.

So I guess what I'm saying is that I reject your main premise, I doubt you have evidence to back it up, and my own experience seems to be counter-evidence.  Frankly, I think you can find a better (and less inflammatory) metaphor for what is happening in the OSR by looking at the evolution of pop art into folk art.  Take, for example, the rise of hip hop and the relative loss of status for heavy metal.  There's certainly got to be some "us versus the world" attitude in the heavy metal scene today, and perhaps some anger towards hip hop.  But to conclude that heavy metal is primarily about that reaction to hip hop oversimplifies a range of artistic practices.