Hi, all! Remember me? I gots a new game going. Two of the players are self-taught 4e enthusiasts, two have never played any sort of D&D, only one has any real idea what he might have gotten himself into.

Following a bit of mucking about generating characters, we open in a side street of Wintoncester, the August City. Six newly-arrived adventurers are bucking up their courage with the foul brew at the Wretched Crone Alehouse:

After a sufficient number of drinks to make going down into a dungeon seem sensible, the party 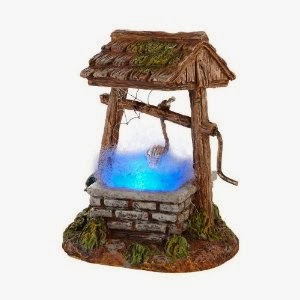 stumbles its way to a bustling courtyard between Shieldmaker Street and Tanner Street. In the center of this back-alley plaza is the Dolorous Well, known for the eerie moans that occasionally emanate from its depths.

After some debate, a clear course of action arises: send the NPC down first. Albert the Halfling climbs into the bucket and is lowered down to have a look-see. He reports to side passages in the wall of the well: a small one a fellow his size can crawl into and a large one that a human could stand in. After some urging he crawls into the smaller tunnel. There’s some screaming bloody murder and splashing sounds and eventually the bucket is pulled back up, but this time it contains both Albert and a giant rat locked in an earnest wrestling match! Guy the Cleric administers a sound drubbing to the rat, knocking it out of the bucket and back down into the water. Splash!

Getting down the other tunnel ends up being a logistical pain in the ass, involving figuring out who goes down next, who stays and turns the crank, who fends off the rest of the giant rats, and a side order of “oh who brought the torches? no one?” Albert volunteers to stay up top to “guard the well”.

But finally, our heroes can get Down to Business, negotiating series of chambers, tunnels and many, many staircases. The first room they find with anything of note is some sort of evil shrine. On one side of the room is an altar with a crude wooden statue of what I describe as a toad-like demon-Buddha. Opposite of it is a tapestry depicting the capture, butchering, cooking and serving of a unicorn, while high overhead a globe hangs pendant from the ceiling, flickering with an eerie green light that malevolent illuminates the chamber. Guy, like many others in the party, is disturbed by the scenes depicted on the tapestry. He opts to set it ablaze with one of the torches Istrazanne borrowed from a shieldsmith. 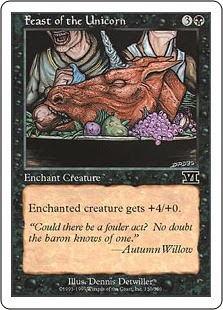 As the flaming tapestry falls to the floor, a rank of eight skeletons in bronze armor are revealed behind it. They spring to unlife and advance with ancient spears, but clerical turning puts the kibosh on their attack. Before they can be turned Simon of Sodor begins his session-long cold dice streak. IIRC he doesn’t land a single strike all night, much to everyone’s amusement.

Meanwhile, Rogan Rumrunner’s curiosity has gotten the best of him. He lobs his grappling hook up at the spooking glowing orb. He doesn’t catch his hook on the globe or the chain it hangs from, but he does crack the globe. A phosphorescent green gas seeps out and drifts down to the floor, into the vague outline of a humanoid form, with black holes of hate where his eyes should be. Rogan has released the dreaded Highly Visible Stalker from its prison.

I thought this encounter was going to be a Total Party Kill, which is always a pretty good way to start off a new campaign. The players did their best to make the fight entertaining. Rogan very nearly died, but Guy successfully revived him. Cornelia and Istrazanne entangled the creature in a rope in a very good attempt to make it easier to hit, but Simon couldn’t land a single blow nonetheless. Only a natural 20 from a torch-wielding Guy and blessed St. Hargrave’s critical chart save the day, as the Stalker burst aflame/apart with some Michael Bay level special effects.

The other big encounters included NOT activating the additional skeletons behind a second tapestry depicting the Queen of Babylon and her Seven Headed Dragon wrecking up some saints, a brief fight with a badass skeleton guarding a staircase, and Thaddeus befriending Edbert the Recently Divorced Bugbear. The party even went back to Edbert’s lair for wine and some bowls of rat stew, which afforded Rogan the opportunity to nick some enruned arrows. After the visit with Eddy the Bugbear, they head up some more stairs to find what the bugbear described as “goblins working on something for the goblin king.” We ran out of time at this point, so rather than subject six new players to the Triple Secret Random Dungeon Fate Chart of Very Probable Doom (which I forgot to bring anyway), I opted to end the session in room 3 of the dungeon.

As we broke for the night it seemed like everyone had a pretty good time. The 4e players noted that it was a very different experience than they expected, but didn’t seem put off by the lack of a tactical display. So we’ll try this again in two weeks for more fun and frolic. Thanks to everyone who gave the game a go and thanks to Katy for hosting.