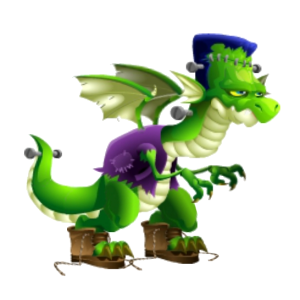 I'm sorry, but those shoes are absolutely ridiculous.  Even I can't justify such absurdities.

This would be a good project for someone who got around to more game conventions than I do.  Start with a large scrapbook/photo album.  Something like this one: 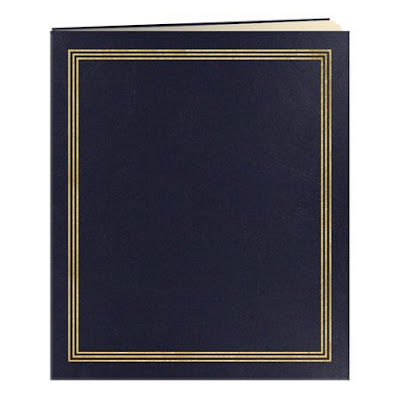 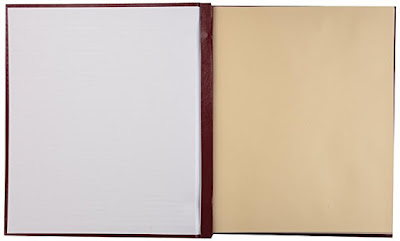 The insides are these sturdy, creamy beige pages.  I've used this exact type of album to teach undergrads about medieval manuscript practices.  We'd copy in bits of literature as if we were scribes, then annotate each others' work in the margins.  Those that got it thought it was kinda fun.  You can't tell from the pics above, but this album is pretty large. 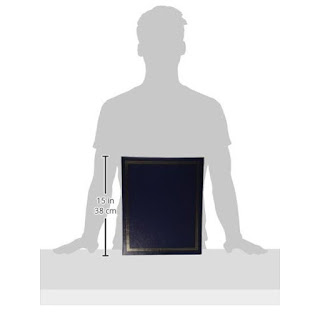 The next step would be to take two copies of your favorite old school product and destroy them by cutting them into individual sheets.  That's the crazy part.  With some rubber cement or similar adhesive, attach each page to a sheet in the album, in order.

Then take this monstrosity to conventions and gamestore events and invite people to annotate the text.  Maybe they want to clarify a rule or argue with the author or tell a brief story about their favorite monster or magic item.  Whatever they want to say, invite them to say it.  Maybe they see a comment from someone else and want to respond to that.

The result is that pages in the album would start looking like this: 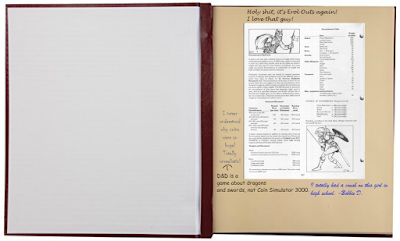 I think this would be a fun way to collect the opinions and experiences of a wide ranger of gamers.  It'd probably be a hassle to lug this big thing all over a larger convention, though.

In Doctor Who, they call this the Skasis Paradigm, the base code of the universe, and/or block-transfer computation.  Tolkien called it the Music of the Ainur.  On Synnibarr, it is referred to as Venderant Nalaberong.

The concept is simple.  Reality, at its most fundamental level, is not made of matter or energy, but rather consists of pure form, pure symbol.  If you can do the right math, sing the right song, or say the right words, you can alter the universe from the ground up.

Ordinary arcane magic doesn't work this way.  Typical arcane magic consists of figuring out how to jump in that one correct spot to leap out of the level proper and into the parts of the game you're not supposed to go.  The people who first figured out the rocket jump, the folks who use glitches to achieve speedrunning records?  Total run-of-the-mill magic-users.  The people who actually get into the code of the game and alter it are the ones using Venderant Nalaberong. 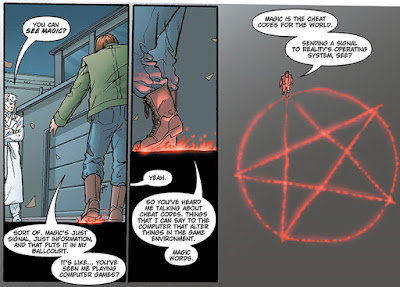 No one teaches Venderant Nalaberong.  You have to encounter it.  The first time an arcane caster comes across a scroll, spellbook, or other inscription written in Venderant Nalaberong, roll percentile dice.  If you get your Int score or less, the secret is revealed to you and you can employ any Venderant Nalaberong magic you find.  If you roll a 99 you go mad and if you roll 00 your head explodes.  Any other roll indicates that you don't get it and never will.

So why would you even want to risk it?  Three reasons:

Godpower is the power used by the gods.  Pretty simple, eh?  Whether the first god found or invented Godpower is a subject of great dispute among theologians.  What they all agree upon is the fact that divine magic as we know it is basically Godpower with all the safety filters turned on so as to not damage puny mortal casters.

Everytime a new level after the first is achieved by a cleric, paladin, or other divine caster (excepting druidic/shamanic sorts; on Synnibarr they use Earthpower), they may roll percentile dice to see if they get access to any undiluted Godpower.  If they roll their Wisdom or less, they gain d3 non-renewable points of Godpower.  On a 99, they have inadvertently cheesed off their patron deity and loss all divine powers until they atone.  On a 00 they have somehow lost access to pure Godpower forever, losing any accumulated points and their opportunity to roll for future Godpower points.  Gods are fickle sometimes.

To spend a Godpower point, Wisdom or less must be rolled on a d20.  A failure indicates the point is lost with no effect.  A natural 20 means that all accumulated Godpower points are unleashed in a blast of (un)holiness doing d20 damage per point to the caster and everyone in a 100' radius.

Spending one point of Godpower allows for the users choice of the following effects:


Spending two or more points of Godpower allows the user to negotiate a freeform miracle with the referee.  It cannot completely duplicate the form of a known spell, but it can achieve a similar effect.  For example, say the party once again cannot get the next door in the dungeon to open.  Spending two points of Godpower might allow the cleric to summon a bolt of holy lighting that shatters the door to pieces.  That's effectively a Knock spell, but with cooler window dressing, so it's okay.

Godpower probably only works on parallel universes where your particular god exists.

Found this quote while doing some research wholly unrelated to D&D type stuff:

The good craftsman seeks out the commonplace and tries to master it, knowing that originality comes of necessity and not of searching.

That's from Edward Johnston's book Writing and Illuminating and Lettering.  Johnston (pictured) is a founding figure in the revival of calligraphy as an art form at the end of the 19th century.

Johnston's remark strikes me as equally applicable to the craft of DMing.  You don't need to strive for a unique style or an individual approach since your own personal way of DMing will emerge spontaneously through an accumulation of seemingly insignificant decisions you make over the course of play.  This is why you don't need to start out with your own special take on, say, orcs.  Twenty sessions into an orc-heavy campaign and you'll have your own local version of orcs pretty much whether you like it or not.

I've seen similar advice offered to illustrators working in comic books.  Don't worry about your unique style at first; do enough drawings and it will appear.