The Dumbest Sword Ever

So yesterday's expedition included the party raiding the tomb of the Elf Prince, the son of the current campaign villain.  They avoided the poison gas trap and laid their grubby little hands on some sweet loot, including the dumbest magic sword I've ever seen. 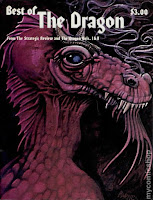 I gave this sword the name and put it in my dungeon, but the idea of a sword that's +5 versus all these different weirdos belongs to a cat named Charles Preston Goforth, Jr.   His article "Wizard Research Rules" appeared in issue #5 of The Dragon, but I encountered it in Best of The Dragon, still one of my favorite D&D books.  I was a dumb kid when I first got this book back in '81 or '82 and it took me decades to figure out some of the stuff in it, because the articles it collected were written for adults playing OD&D.  So as a Moldvay Basic twerp I lacked the context to understand much of the discourse happening in the text.

But the over-the-top magic weapon chart in Goforth's article was one of things I could definitely relate to.  Most of the items on the chart made sense to me: vorpal, flame tongue, disruption, +3 vs trolls, etc.  The entry +1, +5 vs. Druids, Monks, Psychics, Healers, Samurai, Idiots, and Jesters sticks out like a sore thumb.  Back then I didn't understand what this hodgepodge of possible foes could possibly have in common.  Why the heck would one even want a sword +5 versus Idiots?!?  It took me a good long time to come to the realization that what this item represents is a commentary from Goforth on the proliferation of new character classes.  And this was all the way back in 1977.  Think about that for a moment.  Those old schoolers who complain about dragonborn and warlocks?  They come from a long tradition of such nonsense.

So if you're a FLAILSNAILS DM and Blair Fitzpatrick's character Colonel Kaffshyth wrecks your favorite Druid or Samurai, you can blame Charles Preston Goforth, Jr. just a little for creating the sword and me a lot for putting the dumb thing in a dungeon.

(Still haven't seen the rules for the Idiot class, though.)