Some of you already know of my appreciation for gaming art from my Erol Otus Shrine (which desperately needs an update). Now that I've finally blogged about Encounter Critical, I can pay proper homage to another truly great artist: David R. Deitrick. Mind you, Deitrick had absolutely nothing to do with the amateur line drawings that disfigure EC. Some of you may recall a couple months ago when, apropos of nothing, I devoted a gameblog post to several graphics of that bounty hunter robot known as IG-88. What I didn't say back then was that the whole point of the post was to provide reference drawings for Mr. Deitrick to produce this for me: 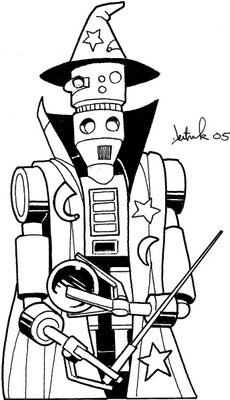 That's a David Deitrick character portrait of one of the PCs for my upcoming Encounter Critical convention game. I call him IG-666, and he is a Robot Warlock. Ain't he awesome?

You see, I happen to be on friendly terms with Mr. Deitrick's son. You may know him by his RPGnet name, Random Goblin. The Goblin and I seem to have pretty similar gaming tastes, and given the material he puts on his blog, The Goblin's Lair, we're pretty much on the same page politically as well. I find the latter fascinating because RG, like his father before him, is a military man. The usual perception these days is that serious soldiers vote Republican but from time to time I find people like the Goblin who don't fit this mold. When I solicited the talented folks of RPGnet looking for a photoshop of IG-88 in pointy hat, RG suggested that maybe his dad could draw one up for me. That was awfully nice of both Mr. Goblin and his illustrious father.

Anyway, enough name-dropping and personal yackety-shmackety. Back to David Deitrick and his excellent art. For those of you who weren't gaming in the eighties the importance of Deitrick's work can hardly be overstated. I don't think it's exaggerating to say that he single-handedly defined the look of 80's sci-fi gaming. His paintings graced the cover of many products from the key sci-fi lines of the era: Star Trek (the FASA version), Doctor Who (also the FASA version), and Starter Traveller. I'm hard pressed at this moment to recall a Deitrick cover for any BattleTech products of the era, but his interior illos included some aerospacecraft in the original BattleTech Technical Readout and many of the fabulous color plates inside Mechwarrior.

In sci-fi gaming it's always easy to depict bug-eyed monsters or cool spaceships or flashy equipment, but Deitrick always did an excellent job of keeping the human element front and center. For the Starter Traveller line and Mechwarrior this was an especially important task, because before his work appeared original Traveller and BattleTech were largely faceless, with concentration on the machines (starships and giant robots respectively). Consider here how Deitrick integrates a cool uniform, an attractive woman, and a sci-fi gun. With a spaceship thrown in the background for good measure. 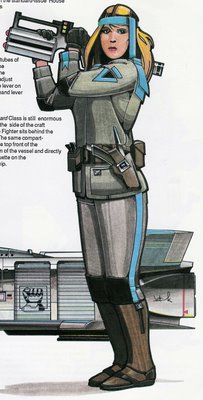 Original Traveller, you may recall, had no art on the cover of the original books, just a single stripe of color on a black background. Those Little Black Books still look pretty slick to me, but when GDW rolled out Starter Traveller to attempt to capture some of the D&D Basic money they decided to go with some killer art on the cover. Deitrick was responsible for the cover art on the Starter boxed set and many other Starter Traveller products. I'm fond of his art on the cover of Alien Module 2: K'Kree, even though Mr. Deitrick names it as one of his least favorite in a 1987 interview with Stardate magazine (volume 3, number 6). Rather than display a cover the artist doesn't like, here's another one of his Trav pieces that I enjoy: 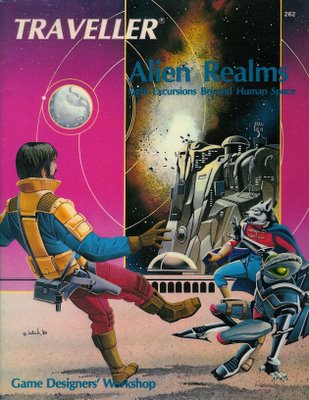 Again you can see how Deitrick includes all the necessary stuff for a product like Alien Realms. There are aliens in the picture. You can tell from the gun and space city that it's a sci-fi product. But ultimately a human story is being told here and that's one of the reasons I think Deitrick's work is so special. He's got a storyteller's and gamemaster's approach to his work. Here's how he put it in the '87 interview:

Every one of my paintings usually has a story behind it, too -- I'm talking about my non-pay stuff...
I've got one painting in particular that shows an Indian look, a very native American-looking guy with a real light rifle and a motorized hang glider over the top. And yeah, it's fun, it's got a nice feel, but what people don't realize is that character is out of an alternate universe that I've thought up all by myself. I'm a real big alternate-history nut.

(Incidentally, what's up with the color selected for the title? Even with the actual book in hand it's only vaguely legible.)

Two other signature Deitrick effects are on display here. Like my man Otus he's not afraid to use purples and violets. And Deitrick often incorporates abstract elements into his pieces. As a lad I did not appreciate Mr. Deitrick's use of the abstract. I think I was overly influenced by the school of thinking that gaming art should be photorealistic depiction of fictional events. As I've matured more fanciful artists like Otus and Deitrick have grown more and more fascinating to me while the Elmores et al. of the world grow more tiresome. Below is the Deitrick cover of a book I purchased when it was first published in '87. Back then I just didn't get it but today I consider it much cooler than a standard photorealistic approach. 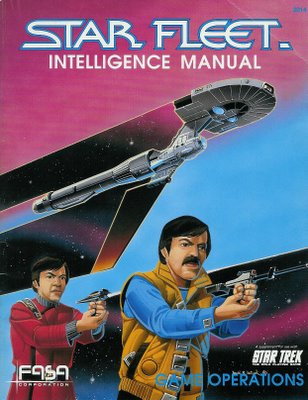 I think the three pieces above give you a pretty good idea of how Deitrick operated in the 80's, but there's a lot of other good art of his out there. You can see some of it by following the links on his credits over at the Pen & Paper database. For more recent Deitrick work check out David R. Deitrick Design, his official web presence.

One other thing I ought to note about Mr. Deitrick's work is his treatment of women. He does great work with the female form but every such piece I've seen avoids the pitfall of unnecessary titillation. My favorite black and white Deitrick piece is a good example:

Like the Mechwarrior art above the subject is dressed appropriately for the milieu. And neither the pose nor the proportions show the prurience so prevalent in gaming art. Not that I'm against gratuitous displays of female anatomy, it's just that Deitrick impresses me with the way he can depict a beautiful woman in a classy and respectful manner. Even the color plate in Mechwarrior depicting a female mech pilot in her rather scanty cooling vest and panties ensemble avoids the usual traps accompanying such subject matter: the pose and facial expression are that of a woman in her work clothes taking a coffee break. Given the rest of the field of women in gaming art, that's an interesting artistic decision.