As a kid I was never really a miniatures guy, and my friends and I all went BattleTech crazy about the same time we got part-time jobs in high school, so I never really owned much from Citadel.  I eventually owned lots of 1:285 robots from Ral Partha, but precious few fantasy figures.

But I loved seeing Citadel's ads in Dragon.  They just oozed style.  Check out this bad boy from 1987 (it's actually the White Dwarf version, but the same basic ad ran in America as well):

I wish I had a larger scan of this thing handy, because it's hardy to see all the great details and to read the individual names.  While most minis makers were trying to sell you "Orc Infantry" or "Orc Advancing with Spear," Citadel presented each orc as an individual character with a unique name.

The Citadel folks did this with lots of other lines--like fighters and halflings and whatnot--but I really want to talk about these orcs because they figure into an experiment I did almost 30 years ago that I never sufficiently followed up on.  I was running a game for a whole new group, a one-off with people who were curious what all the fuss over D&D was about.  So I decided that the scenario would be that the two dozen orcs pictured above were a raiding party that had recently moved into the local area and the PCs were supposed to drive them off.

Those 24 orcs were literally the only monsters used in the scenario.  I had a map of the small cave complex (maybe 6 or 8 chambers total) that they were using as a staging area.  I whipped up some rules for how many orcs would be in which chambers at any given time and how many would be out pillaging.  And I made a list of 24 orcs.  Each one had an individual name, a hit point total, individual weapons and armor, and a line or two of description and/or personality.

All these guys were pretty much normal 1 hit die orcs.  The warrior orcs had no more than 6 hit points each, while the champions had at least 5.  Depending on the equipment depicted on the figure, some had worse ACs than a typical orc, because some of those guys above seem to be wearing clothes rather than armor.  The two shaman-looking figures among the champions were issued a single spell (cause fear for one and magic missile for the other, IIRC) that they could cast twice a day.  And I am 100% convinced to this day that the bottom right orc champion (Hakblod Stunty-Slicer) is holding a Mad Max style razor boomerang, so I made up stats for such a thing.  Other than those exceptions, these baddies were perfectly normal orcs.

I thought it worked really well.  Whenever the party encountered a batch of orcs I could say "5 more green-skinned goons round the corner" but once battle was joined or if the PCs had time to observe them, things like this could happen:


DM: The one coming at you has a big meat-cleaverish sword and a spiked helmet.
Player: Spiked helmet?  Like Colonel Klink has on his desk in Hogan's Heroes?
DM: Sorta, yeah.
Player: Fuck that guy!  I aim my spear right between his Nazi eyes!

DM: One of the bigger, armored orcs stops about 10 feet in front of your elf.  He holds his curvy sword and shield to the sky and proclaims "I am Mandig Elf-Sickle!  Today your ears will be added to my trophy collection!"
Player: I hide behind the barbarian!

My notes for these 24 orcs amounted to one or two pages but it added so much to what could have otherwise been a by-the-numbers orc slaughter.  And here's the sneaky part about the whole thing: I never showed the ad to my players or acknowledged its existence.  As far as they knew, I had customized these badguys all on my own.

UPDATE:  Ryan Clifford sent me a larger version of the picture.  Thanks, dude! 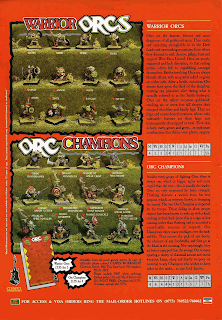 Broodmother Skyfortress invades the US!

After an unusually long transatlantic transit time, Noble Knight games finally has Broodmother Skyfortress in stock (though they got the name slightly wrong)!  If you've been avoiding buying it because you didn't want to deal with international shipping or you're allergic to transactions in Euros, now is the time to get yourself a copy!

What People Are Saying About Broodmother Skyfortress:

"For any D&D-like system, I think this is a far better introduction to the game than the Lost Mines of Phandelver." --redditor 3d6skills

"It might be the best primer thus far on running things by the seat of your pants in an OSR manner" --Bryce Lynch of tenfootpole.org

"I really like Jeff's approach to Broodmother SkyFortress - tight enough that the storyline is easy to follow, loose enough that you can flex it to the needs of your players / campaign world. That is always a trick, as most adventures are written for a certain campaign world and setting, even if that is never actually said in the adventure."     --Erik Tenkar of Tenkar's Tavern

"It's literally snap (Jeffs Gygaxian & Marvelesque tone), Crackle (the Kirby borders and thrillin' heroism) and pop (the direct incorporation of the pop-cultural elements in both content and narrative voice and the vibrant splash pages)." --Patrick Stuart at his blog False Machine

"(1) Broodmother Skyfortress is very awesome; (2) Your game will certainly improve if you use Rient's advice; (3) if we are making comparisons here, buying other adventures opens the door to the very real possibility of being disappointed – it is that good. This is probably my first review where I don't have any critiques." --Corey Walden at the Fiendish Almanack

"This is awesome! Broodmother Skyfortess is a gonzo take on the famous flying castle with giants trope. By gonzo I mean nonsensical although in a very consistent fashion (if this make sense at all). Broodmother Skyfortess not only delivers on its absurd premise but pumps it over 9000! And it does that supported in two fronts: really GM-friendly content and art/layout." --Tower of the Lonely GM

"BMSF is a module that was worth waiting for. For your money you get a kickass adventure, and some of the best advice the OSR ever provided." --Vorpal Mace

"Reading this will make you think about wrecking your campaign. I'm not sure it's a good thing, but I'll probably do it to mine." --Eric Nieudan on Google Plus

"I have never waited excitedly for an RPG product to come out ever. I just am not that kinda guy. But this--this I've been waiting for. I read and ran an early draft and it became major canon in my game because it involved a flying island crashing into a city--and it's a goddamn introductory module. It's fantastic, it's written in a breezy, eminently readable style by the smartest, funnest DM in all of gaming, it's several times longer than it was supposed to be and has crazy 4-color art and raises the module bar sooooo many notches and is exactly what the whole DIY D&D thing is supposed to be all about and I'm so happy I could kill all of you." --Zak Smith

"Broodmother Skyfortress is chock full of great content. Not only do you get all the gonzo content that will take your party to a floating fortress filled with the craziest creatures in the known multiverse, but you also get a ton of stuff that you can use for your existing or new campaigns! To top it all off, you get all of this in a beautiful package full of great art. You can't go wrong if you like over the top, mutated giantish things wrecking your world. Highly recommended!" --anonymous RPGNow review [Not me OR my mom. She bought a print copy.]

"An absurd amount of content for the price. And it's all good! It's all very useable! Great writing, too. A lot to unpack. Recommended." --review by RPGNow customer SeanP

"BMSF is also kind of weird, but the weirdness has a goofier tone that is more fun and thus easier to get to the table. It has an over-the-top tone that careens easily between desperation and high heroism. It would make a good DCC conversion as well. The bonus content is also fantastic. Highly recommended!" --KevinH on a thread at rpggeek.com

"Taken together the book is probably one of the best getting started guides to running games. (Certainly for running games in an “old-school” style.) Jeff said he took inspiration here from the old basic modules In Search of the Unknown (B1) and Keep on the Borderlands (B2). This module does a far better job than both at teaching a DM how to run a game. It’s advice is far more clear and direct." --Review by Ramanan Sivaranjan of Save vs. Total Party Kill

"Just finished reading Broodmother Skyfortress for Lamentations of the Flame Princess. It's an excellent book for those interested in OSR games, being part adventure, part high quality GMing advice from Jeff Rients." --Frederick Foulds on Google Plus

"Really, this is a book that any rpg designer should read. We need more books like this." --NicholasJ on Google Plus

"I REALLY like +Jeff Rients​’ intro material to Broodmother. Top notch instructional material on how to use a game thing." --Victor Garrison (headspice) in a thread on G+ 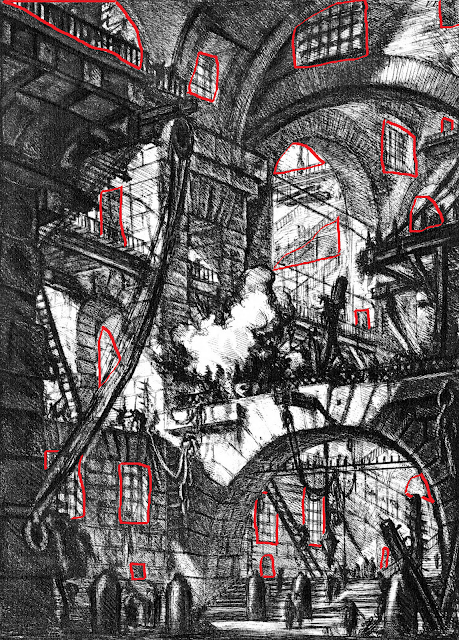 I am slightly obsessed with 18th century artist Giovanni Piranesi's collection Carceri d'invenzione ("Imaginary Prisons").  Piranesi draws vast, gothic 3-dimensional structures that I would love to implement in my dungeons.  So I figured I'd try imagining a scenario where I'd use Piranesi directly as a handout.  The idea is that the dungeon would use one or more of the Carceri as the key branching point of the dungeon, the way the box canyon in Keep on the Borderlands allows one to access any of the various Caves of Chaos.

In other words, give the players this picture (minus the red) and ask them where they want to go. 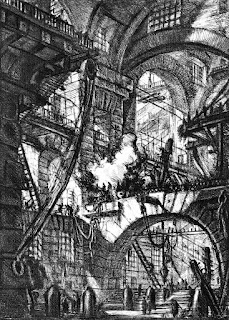