Not for the Phraint of heart

I know Arduin, Bloody Arduin has full rules for PC Phraints, those delightful pre-Vrusk, pre-Thri-Kreen insect dudes from the mind of Dave Hargrave.  But I don't own that book and I wanted to make up my own race-as-class version anyway.  So click the link here for my draft rules for bug dude PCs: BX Phraints 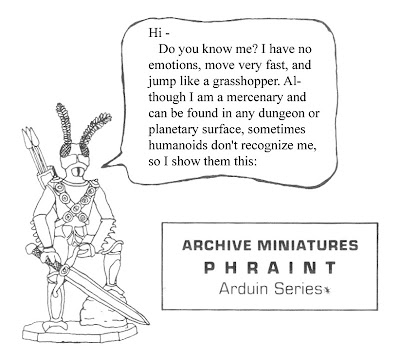 So I'm over at the library, pawing the maps and atlases of the U.K. and Ireland and such.  I found a map you might like in The Reader's Digest Complete Atlas of the British Islands.  Dig the complete title from the title page: 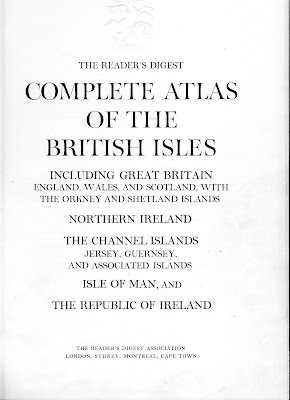 Dang.  Even the shrimpy little Channel Islands get billing over Ireland.  That's some stone cold partisanship right there.  Anyway, dig this little inset map I found on page 83. 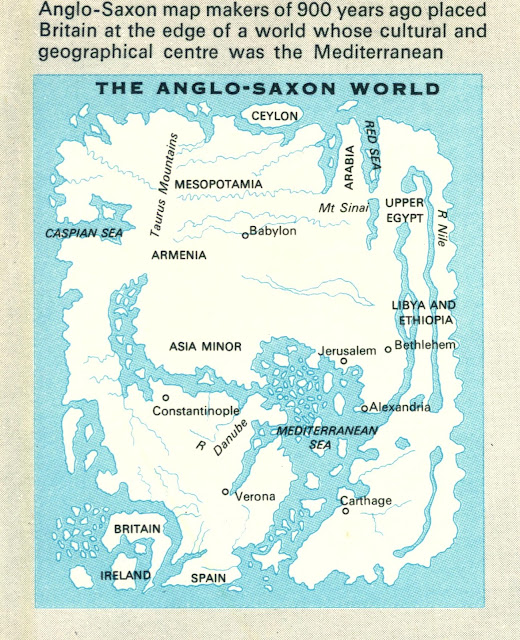 That map is extra crazy if you don't know that old maps are (literally) oriented with east up top instead of north.  Of course, for your campaign you could ignore that fact and place Ceylon at the North Pole.

I think my favorite feature of this map is that the Tigris and Euphrates don't seem to empty into anything in particular.

The Land of the Brutality is nice this time of year.

Anybody ever set a campaign on an album cover?  I found this little slice of joy while doing a google image search for Asgard Miniatures. 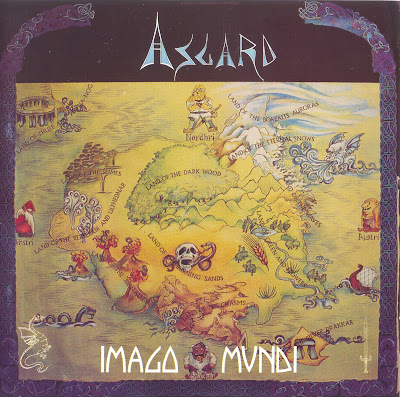 You can listen to one of the tracks here.  Warning: prog rock ahead. 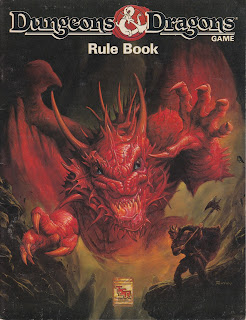 So about a week ago I got over to Gryfalia's Aerie, the local game store with the overwrought name.  Most of the shop is dedicated to collectible style games and boardgames.  I saw two boardgames that have interested me, Battlestations and Super Dungeon Explore, but it's a rare day when I'm willing to plonk down sixty-five or one hundred bucks for a game.  They've got a nice little used section in the back room where I found just the rulebook for the 1991 D&D big Black Box set, the earliest version to try to turn D&D into a more boardgamey experience.  I played a bit of this version back in the early nineties, but I wasn't the DM and never saw the rules.

Because it was a component to a larger game, the guy behind the counter was baffled how to accurately price this booklet.  He spent nearly five minutes fiddling around on his computer, then let me have the book for free.  I'm still baffled about this decision.  I wanted to say "Hey, man, don't be so dependent on your magic glowy box!  Just spitball a number and we can discuss it!" but self-interest overrode my fear of robot overlords, so I left with a free game book.

So what we have here is a 64 page soft cover credited to Timothy B. Brown with art by Terry Dykstra (cover by Jeff Easley).  I honestly don't know who Timothy B. Brown is.  I've seen Dykstra's work in other TSR stuff of the same period.  Did he do some of the illos for 2nd edition AD&D?  More on the art in a bit.

Overall, the rules cleave pretty closely to the designs laid down by  Moldvay/Cook/Marsh in 1981.  Alignment is threefold, elf is a class, no cleric spells until second level, etc.  Here are the differences I've been able to suss out after several page-throughs:


All in all, I'd call it a perfectly functional version of the game.  Most of the changes are for the better.  Note that some of the post-Basic stuff is squeezed into this 64 page booklet by virtue of the fact that it is a rule reference primarily and not a teaching tool.  A set of cards that also come in the big black box explain how to get started with the game.  Without those, this would be a harder set to use to learn how to play D&D.  But as a rulebook for an experienced DM who prefers lower level games, Brown's version of Basic would be about perfect.

Let's look at some of the interior illos.  Instead of that fantastic mix of illos from Otus, Roslof, Willingham, Dee and LaForce, all the interior art is by Terry Dykstra.  Dykstra seems technically proficient, but more prosaic than his predecessors, perhaps akin to Jim Holloway but without the sense of humor. 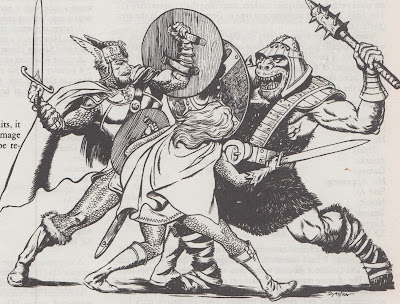 Here we have the fighter and the elf from the chargen section fighting some humanoid dude.  I think it's supposed to be a hobgoblin, because this pic is in the monster section on the page opposite from its entry.  But this illo is right next to the lizard man write-up, so a newbie could be confused.  This is something the design team behind the '81 rules did right; you could usually tell from the context what illo went with what monster.

This is the MU and cleric from the chargen section.  I love illos of adventurers puzzling over maps.  It's one of the few in-game activities that the people playing the game do at the same time as their PCs. 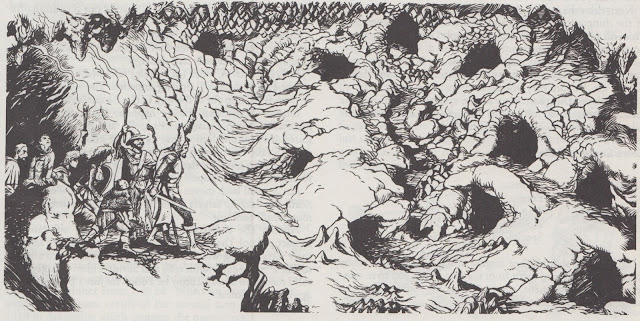 "You stumble into a spacious chamber with at least ten exits."  The DM is a jerk.  Note the three torches.  Good dungeoneering illos should not assume ambient lighting.

I hate to end an otherwise positive review with a downbeat note, but I pretty much loathe the cover art. There's a dragon but not much in the way of a dungeon (compare to the cool background used on the Otus cover art).  The dragon looks way too humanoid (hand-like claws, arms attach at the shoulder like a person rather than a quadruped, snout too short or the perspective is screwed up on the face).  But the worst offense is the single protagonist fighting the dragon.  D&D is a group endeavor.  Putting one guy facing a dragon on the cover is selling the wrong experience.

Cover aside, Brown Basic totally works as a serious choice for a rules reference for DMs who prefer low level games or who want to reserve 6th level and above for something different than the standard (A)D&D approaches.

Most D&D characters are disposable.  They start out life as six throws of 3d6 and then die in the first encounter of their miserable lives.  I've got a buddy whose original group interpreted the term "name level" to mean that your PC doesn't need a personal name until they're a full-ranked Wizard, Lord, etc.  The last time I ran a campaign set in Mystara one player went through so many PCs that he started numbering replacements.  He went through several incarnations of a few different names.  The first couple were fairly ordinary monikers but I think 'Niantic Sphinctre' went into the teens.  If the sample page of the DM Adventure Log can be believed, Dave Cook went through quite a few dwarves named Fred.  (Click to embiggen.) 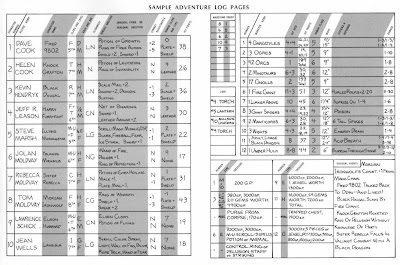 Given that we strew the dungeons of our campaigns will piles of corpses, it's unsurprising that we treat death so cavalierly.  I mean, check out this passage:

DM: "Black Dougal, you find out that you missed a tiny discolored needle in the latch.  Roll saving throw vs. Poison, please!"
Dougal (rolling): "Missed it!"
DM: "Black Dougal gasps 'Poison!' and falls to the floor.  He looks dead."
Fredrik: "I'm grabbing his pack to carry treasure in."

That's from page B59 of Tom Moldvay's 1981 Basic rules.  Stone cold.  They don't even check to see if he is actually dead before they start vulturing his stuff.  This is the rpg I started with, this is how I was taught dying worked in D&D.  No wonder I've got the blood of so many PCs on my dice-throwing hands.

But there's a couple of other things going on here.  One is the DM (and therefore Moldvay) undermining player agency by stealing Black Dougal's last words.  What if Kevin Hendryx wanted to say something else? I think PC death would matter a lot more if we made an effort to have some decent final words ready for our death.  I've often thought that Khan's/Ahab's curse would be useful to quote if your death was the fault of another PC. 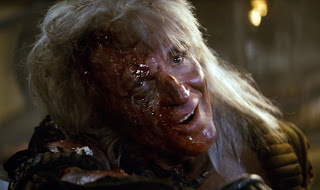 "From hell's heart I stab at thee; for hate's sake I spit my last breath at thee."

But for general purpose death scenes I'd recommend keeping this formulation in your back pocket: 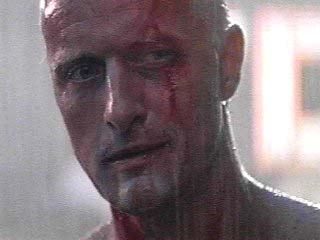 "I've seen things you people wouldn't believe. Attack ships on fire off the shoulder of Orion. I watched c-beams glitter in the dark near the Tannhäuser Gate. All those moments will be lost in time, like tears in rain. Time to die."

Obviously you'd want to swap out some awesome things your PC has seen.  This one works best in a FLAILSNAILS environment where you're probably adventuring with people who haven't seen the same exact horrors you have, which is why I have a version of it saved on my PC's charsheet, ready to go.

Of course, you can come up with your own final words, or steal them from some other source.  The important part is that we should put a little forethought into this, especially for beloved characters.  And DMs, give those players a chance to say something before they shuffle off this mortal coil.  You know, unless their death is particularly quick and/or grisly.  A smoldering skeleton probably won't have much to save. 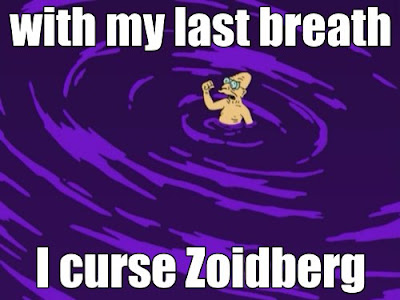 These last words are appropriate under any circumstances.