I've never been good at keeping track of time in the game.  I rarely remember to let torches go out, for example.  By Uncle Gary's standards ("YOU CAN NOT HAVE A MEANINGFUL CAMPAIGN IF STRICT TIME RECORDS ARE NOT KEPT.") I kinda suck at this part of DMing, which is why I've never had any decent astrological events impacting a game.

So here's how to make some astrology happen in your game.  First get some dice.  You want one of each size (one d4, one d6, etc.).  Break out you ugliest, most colorful dice.  The speckled ones.  The marbled stuff.  Just make sure that no two dice are of the same color scheme.  Just trust me for the moment.  I'll explain soon why you need these dice.

Okay, that's too many dice.  Six dice is all you really need.  I'll cut the white percentiles, the yellow d24, and the orange d4.

So here's the deal.  The six dice you've got now?  Those are the planets visible in the sky of your campaign world (or alternatively, the moons that orbit the gas giant your campaign world also circles).  The die size is the relative size of the orbit (bigger dice are further from their star), while the color scheme is what the planet looks like up close.  I'd suggest naming these planet in a way that helps your remember which die to use.  Thirty-sider=Thea, Icosahedron=Iggwilv, Twelve-sider=Tweenus, etc.

At the start of a session, at the beginning of the adventure, after a week has passed in game play, or whenever you feel like consulting the omens, roll all them dices. 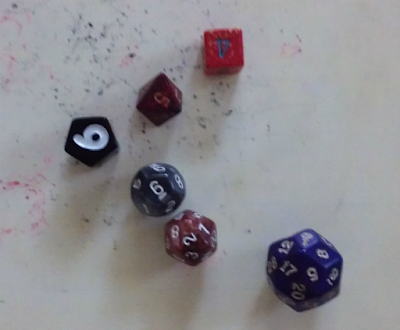 So you see the seven-sider and the d12 have both come up as 6?  That's a conjunction.  That's what you're looking for.  A conjunction indicates something is up with the universe that will impact the PCs' insignificant little lives.  You'll need to write a minor mechanical effect for each conjunction.  In an ideal world, it would be a die table for each one, but by my count 6 planet dice means 15 possible conjunction, that is, 15 different effects (or 15 die tables).  Here are a few dumb ideas for effects.

If three or more dice come up on the same number, then you have a multiple conjunction and all the relevant bonuses above apply at the same time.  If a week passes during play, roll all the dice again to find the new arrangement of the planets.

What if people want to game the system?  That's what astrologers are for!  For a fee (100gp, at least), they will be able to tell a querent when the next favorable conjunction will be.  If they just want a conjunction of some sort, it will be d6 weeks away.  If the party is looking for a specific effect, roll d20 for the number of weeks from now and charge 'em double for the extra work.  If the greedy bastards want a triple conjunction, add d100 to the d20 roll and charge triple.

A proper astrology system would also have bad omens that hinder the party.  Frankly, I don't want to keep track of that stuff.  Making all the possibilities into bonuses for the PCs means the players can do all the remembering.  If they forget their little bonus, that's their problemo.  And it gives me yet another excuse to be harder on the poor buggers, as they are getting bonuses the bad guys aren't.

What does this monster know?

Here's a go at something I've wrestled with forever.

The party may be searching for something specific.  If it is on the chart and either above and/or to the left of the chart, the informant can help, but with a chance of misinformation equal to 1 in 20 for each step away from the result.  Double the chance if the informant is Stupid.

If misinformation occurs, treat result as if the original roll had been 2 or less.

Example: The PCs meet a sphinx and obtain a Friendly reaction roll.  The net roll for Dungeon Knowledge is a 12, so the sphinx could lead her new friends to the nearest unguarded treasure.  However, the party is desperate to exit the dungeon, so they specifically ask her about stairs or other conveyances up.  "Nearest stairs, etc." is 3 up and 1 to the left from the indicated result, so the chance of misinformation is 4 in 20.  Of course, since this is a sphinx, misinformation is probably the result of her talking in riddles.

Q: Why doesn't the average monster know as much about their immediate environ as most people know about their neighborhood?
A: Because this is a game and letting one dumb kobold ruin all the surprises in the level is no fun.