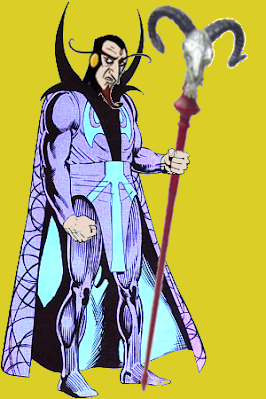 On a scale of one to ten, how big of a jerk is this sorcerer, in your opinion?

So yesterday was my first real day off since the Fall semester began and I decided to spend some of it playing some solo adventures.

The first adventure was "Eye of the Dragon," the solo adventure found in Ian Livingstone's Dicing with Dragons. This book is an introduction to roleplaying and buyer's guide from the 1980's. The solo adventure uses a system I've not encountered elsewhere, but I've never played a lot of solos RPGs. I tried this adventure once in the late 80's and got killed by an orc or something like that.

This time I rolled well on the three 3d6 throws for character generation. Dubbing my new PC Hawkins the Bold, I fought and defeated giant rats, an orc, a goblin, and a vampiress. I won and lost several cool treasures, only to ultimately succumb to poisonous gas.

The Solo Dungeon by Richard A. Bartle dates from 1978. You can bring up to six newly created D&D characters on this adventure. It doesn't specify if it was designed for OD&D, Holmes Basic D&D, or then-new AD&D. I decided to make a half dozen OD&D characters, using just the first three books. Here was my party:

Both fighters were slain by wights (yikes!). Umberto was eliminated by a trap. Egelar touched a magic sword of opposite alignment and dropped dead. My biggest victory was when Mortimer charmed a Theurgist, who later slept an ogre. After the adventure Mortimer and Dimwald ditched the Theurgist (who I named Theobald) and then parted ways, as lawful Dimwald couldn't brook neutral Mortimer's cutthroat shenanigans. Still, both came out of the dungeon alive, with a few hundred GP, some nice XP, and a magic-item each. I may take one or both to Dragon's Hall, a D&D solo module from Judge's Guild.
By the way, you can try this adventure for yourself, as the author hosts scans of all the pages online. 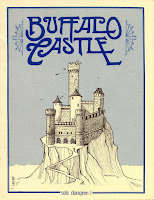 My last solo adventure was for Tunnels & Trolls, well known for its solo suitability and large range of solo adventures. I used the 5th edition rules to make a dwarf fghter named Doin the Unlikeable. Armed with a bigass flail and a sturdy shield, Doin set off for legendary Buffalo Castle, the first T&T solo adventure. Thanks to my low charisma, I ended up annoying an orc and we had to fight to the death. Doin went berserk (one of the more interesting T&T rules is that anyone with an Int less than 16 can go berserk in combat) and beat the orc into a fine red paste. This led to enough treasure that I wanted to escape to buy some dang armor before trying any more adventures. But a giant jellyfish blocked the castle exit. Thanks to multiple rounds of berserking earlier, Doin was too weak to effectively wield his flail. So he had to crush the jellyfish with his crowbar, which he could barely lift. That was rad. I never saw anything like that in a D&D game.
Happy Holidays, Peace on Earth, and a Morphistic Quiznox to Our Allies on Rigel 7.

It's the Joe Fighter Cinematic Universe 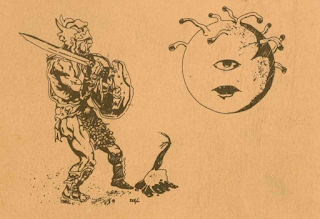 Remember this guy from the cover of OD&D Supplement I: Greyhawk? Well, I guess he survived this encounter with a beholder, as it looks like he later fights a dragon in the pages of the original edition of Advanced Melee for The Fantasy Trip. 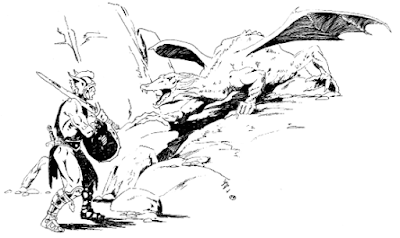 I assume he has his dragon-killin' sword out, which he brought special for this fight, and his regular day-to-day killing sword is the extra one at his side.

absolutely no one needs this

For each level past one, the character gets a bonus number equal to their level which can be spent on any one of the following:
When halving for purposes above, any fractional points are lost. Additionally, each level up must be spent individually, e.g. a third level PC must first spend 2 points and then 3 points.

*Gary Gygax once brought his PC Mordenkainen to visit Arneson's game for an expedition to the legendary City of the Gods. Dave saw the vast number of magic items on Gary's charsheet and was underwhelmed. He immediately ruled that Gary could bring any three of them and a potion of extra healing. A recounting of these events used to be on the intarwebs somewhere but at the moment I can't find the dang thing.