The Best Box of Monsters

So here's something cool I dug up a while back and meant to share with all y'all.

Back in 1982 or so tabletop fantasy gaming was so big that Grenadier Miniatures, one of the best manufacturers back in the day, started a division aimed at a more mainstream audience.  I don't think Pinnacle Products was around for long, but they did manage to release a pair of Dark Crystal figure sets and 2 Masters of the Universe boxes.  That's right, back in the day you could get Skeletor and the skeksis in 25mm.  What a time to be alive.  (Skeletor and the Skeksis would be a pretty decent band name.)

Anyway, one of Pinnacle's releases was, in my humble opinion, the single greatest boxed set of monsters in the history of the hobby.  Their humbly named Fantasy Monsters set contained eleven pieces.  One of them is one of the best sculpts of a smallish, wingless dragons I have ever seen:

But what really makes Pinnacle's Fantasy Monsters stand out for me is that the other ten figures were bat-shit crazy-go-nuts.  Dig 'em:


Is it just me or does Ram Horn look a bit like a squished version of the monster from the second Conan flick? The face is also a little reminiscent of the Phantom Stalker in the D&D cartoon, I think.

Of all the figures in the set, this one is the hardest one for me to get excited about.  In the few photos I've been able to find online, it doesn't really look like anything in particular.

Trust me, you'll want to click to see these bad boys close up.  Don't miss the One-Eyed Pit Fiend's troubling toes or the fact that those aren't crab claws on the Tri-Ora.  They're mouths.

I saved the Six Legged Nightmare for last because that paint job is by the one and only Erol Otus.  That shading from peachy pink to brownish purple is vintage Otus.

I can't find a scan of the cover of the boxed set online, but here's the front of the painting guide that included with the figs. 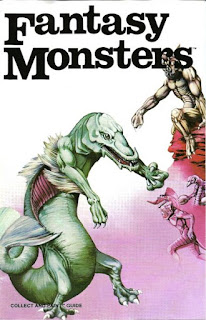 Why is this boxed set so great?  Firsta of all, any campaign should have at least one or two custom GM critters that feature prominently in play.   This box set gives you ten new freaks that you could stat up and be assured that no one has ever encountered them before.  Hell, this set is practically a taunt in 25mm lead form, "Here's a dragon kid.  I dare you to figure out what to do with the rest of these weirdos." 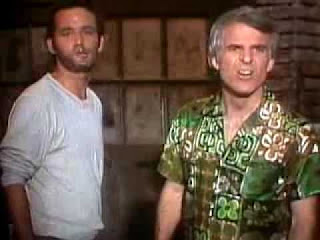 Second, if you're the kind of DM who uses miniatures, you should always have at least one figure that you can use as the "What the hell is that?" monster.  Ideally, you don't want to use a figure that evokes any particular hit dice or abilities or behavior.  If you use a troll, for instance, the players will tend to start thinking trollish thoughts about your decidedly non-troll weirdo monster.  A figure that is monstrous but a blank slate as far as past associations is best in these circumstances.

And there's no reason why you can't do both with these figures.  Take your favorites and turn them into regular features in your campaign and take the ones you consider duds and set them aside as fill-in-the-blank figures.

The one thing these critters don't have going for them is size.  I'm pretty sure that the dragon is the tallest figure in the bunch and I don't think it's any bigger than 2" tall.  The five eyed terror is more typical of the set, and it is about 30mm tall.  That's not very big and menacing in today's 28mm world.  Of course, nearly all the monsters in your minis universe (except orcs and skeletons and whatnot) could be much bigger is you started using Caesar 1:72 plastic Adventurers, Copplestone Castings 10mm Heroes and Halflings, or Perfect Six Scenics 6mm Adventurers.  Heck, nowadays you can even buy 10mm dungeon rooms, corridors, and furniture from Pendraken.

By they way, three of the figures in Pinnacle's Fantasy Monsters set were also sold by Grenadier in a blister.  Fantasy Lords number 147 contained the One Eyed Pit Monsters, Ram Horn, and Barracuman.  Grenadier was later bought out by the French company Mirliton, or they purchased the molds or something like that.  You can still get a lot of old Grenadier designs at www.mirliton.it, including a four pack called Horror Monsters, which contains the Five Eyed Terror, One Eyed Pit Monster, Tri-Ora, and Red Horned Mane.

Anybody have this set back in the day?  What did you do with it?

Almost forgot: much of the info and many of the images in this post come from the thoroughly excellent Lost Minis Wiki.