Don't give up. Don't beg for mercy. Bargain! 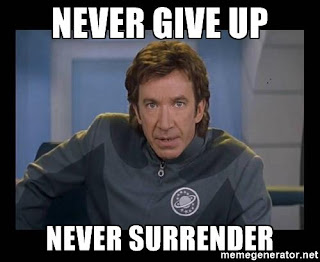 Over the years almost all the explicit gaming advice I have offered here has been directed to the referees, Dungeon Masters, and Game Masters of the hobby.  After all, these deranged individuals need all the help they can get.  But today I'd like to offer some advice to the players who must put up with these sick, sad weirdos.

And here it is: bargain for your life.

Years of con sessions and tabletop campaigns and Google Plus gaming have shown me lots of players who all too readily give up at the very moment they should be marshaling their every resource.  That is the moment when their PC kicks the bucket.

Here's the thing.  The title of my current campaign handout is Jeff Rients Wants to Kill Your Fucking Character, but that title is, in fact, a lie.  I want to try to kill your character.  And I certainly will kill your character.  But what I really want to happen is for you to survive by the skin of your teeth, exiting the dungeon with the thrill of knowing you very well could have died.  Frankly, the treasure is just icing on the cake of daring to enter the dungeon and getting away with it.

It's kinda like how I teach (actually how I teach is kinda like how I DM).  At the start of the semester I tell the students what I will expect of them in terms of the reading, writing, research, and thinking.  I tell them they will be challenged.  Then I tell them that if they don't do it, they will fail the course.  Now, I don't want any of them to fail.  (In fact, I basically only give out F's for not showing up or not handing things in.)  What I want is for them to be challenged and then congratulate themselves for rising to the challenge and doing great things.  I'm rooting for my students to succeed.  Very few things in the world make me happier than to see my students learn stuff and get good grades.

But at the end of every semester I get at least one student who didn't believe me when I said I would not hesitate to fail them for Not Doing the Things.  They show up to my office and/or email me extensively, desperate to wriggle out of the bad predicament they've gotten themselves into.  They ask for extra credit.  They offer to revise and resubmit.  They outright beg.  They cajole.  Sometimes they cry.  It's an unfortunate scene and thus far it has never worked.  But I don't mind taking these meetings.  These young people are simply trying to avoid the chickens coming home to roost as best they can.  I just wish they had been as quick-thinking and resourceful earlier in the semester.

I think more players should be a little bit like those students.  Doom comes at an unknown time for the PC, not at the end of 16 weeks ill-spent.  Why accept your fate with quiet dignity?  Dig this fairly typical scene:

DM: Hendrik the Beefy rips the door off the hinges!  Unfortunately, the hobgoblins on the other side heard your argument about whether to check it for traps or not.  They have crossbows ready.  Hendrik is hit five times for 19 points total!
Player (crumples charsheet): I only had 6 hit points.  I'm dead.

NEVER DECLARE YOURSELF DEAD.  Let the DM do that.  I want your PC to live, but if you've given up on them, why should I care?  I can't tell you how many times I've seem something like this.  I think it stems from players a) assuming they know the rules in play and b) thinking the rules are in charge of the game.  I love my D&D rulebooks, but they aren't running this show.  I am.  Give you and your PC the breathing room to see if that fact cuts your way or not.

When you believe you are dead, think quickly and try to come up with a very brief retcon.  A good DM understands the fluid nature of the shared imaginative space the game inhabits and will allow reasonable and judicious editing of the last few moments of play.  Here's what could have happened:

DM: Hendrik the Beefy rips the door off the hinges!  Unfortunately, the hobgoblins on the other side heard your argument about whether to check it for traps or not.  They have crossbows ready.  Hendrik is hit five times for 19 points total!
Player: Dang, I only have 6 hit points...  Wait a second.  You said I ripped the door off the hinges, right?
DM: Yeah, I guess I did.
Player: So maybe the door gave me cover against the crossbow bolts... eh?
DM:  That makes sense, I guess.  But I've already rolled to hit and damage, so I'm not going to take back all of the hits.  Roll a d4.  That many bolts hit the door instead.
Player (rolls): A three!
DM: Okay, the first two bolts hit you but you pull the door up in time to block the rest.  You take 5 points total.
Player: Whew!  Hendrik's only got 1 hit point left, but I'm still in the game!

Looking for these sorts of environmental factors is something you can do for other players as well.

All your precious things are less important than your life.  That goes double for your PC and their stuff.  Trade that crap away!  Not every DM will take the bait, but some will eat up the opportunity to let you live in exchange for making your life miserable.

Player: So maybe the door gave me cover against the crossbow bolts... eh?
DM: No way, dude.  You suspected there were hostiles on the other side of that door.  We both know Hendrik would discard that thing as soon as possible to get out his axe and shield.
Player: Okay, looks like Hendrik is going down.  But maybe I can linger at negative hit points for at least a round so the cleric can heal me.
DM: Not at negative thirteen hit points.  Minus nine or less, maybe you've got a chance.
Player: Shaving off four hit points might save my bacon?  Okay, imagine that the one bolt that is worth the most damage doesn't hit my body.  Instead...
DM: I'm listening.
Player (snaps fingers): Instead it hits my magic amulet!  You know, the one that allows me to cast
Strength on myself 3 times a day?  I wear it on a chain around my neck.  Maybe it catches the deadly shot just like the cigarette case in Johnny Dangerously!  Whaddya say?
DM: Okay, I'm sold.  Your amulet is shattered into a dozen fragments and you hit the floor.  You're at negative nine hit points and not dead.  Not this round, at least.

Many of us, myself included, get so excited about magic items that we sometimes forget that their primary purpose is to keep our PCs alive for another day.  Your magic sword might be hella sweet. but it doesn't do you any good if your PC is a lifeless corpse.  (I guess that puts me in Thulsa Doom's camp vis-a-vis the Riddle of Steel.)  Why not trade that enchanted blade for your life by offering to have it block the death blow, breaking it in the process?  Heck, I might let a regular sword do the same job.

This idea is just a less formalized version of Trollsmyth's famous Shields Shall Be Splintered! house rule, which IIRC tied with Dwimmermount's Liquid Courage for Best New House Rule of 2008.  You bet your ass you should be offering to shatter your shield to save your PC's life.  Helmets ought to work well, too.  I might even allow suits of armor to be busted up, say to the tune of d4 points of AC lost.  Sure that means the next attack will be easier to land, but when you life is in peril you worry about the next thing next, not now.

Look for other opportunities to trade mere stuff for a prolonged life.  Maybe that dragon's breath didn't incinerate you.  Maybe it set your cloak of elvenkind alight and you quickly discarded the burning garment.  Instead of falling into the pit of acid, your buddy caught you in the nick of time.  Sure, you dropped your large sack full of loot into the acid, but at least you're alive.  And coldblooded PCs should be putting their henchmen and hirelings between themselves and the grim reaper whenever possible.

Finally, consider the difference between your PC's body and their soul.  Better to lose a limb or an eye than die outright.  Next adventure you could be rocking a peg leg or a eye patch.  How cool is that?