I wonder if this ever happened.

It's 1979 or 1980 and you're a bright, imaginative youth living in a remote rural part of the United States.  Maybe once a month or so you get to the nearest town where you can buy a paperback novel or a comic book with your meager funds.  On one such expedition, you find the blue Holmes Basic D&D on the shelf of a toystore or the toy section of a department store (even a hardware store isn't out of the question).  For purposes of this hypothetical, we'll assume your usual bookstore doesn't stock D&D stuff. 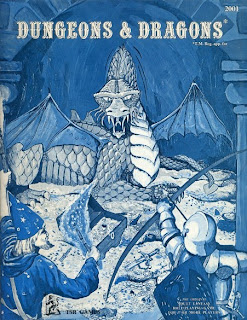 You read the book several times, only dimly understanding at first, and eventually run the game for a circle of friends that become the only game group for miles around.  The game is played off and on for a year, maybe two.  Perhaps after everyone gets several characters each to third level, interest begins to wane.  You decide to re-read the rules and try to suss out how higher level characters work based on the mention of higher spells, extrapolating the XP charts, etc.  But on this read-through you re-discover something glossed over in early attempts to understand the book: mention of an Advanced version of the game.

You resolve that the next time you go to town you will check for Advanced D&D at the place you bought your original D&D set, but you don't find any Advanced D&D.  Maybe they sold out or maybe the person responsible for ordering stock doesn't think the toy section of hardware store needs expensive hardback rulebooks.  But you do find this: 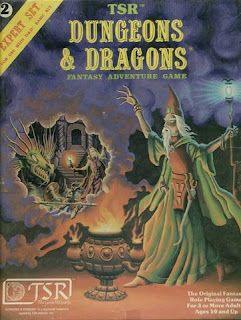 That "Expert Set" up in the corner sounds kinda like an Advanced version of D&D, so you plonk down your cash and bring it home.  It turns out to be exactly what you need!  More spells, more monsters, more treasures, rules for characters to 14th level and lots of clarifications of the rules you didn't understand (like how elves work).  There's a passage explaining that this Expert Set is designed for a new version of the rules you are using, but also there's advice for how to use your version with the Expert book.  You keep the scroll rules from the original book and your slightly wonky initiative interpretation (you don't even realize it's a house rule), which uses Dex somehow and allows daggers to strike twice under some circumstances.

The Expert rules mention two other texts.  In a couple of places a Companion rulebook is mentioned that will allow for even higher level play.  You spend years bugging the staff where you got the Expert set.  Every time you're in town you go an ask them if the D&D Companion set is out yet.  Eventually some of them recognize you and shake their head before you can even ask.

Meanwhile, it turns out that your cool weird aunt, the one who lives in a distant college town, was actually paying attention when you were yammering on about the Best Game Ever and actually tracks down a copy of the other rulebook mentioned in the Expert rules: 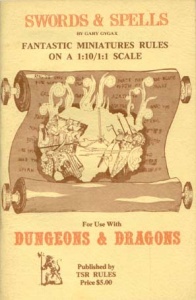 Go ahead and look at the bottom of the first column of page X25 if you don't remember this book being mentioned in the '81 Expert rules.

So now you got this weird little booklet from 1976 with strange rules for mass combat.  Some of the stuff in this book you can adopt right away, like the weapon reach rules or the morale rules (which are pretty sparse using Expert without Moldvay Basic to explain them).  The rest of it requires a lot of work to understand and obtaining a large quantity of figures, which is probably not practical given that you are so far out on the edge of the hobby's supply chain.  So you either don't do mass combats despite owning these rules or else you go on to make your own armies out of haphazard materials.  Maybe you even sculpt your own armies out of clay or whittle them or something.  That's what M.A.R. Barker did for Tekumel back before the hobby had a commercial sector attached to it.

Meanwhile, 1984 rolls around and your long-promised Companion rules finally appear! 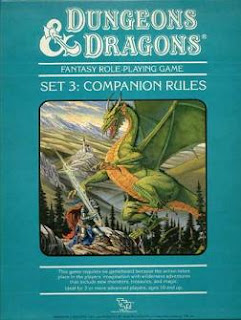 There's lots of cool stuff here: new weapons, new class options, crunchy unarmed combat, level charts to 25th, weird monsters (including bigger dragons) and the War Machine, a less mini-focused and better written mass combat system.  Combining the War Machine with Swords & Spells allows you to play out in detail battles the PCs attend while the overall war is somewhat more abstracted.  Too bad the level charts don't go to 36th as promised in your '81 Expert rulebook, but the Companion rules promise a Master set that allows for characters up to 36th level as well as the chance to attain Immortality.  Pretty cool!

So there you have it.  A scenario under which over 4 or 5 years you can draw a line across 4 different editions of D&D and still be playing "by the book".  That '81 Expert rulebook connects you to three other editions.