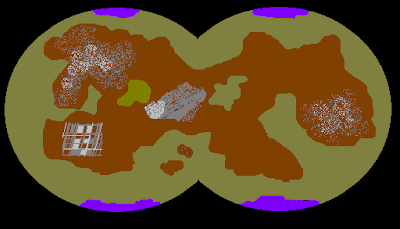 The dark brown represents the single landmass on the planet, surrounded by a polluted ocean. The only non-polluted water on the planet is trapped in the polar caps. A few thousand years ago Neldanis IV was an ordinary filthy middle-tech industrial world, but nearly everybody abandoned the place once hyperspace travel made emigration cheap and easy. The Techno Union eventually took over stewardship of this poisoned sphere, turning the whole world into a hi-tech dumping ground. Visitors to Neldanis IV are urged to use breather masks, like the ones used inside the cave/asteroid worm in Empire.

The grey areas on the map are the individual scrapyards, with the densest grey blob in the center of the map the region the PCs can expect to find the scrapped KT-57 Repair Shuttles. The smaller island is a military proving grounds, where new weapons systems are sometimes live-tested. The squarish grey area is overflow storage for Honest Sclorbax's Used Speeders. Nearly every civilized world has at least one Honest Sclorbax's and they take a lot of trade-ins.