Per Stuart's request, here's the one panel appearance by Wolverine in Marvel Two-in-One #100. 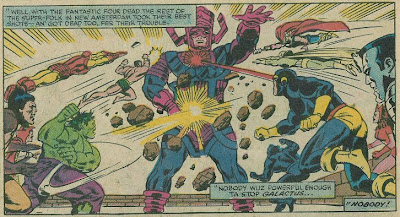 In case you can't tell, that's Weapon X on the far left. I'm sure other folks can come up with more ineptly drawn/inked Logans, but I don't own a pile of X-Men books. I think I've bought one issue of X-Men in my whole life, the one where Rachel Summers tries to kill the Beyonder and hilarity ensues. Back in '91 or '92 I did read the entire run of Wolverine's solo series, but I was borrowing those mags from another guy in my dorm so I don't have them any more.