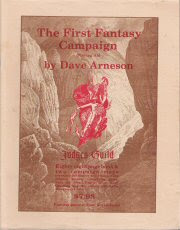 In 1980 the good folks at Judge's Guild were already putting out retro stuff. They published an item call The First Fantasy Campaign, but Dave Arneson. The book is basically an choatic mess of campaign notes from the first few years of Arneson's original Blackmoor campaign. It doesn't really cohere as a setting you could run as-is, but as a look back at a bygone era this stuff is pretty dang cool. This week I'm gonna share snippets from the book and give my take on them.

First up we have a couple of lines from page 50 of FFC. The page header is 'The Original Blackmoor Magic System', but no magic system really follows this title. Instead we get a couple of paragraphs broadly outlining the system, but no actual system. Then we come to a subsection labeled 'Description of Magical Items' which contains no magic items. That's just how Dave Arneson rolls, my friends. But we do get 10 entries of high tech items that could be passed off as magical to the rubes in the campaign world. This where we get the robots. Below are the entire First Fantasy Campaign robot rules.

Robots: I roll one 6-sided dice for Armor Class and another dice for the number of Hit Dice. All Robots have a 10% chance of being able to throw one Lightning Bolt every turn for up to 20 Bolts.

Controller: Allows players to get Robots to do what the player wants, otherwise, there is only a 20% chance you can use the Robot, 20% chance it is defective, 60% that it is hostile.

That's it. Note that these rules may pre-date the turn/round division of game time, meaning that Lightning Bolt equipped robots might be able to fire every round of combat. I'd probably have robots of three Hit Dice or less to do the standard 1d6 damage in melee, with bigger robots doing 2d6.