While cleaning out my game room I came across a dungeon map I made years ago. 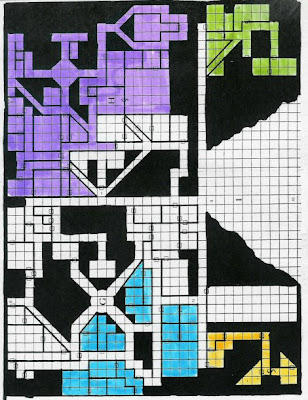 This map was constructed out of TSR dungeon geomorphs. I don't think I ever ended up using this particular dungeon, as the rooms are unnumbered. But clearly I had plans to stock this thing using a methodology that was at least partially non-random. The colored areas are clearly zones of control, where groups of monsters (humanoids, probably) could carve out a territory. The purple, green, and yellow areas are strongly defensible, with few entrances. Off the top of my head, the purple area would be held by something fairly tough but numerous, say hobgoblins. The blue area is slightly different from the others. The mazey corridors make holding all those rooms a tougher proposition, so that area would be the poor section of town, where maybe a large but desparate band of goblins live on the edge of extinction. They're all just one wandering monster roll away from being lunch for an ogre. The unmarked sections of the dungeon would have many empty rooms and but otherwise be filled out with randomly generated contents.