unfocused thoughts on the Wilderlands 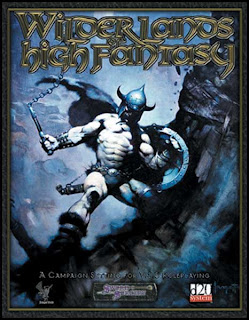 I've been thinking a lot over the past week or two about the Wilderlands of High Fantasy boxed set. A wide range of really cool people over at TheRPGsite recommend this setting. I've given the free preview a close look as well. If you don't know, the Wilderlands setting was originally released by Judges Guild back in the day. It came out years before Greyhawk or any other big D&D setting. The new boxed set (Well, it was published in '05. That's still 'new' by my standards.) is a d20 update of all the old material, greatly expanded with lots of stuff.

Long story short, the Wilderlands boxed set is a hugeass map (eighteen 17" x 22" sections) covered with hexes. And a whole metric assload of those hexes are given short entries outlining their contents. It's the ultimate sandbox setting, as described by Melan. You could literally start a campaign by dropping the PCs into any hex on the map and they'd almost certainly be within a day or two of an adventure of some sort. We're talking *years* worth of "wander the map, get into trouble" style adventures. And the statblocks are as light as humanly possible for a d20-based product. You could run Wilderlands under a different system and not be wasting that much of your purchase. I look at the Wilderlands free preview and see a product that could be run with any version of D&D, or C&C, or Iron Heroes, or MERP, or RoleMaster, or even Encounter friggin' Critical. I am totally not joking about that last one. Hell, you could use Rifts and maybe make it work. The setting has the solid foundation needed to run it straight vanilla with the Rules Cyclopedia or MERP and the elasticity to go totally gonzo.

On one hand, a prefab world full of a million awesome mini-adventures is exactly the sort of product that I need. Setting books that read like encyclopedias appeal to me less and less these days. According to reports, Wilderlands excises that stuff from the boxed set and puts all that in the Player's Guide hardbound. Instead you get a whole world laid out like the outdoor adventure map in the Keep on the Borderlands. That's what I want. A sandbox all about the adventure, not a setting that exists as a thing unto itself.

On the other hand, part of me shies away from getting the Wilderlands boxed set. And it's not just my inner cheapskate at work here, unable to part with 45 bucks for a stupid game. Rather part of me sees the elegant structure of the Wilderlands and sees that I could do that myself. I could get a big ol' numbered hexmap, sketch out some terrain, and stock a bunch of hexes. Would I get that same level of do-it-yourselfer buzz by adding stuff to the Wilderlands? I dunno.

Another issue is the inherent tension between a big expansive wilderness and a big expansive dungeon. I like campaigns that focus on a big, nonsensical dungeon. But a party out exploring the wilderness isn't plumbing the depth of the dungeon and vice versa. Won't either one or the other get ignored a big chunck of the time? Another advantage of the do it yourself approach is that I could start with a mostly blank wilderness map and let the players fill it in as they explore out from their starting locale. That would be cool.

Maybe it all comes down to which I have more of, money to blow on stupid game crap or time to devote to a homebrew setting. Some days it feels like I've got neither.