Not that long ago if you had asked me "Jeff, what's your favorite individual issue of a comic?" I probably would have stammered like an idiot. My brain just doesn't always work like that, putting everything in my life into nice neat best and worst categories. But earlier this month comics blogger Chris Sims made an off-hand remark in a review that clarified things for me. "Take a moment and think about that one Marvel story that stands out for you above all the rest. Now imagine how much more awesome it would be if the Enforcers were in it."

Suddenly, I knew exactly which comic was my favoritest in the whole wide world, because my mind was swept up with the amazing possibilities of adding the Enforcers to one particularly old Marvel rag. 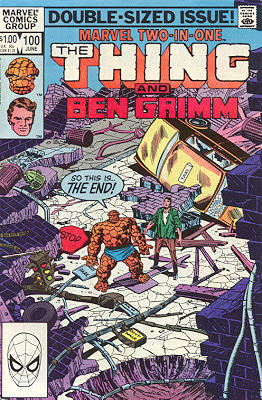 Marvel Two-in-One is my favorite comic series from back in the day. I buy almost all my old comics out of the cheapass bins, but Two-in-One I'll actually pull out of the expensive back issue boxes. The formula for this comic has always been very simple. The Thing plus some guest star get together and then lotsa fights happen. Sometimes they team up to beat down a baddie, other times the Thing and the other character just wail on each other. Either way, my favorite superhero always had the front and center of the story, unlike many of his appearances in the Fantastic Four. I got nothing against the rest of the FF, but they don't amuse me the same way brooding orange rockmen do.

I've not read the full run of Two-in-One yet, mainly because I'm not really a full run level collector. I think the only full run in my comics box is the DC mini-series Spanner's Galaxy. But I've got a haphazard collection of issues, and just today I snagged the two Essential collections on eBay for less than 20 bucks, including shipping. Hot dog, I can't wait for that box to arrive in the mail!

Number 100 was the last issue of Two-in-One, but it was immediately followed by a Thing solo series that was pretty good. The Thing wasn't quite as nutty as its predecessor, simply because the title didn't have to shoehorn in a random guest star each month. But I still grab back issues of it when I can.

I'm not going to scan in the highlights of Two-in-One #100, because if I start I'll end up scanning the whole frickin' issue. It's that jampacked with awesome. Instead, I'm going to hit some bullet points of what makes this issue so much fun. If anybody request scans of a particular item on this list, maybe I'll post some pics later this week.

Seriously, aside from the pisspoor Wolverine, this is my idea of the perfect comic.