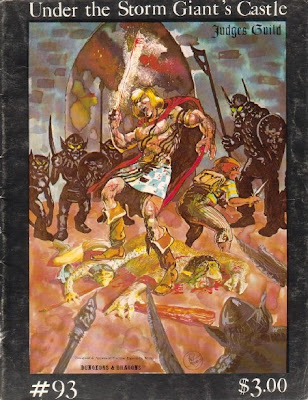 I'm no expert on Judge's Guild D&D modules. I own their entire Traveller line, but my collection of D&D stuff from them is very spotty. I've never owned classics like Caverns of Thracia or Dark Tower. So I can't really comment on the entire oeuvre of JG adventures. (Can you use 'oeuvre' to describe a publisher's output? I dunno.) But I know what I like. Under the Storm Giant's Castle is cited by some as the worst D&D adventure the Guild ever published. Those folks are free to mail me their copy, 'cause this module is freakin' awesome!

Okay, to be fair to those folks, Under has some flaws. The text if full of annoying little typos. The castle mentioned in the title is not detailed. You adventure under the castle, just like the title says, but a simple castle map with a few detailed areas wouldn't be too much to ask. Especially since the adventure is short and pagecount is padded by fullpage art of fair-to-middling quality. And the cover art is a grievous wrong. You won't find many worse cases of a game cover totally misleading a buyer about the contents of the book. The bleeding warrior standing atop a couple corpses, surrounded by shadowy goblin-types utterly fails to represent anything that happens in the book. Even the general tone of desparate heroic action seems like a far cry from the delightfully weird romp inside.

I'm not going to provide a lot of spoilers for this book here, because I'm so enamoured of my recently-acquired copy that I intend to run it as a con game. But I'll share what I can. The adventure begins by a storm giant couple recruiting the party. Their baby was kidnapped by something living in the dungeons under their castle. But the storm giants can't enter the dungeons themselves because the access tunnel is designed for smaller folk. The fun of this is that the storm giant's home is one of those floating cloud castles and the entire dungeon is set inside a magical cloud! And the walls, floors, and ceilings are composed of billowly, fluffy, cloudstuff. This is the first dungeon I've seen with weather on the wandering monster matrix.

The encounters in the dungeon are a mix of fairly standard dungeon fair and totally zany off-the-wall crap. Several encounters feature some subplots afoot in the cloud. This is no static dungeon. Stuff is happening as the PCs arrive. They can be caught up in the plans of wayward wizards or forces even more mysterious. And they'll meet some new monsters the players will never forget. We're talking Vampusa level weirdos. (My D&D group is still kinda weirded out by the vampire/medusa they fought in House of the Axe, Calithena's Arduin module.) And the big badguy behind the kidnapping is probably the biggest surprise guest appearance in the entire history of gaming, even beating out that one time in a action movie game I ran where Christopher Walken himself turned out to be the Crime King of L.A. If you know who the bottom level lord of this module is, please don't spoil it here!

On a scale of one to ten, I give Under the Storm Giant's Castle a rating of totally weird-tastic.