Adventure I
THE GREAT DATA ROBBERY
It is a period of great strife.
Rebel agents have been sent
to the junkyard world Neldanis IV
to retrieve and repair a scrapped
KT-57 Repair Shuttle, which they plan
to use to sneak aboard the Imperial starship
RECONSTRUCTOR, one of the vessels being
used to build the Evil Empire's new Super Weapon.
The computer on the Reconstructor contains crucial data
that will allow the Rebel Alliance to destroy this terrible new
weapon before it can tip the balance of power in the galaxy... 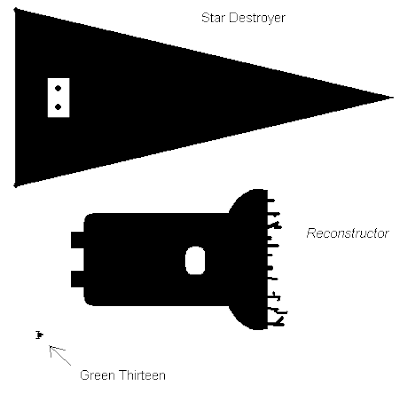 "During the Clone Wars the Forge-class TechnoDreadnoughts provided shipyard-level repair and maintenance to Republic capital ships in the field. Most Imperial Records show that the last of the Forges were taken out of service several years ago, either scrapped due to wear and tear or sold off to commercial ventures. But Rebel intelligence has recently discovered that the Reconstructor was taken off the books and secretly put to work on the Empire's new super weapon.

Back in the day each Forge-class carried fourteen KT-57 Repair Shuttle in addition to its usual array of ship's craft, but the KT-57's had a much shorter service life and were never replaced. Most of them were sold off but a few were junked on Neldanis IV. Rather than docking in the shuttle bay, each KT-57 fitted into a custom docking socket, basically an exterior airlock with clamps to hold the shuttle to the hull of the vessel. Using a KT-57 should allow you to enter the Reconstructor and bypass ship's security. The Reconstructor is currently undergoing maintenance in orbit over Urgonia, one of the busiest commercial and military shipyards in the galaxy.

We're issuing you uniforms appropriate to Imperial maintenance personnel, so you can move through the ship relatively safely. Once inside the Reconstructor, you need locate the central computer on level D-14 and copy all the technical data on the 'Death Star'. You must deliver that data to the diplomatic vessel Tantive IV, which will be waiting for you at the following coordinates inside Vuldrak's Nebula. We've arranged a rather large distraction for the Imperial Navy during this operation, so even if the situation inside the Reconstructor gets messy pursuit should be minimal. Any questions?"