He's intelligent, but not experienced. His pattern indicates 2-dimensional thinking...

Anybody else remember that line from Wrath of Khan? Ricardo Montalban has been kicking Kirk's ass all over the Mutara Nebula when good ol' Spock comes through with this little observation. 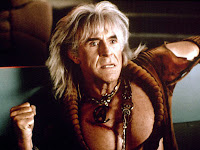 The Enterprise and her crew beat the eugenic madman by exploiting his inability to consider space as a three-dimensional battlefield.
Khan's vulnerability to the third dimension reminds me of an issue I see with a lot of dungeons. Even many incredibly awesome dungeons suffer from a basic problem in that we, the dungeon designers, allow the graph paper to do some of the thinking for us. My own dungeons, such as Under Xylarthen's Tower, suffer from this issue, as do Stonehell and Mad Archmage, and many other great fan efforts and commercial releases. We end up with levels as discrete layers stacked one upon another. The connections between the levels often appear as rare accidents or afterthoughts.

One effect of Khan's Disease is that the vertical cross-section views of many dungeons, even well-rendered ones, end up being orders of magnitude less interesting than the horizontal levels. If all a cross-section does is point out that level 3 is above level 4 then I think maybe it's time to go back to the drawing board. I'm not saying there's anything inherently wrong with a dungeon where each level is neatly stacked upon the next and they're connected only by the occasional staircase/slide/elevator. My point is that there are a lot of other possible configurations that we could be exploring.

I'm mostly thinking about big open spaces that connect a multitude of levels. Imagine the entrance to the Caves of Chaos as a cave deep in a dungeon. From where you enter this vast chamber on level X you can climb up to level X-1 or down and across to levels X+1, X+2, etc. A simple example of this sort of thing can be found in the old Judges Guild module The Caverns of Thracia: 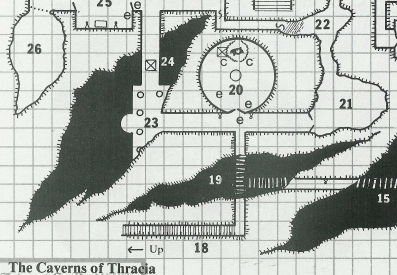 Thos craggy black spaces are voids in the rock. If the PCs fall off the bridges that span them, they land on the level below. More important, if they have some rope or levitation magic or something like that the party can choose to desend into that inky black darkness.

Additionally, those wide open spaces also serve as a nice counterpoint to the claustrophobic dungeon room more typical of level design. Imagine your party crossing a bridge over a gulf so vast that their torches fail to illuminate the floor below, the ceiling above, or either end of the bridge. That'd creep me out.

Or focusing on just a single level for a moment, instead of a completely flat dungeon level consider the possibilities in something like this level from the more-obscure-than-it-deserves "Night of the Walking Wet" (from the Dungeoneer Compendium published by Judges Guild): 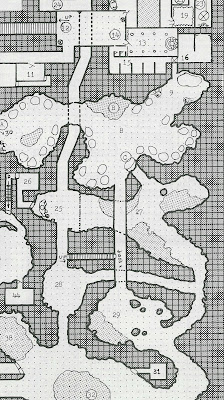 Passing under and over passageways on the same level may leave the party wondering exactly what level they are on. That is not a bad thing.

Another great example of 3-D dungeon design is the cheap-as-free Mines of Khunmar by Stefan Poag. The dungeon key is woefully incomplete but the map is definitely worth the price of admission! These old Judges Guild maps also have some interesting features work looking at.

Poag and Paul Jaquay (who did both maps above) worked at the dawn of our fair hobby. With three decades under our collective belt I think we can do at least as well as those pioneers. The simple fact is that a good 3-D dungeon design equals more prep work and more forethought. As a dungeon designer you can't just start at level one and slog your way down if you want to end up with an integrated 3-D design. Instead, you need to develop a plan. Examples:
The other challenge is effectively communicating the third dimension to the PCs as they encounter these areas. They need to know if they can climb, fly, or crawl to reach various parts of the level.

I'll end the post with some inspirational illustrations. If you dig dungeon design do yourself a favor and track down a copy of Scooby-Doo in Where's My Mummy? A big part of this movie-length adventure occurs in the secret Tomb of Cleopatra located under the Great Sphinx. Here's the Mystery, Inc. gang as they first enter the tomb: 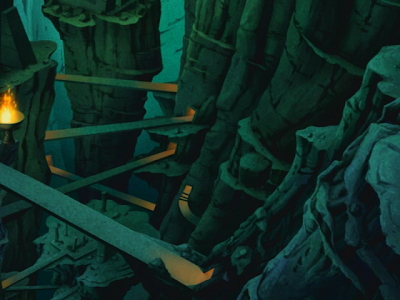 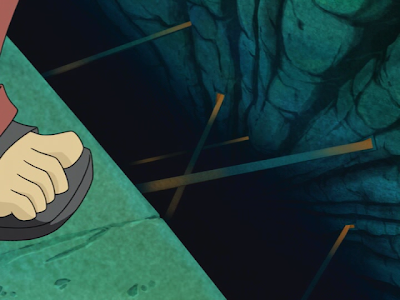