Most gamers I know seem to agree that Darlene's map of the Flanaess (the core region of the World of Greyhawk) is one of the best examples of fantasy cartography in the business. There are several reasons why Darlene's map stands out among the crowd of competitors. I want to share just one of those reasons today: the labels. All the labels on the map are hand-drawn. There's a unity of vision to them but unlike a map that relies on a font for the heavy lifting the labels have some interesting variety to them. This gives the Flanaess map a layer of depth and nuanced authenticity missing from many later computer-generated rivals. 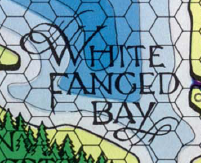 I'm sure there's a technical term for the decorations on the W and Y on White Fanged Bay, but I don't know enough about calligraphy or fontography to say anything other than "Man, that looks cool." The upper case F that drops down low is a neat effect repeated on many other labels on the map. 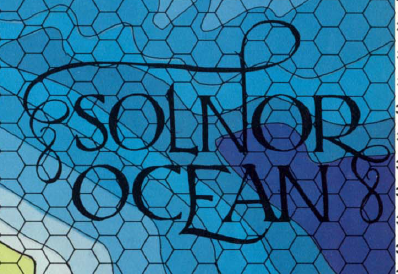 That N has to be the greatest N in the history of the letter N. The E and R are neat, too.

See how the A in Uplands is nested in the L? You can't do that with a normal font. In many places Darlene also uses the same technique with the double L's in the word Hills:

But she's also not afraid to mix it up a little:

That double T is a pretty cool effect as well. Note also the tall L's in Little and the 'high hat' drop-down H.

The F nested in the O to make 'of' into a single glyph is a fun little trick.

You might want to click this one to see a larger version. Note how the two Ruins are essentially the same, but have minor differences, particularly in the R's and S's.

While I love the J and the Y here, this is the one label on the map I have trouble reading on a casual pass. Is that 'Jeklea Bay' or 'Jerlea Bay'? In fact, I tend to see it as 'Jerklea Bay', the Bay of Jerks. 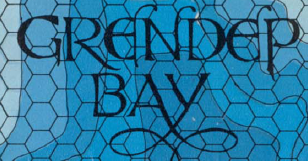 I love how the A and Y intertwine here. Those hooked E's appear nowhere else on the map. 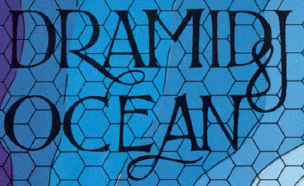 Lots of interations between letters here. My eye first picks up the R and the C up to no good, but then scans over to the menage a trois of the D, J, and N. Kinky.

This is the only place on the map where N and E are combined into a single character.

I like how the L and K poke up above the rest of the letters. Also check out the two O's. They're clearly not identical but clearly the same letter. That's gives a sort of organic feel to the word that a normal computer font doesn't produce.

Notice the differences between the initial A in Azure and the final A in Sea. Also, that Z rocks on toast. Zorro wouldn't hesitate to use that puppy.

The Axewood is a tiny little no-account forest on the map. I had to blow up the scan to even show you the label. But Darlene takes the time to do something different; that double hook E appears nowhere else on the map. That's an act of love, I think.