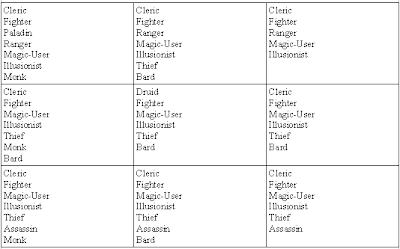 Ever alignment has six or seven class choices, except for Chaotic Good. CG gets the short end of the stick with only five. If you take out the ever-problematic Bard then CN also only has 5 options and the LG and LE become the only alignments with seven class options. Either way you cut it, each alignment has 6 +/-1 classes associated with it. Law is slightly favored over Chaos, but not by much.

Looking at OA, the situation is much more asymmetrical. Dig it: 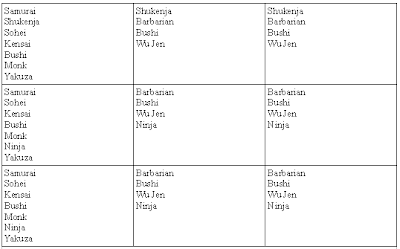 The Lawfuls get seven classes and every other alignment only get four. This design choice seems aimed at an overall theme in OA: that the Mysterious East has a more rigidly organized societies than good ol' Pseudo-Europe. I'm not really against this particular conceptualizing of Totally Fake Orientland, but that uneven distribution feels pretty odd compared to normal Gygaxian set-up where every alignment has a fair share of the goodies.