it's a family affair

The last page of the original Oriental Adventures rulebook contains the following chart: 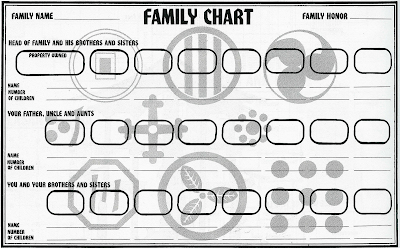 Players of most OA classes are expected to fill one of these babies out. The basic deal is that you identify the head of the clan and 0-7 siblings and then figure out which one of these people is your PC's grandfather. You then identify your father and 0-7 uncles/aunts. After that you name 0-7 siblings. There's a spot for recording other bits of family info that you can dice up in chargen, such as properties owned by the family. A completed form looks something like this: 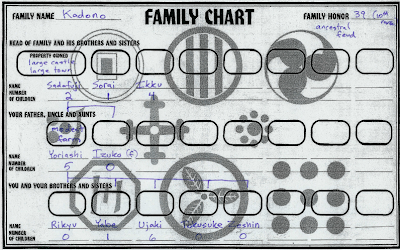 All the names were rolled up on the charts from the Dragon article "Whaddya mean, Jack the Samurai?" (issue #121, I think). That article consists of 400 random family names and 400 given names for Japanese characters, split into eight percentile charts.

Anyway, look at all the neat potential trouble lurking in that clan chart. The PC's father and grandfather control all the clan holdings. Does that rankle Great Uncle Sorai or Great Uncle Ikku or any of their children or grandchildren? And are they willing to do anything about it? And what's up with Aunt Izuka? She's childless and apparently not married off to another clan. Is she a widow, her husband and/or children slain by Clan Kadono's traditional enemies? Or maybe she's an independant woman, a samurai in her own right or a sorceress or something like that. Or maybe she was married at one time but fled her husband's household for some reason. Either way, there's possibilities here that didn't exist prior to the dice hitting the table.

But the most interesting thing in the OA family rules (and the thing that may most distinguish Oriental Adventures from baseline D&D) is the fact that everyone on the bottom line of the chart has d8-2 children. That's the PC's generation and the implication is that 75% of all PC samurai, kensai, barbarian, bushi, ninja and yakuza start play as parents. That fact strongly implies that many starting PCs are married as well.

Adventurers with a wife and kids back home is a big conceptual leap from the (oft unstated) default position that PCs are unattached. I'm pretty sure even Pendragon, a game where establishing a dynasty is crucial, waits for play to begin before PCs get married and start families of their own. I'm not sure what all these spouses and kids mean for my still-in-development Saikaido sandbox. My assumption up until this point is that all the starting PCs enter the wilderness map from the more civilized regions off map to the northeast. Maybe I should change that so that PCs who desire to travel home can do so without leaving the campaign area.

One neat thing about the OA family rules is that integrating replacement PCs becomes easy. If Kadono Rikyu dies in battle, his little brother Yabe can show up to avenge him.