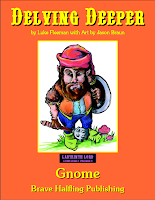 John Adams of Brave Halfling Publishing was kind enough to send me a copy of his outfit's new PDF for Labyrinth Lord-playable gnomes. Delving Deeper - Gnomes is a three page PDF written by Luke Fleeman with the cover by Jason Braun. Since the first page is the neat cover by Mr. Braun and the last page is the Open Game License, we're only talking about one page of gameable content. Even at 75 cents for the download some people might find it hard to swallow paying for such a small dose of gaming material. Personally, I don't find cost per page analyses to be very useful. Either I need a page full of gnome stats or I don't and either this particular product helps my game or it doesn't. At under a buck the cost is so close to free I just don't consider it a relevant issue. But I got a comp copy, so what do I know?
The gnome as presented by Mr. Fleeman gives an operational framework that includes both of the mechanical aptitude of the tinker gnome archetype and the illusionist magic of the pre-Dragonlance era version. The mechanics are straightforward, relying on previously established LL/D&D norms. I like the class. It's simple enough to be used for NPCs and I would definitely try it as a player. In fact, I think I like this incarnation of the gnome more than any other version I've seen to date.
I do have three little issues with this product. First is the XP chart. Per Fleeman gnomes need 4,065 experience points to get to second level. That's the same as an Elf run under Labyrinth Lord. I just don't buy the implication that the two classes are equivalent in power. The Elf is better than the Gnome in in terms of hit points, spell ability, armor usage and attacks. My gut tells me these disadvantages are not offset by the gnomes mechanical ability, 90' infravision or better saves. The point is debatable, but the XP chart was a definite WTF? moment for me.
The second issue that may annoy some people is that the Delving Deeper version of the gnome doesn't interact with the gnome as presented in the Labyrinth Lord rulebook. Gnomes in LL are creatures of base 1d8 hit dice and leader types of up to 4HD ability. None of these NPC gnomes have any spell abilities, so it is impossible to stat up baseline LL gnomes with this class. I don't consider that a huge issue, but I wouldn't have minded a second page (or even half a page) with rules and XP chart for more fighterish gnomes like in the main rulebook.
Finally, that 90' infravision I mentioned before bugs me a little. In my games I try to take dungeoneering seriously and just handing out infravsion that's 150% better than standard to some pudknocker illusion jockies rubs me the wrong way. I doubt it would screw up things up, but I don't like messing with dungeon operations without clear signs that the implications have been thought through.
None of these issues is a dealbreaker for me. As I said, I like this class. I would have no problem using it in my campaign, though I would do so in the form of additional rules to supplement the pre-existing version of the gnome. So in my campaign world the Delving Deeper rules would describe a magic-using subset of the overall gnome population. I haven't decided yet whether to update my "How to Make a PC" handout to include gnomes or not, but the very fact that I'm considering doing so is a pretty positive sign.
You can get your own copy of Delving Deeper - Gnome and lots of other cool Brave Halfling Publishing products at their YourGamesNow page or at the Old School Renaissance.