Trying to figure out what the heck Wizards is up to has become a sort of cottage industry among the roleplaying blogosphere. Whenever the chatter reaches a certain pitch I sometimes think about these lines from the film Other People's Money: 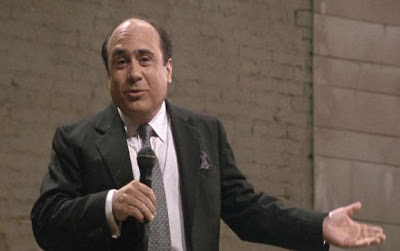 "This company is dead. I didn't kill it. Don't blame me. It was dead when I got here. It's too late for prayers. For even if the prayers were answered, and a miracle occurred, and the yen did this, and the dollar did that, and the infrastructure did the other thing, we would still be dead. You know why? Fiber optics. New technologies. Obsolescence. We're dead alright. We're just not broke. And you know the surest way to go broke? Keep getting an increasing share of a shrinking market. Down the tubes. Slow but sure.

You know, at one time there must've been dozens of companies makin' buggy whips. And I'll bet the last company around was the one that made the best goddamn buggy whip you ever saw. Now how would you have liked to have been a stockholder in that company? You invested in a business and this business is dead. Let's have the intelligence, let's have the decency to sign the death certificate, collect the insurance, and invest in something with a future."

Larry the Liquedator (played brilliantly by Danny Devito) may come off as a jerk, but he's not acting illogically. Within the corporate paradigm, he makes a helluva lot of sense. Does anyone seriously doubt that there's at least one guy just like that at Hasbro, waiting to pounce? If I was a Hasbro stockholder I'd want a cutthroat guy with Larry's attitude on the team. Even if I didn't follow all his advice, just to keep the organization more grounded in economic reality.

I think that's why sometimes WotC's decisions seem so opaque. Some moves have nothing to do with us. A perfectly rational response to the Larry the Liquidators could look like utter nonsense to actual participants in the hobby.