So Google Maps is pretty awesome

If my calculations are right each half of this map (above and below the red line) is equal to one standard Judges Guild hexmap at 5 miles per hex. 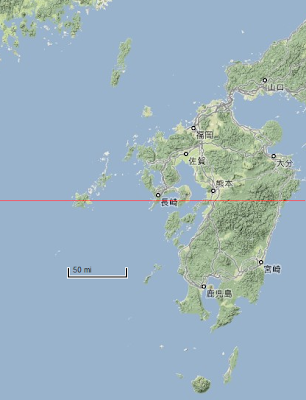 The main island there is Kyushu, known in earlier times as Saikaido. It's the southermost of the four big Japanese islands. In the upper lefthand corner is a little piece of the Korean peninsula.

Towards the end of the 13th century good ol' Kublai Khan mounted two joint Mongol/Imperial Chinese/Korean expeditions to take the islands. Both launched from Korea and both made landfall on Kyushu. The Japanese didn't exactly defeat the forces of the Master of Xanadu. Bad weather did more than katana work to scuttle the invasions.

I don't know about you, but to me the six or so years between the two invasions sounds like a perfect setting for some quasi-historical Oriental Adventures D&D. Especially if you assume that the first invasion wasn't a complete trainwreck, thereby allowing you to pepper the hexmap with some remnants of the invader army: steppeland barbarians, evil old Fu Manchu type wizards, and Chinese-imported hobgoblins.

Also, Kyushu has a bigass volcano in the middle of the island. That's always a plus.