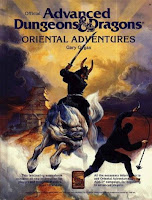 I will readily admit to being the kind of provincial yokel whose ideas about Asia are unduly influenced by martial arts movies, anime, and stuff like that, though perhaps realizing that fact gives me a leg up on some people. Either way, I’ve long operated on the assumption that the 1st edition Oriental Adventures gets at least as much stuff wrong as it gets right, culturally speaking. For example, OA tracks an Honor stat and places importance on family ties when baseline AD&D clearly does not. To somehow attribute honor and familial duty as specifically Asian virtues clearly misses the bus on vast swaths of Western culture. Pendragon and Hackmaster both demonstrate the neat things you can do with some sort of occidental honor system and darn near any campaign can be enhanced with a dash of family soap operatics.

Two big things continue to draw me to the idea of running an Oriental Adventures campaign. The first is the basic awesomeness of desperate ronin, sneaky ninjas, and kung-fu masters. That’s a pretty shallow reason to play OA but keep in mind that “OMG! Dragons!” is pretty much the line of thinking that got me into this crazy hobby. The second reason OA intrigues me to this day is its presentation as a D&D game where nearly all the Gygaxian building blocks have been replaced by analogs but otherwise the system remains intact. You can find a bazillion games that mess with both the building blocks and the system, but precious few that leave unmarred ancient landmarks like classes, Vancian magic and hit points.

(Just for a moment imagine that concept as a template for campaign creation by individual referees: keep all the crazy rules but completely homebrew all the classes, races, spells, monsters and magic items. That would rock in nine flavors of radical. You could probably cobble together one example of such a set-up just with a long afternoon and a stack full of old Dragons.)

Once I realized that OA is little more than plain vanilla AD&D with blue legos in the box instead of red ones, the question of how to do a campaign immediately answered itself. All I would need is a numbered hexmap, some dungeon levels, and a starting base all stocked with stuff from the OA book. Questions about “authenticity” that used to bug me don’t even enter the equation. When we take the meat and gristle of Western literature and turn it into the sausage of gaming very little is gained by stopping the show to discuss whether or not we’re being fair to the inspirational source material. Why should it be any different with Asian-influenced games? Does it really matter whether this 21st century American mangles the Odyssey or Outlaws of the Water Margin to power a game? Probably not. The level of cultural disconnect is pretty large either way.

PS: This post was inspired by Alex Schroeder's "The Kitsunemori Campaign", an mythic Japanese micro-sandbox in Fight On! #4 and Mike D.'s Ruins & Ronin project. Good stuff.

PPS: While working on this post I finally put my finger on something that's been bugging me about the Oriental Adventures hardbound since 1985. Why is their no frickin' character art in the classes and races section? You get a ninja and a samurai on the cover, but then you don't see another character until the yakuza in the equipment chapter. After that you get two or three spellcasters in the magic section. Flipping through the classes is just less fun without the "Holy crap! I need to play this dude!" full body character shots, even if I don't need to be shown what a Shaolin warrior monk looks like. And introducing a new set of races without illos is just plain dumb. To this day I don't really know what the heck a korobokuru is supposed to look like. They're basically described as dwarves but even hairier. I tend to envisage them as Cousin It wielding a naginata.