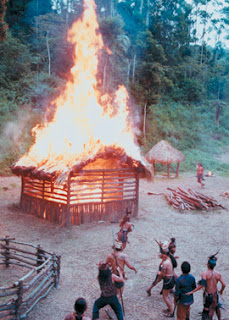 Harold the Adequate, Farley the Dwarf, Courtney the Loser and the Brothers Hoyle and Cadfael explored below the West Tower.  They all returned alive, but Courtney was missing most of the flesh on his face (green slime cured by fire).  A cure light wounds turned much of the poor bastard's face into scar tissue rather than blackened skull, but either way he's now Courtney the Hideous.  And Brother Cadfael picked a fight with the crows near the end of the session.  He comes back covered from head to toe with tiny wounds from pecking beaks.

The group explored under the west tower, in places west and northwest of the Goblin Village.  They eventually stumbled upon a Temple dedicated to Satan in his form of the Tempting Serpent and looted a bunch of gold religious implements.  This stuff was worth quite a bit to certain anonymous locals, resulting in massive carousing that got a bit out of hand.  The party spilled out of the Abbey and into the countryside and somehow the nearby village of Camelton caught fire.  The good news is that the witch and her hut were in the part of the village that didn't burn.  The bad news is that, in wake of the disaster, local prices for certain goods have gone up.  Check the latest version of the chargen doc for the new prices. (Hint: stuff made out of wood is more expensive now.)

One of the players convinced me to try enhancing play with Twiddla.com, a group drawing program.  Below is the map we made.  Although the map was very helpful, I disliked flipping back and forth between it and the G+ Hangout screen.  Google+ Hangouts works for me as an online gaming venue because I can see the participants react in real time, so I'm not sure if I will try Twiddla again. 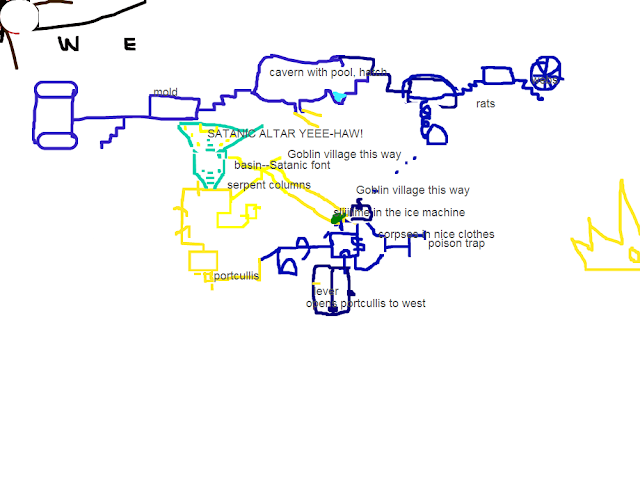