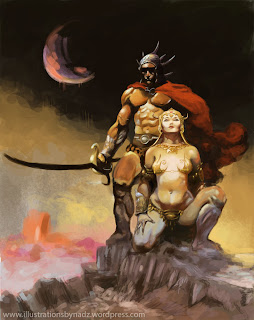 When  I was a kid all the coolest swords & sorcery books had art like this on the cover.  Naked or nearly naked people are just as important an element of the genre to me as blood-drenched swords and dark pacts with infernal intelligences.  So for my next campaign, set in ancient Japan, I kind of want to get some of that sword & sorcery mojo going, so instead of this sort of thing: 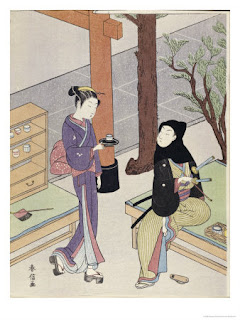 I sort of want the visual aesthetic to be more like this: 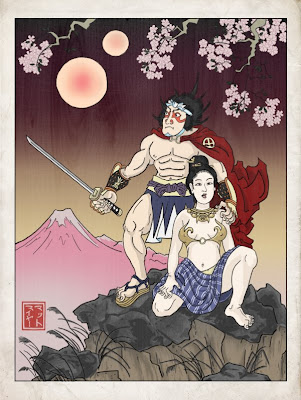 I've been scouring the internet looking for Frazetta style S&S art depicting Japanese people, but so far my results have been limited.  If I settled for 'big eyes' style anime art, I could easily come up art, but that's not what I want. So the search continues.

In the meantime, I think I'm going to use a new house rule for the next campaign.  I'm already leaning towards Lamentations of the Flame Princess as the system, and its use of an ascending AC system actually makes this idea dirt simple:

The Frazetta Nakedness Rule: PCs (and key NPCs) use their Dex score as their unarmored AC, or the normal unarmored base, whichever is higher.

Even with 3d6 in order, that ought to get a few people running around without armor, especially if the price for decent armor is kept high and magical armor of the plus variety non-existant. One of the ways LotFP cleverly avoids a lot of bloat is by keeping all ACs low and eschewing plus weapons/armor.