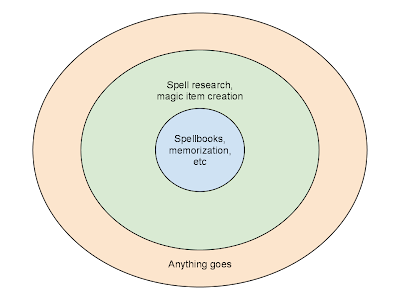 Dig this diagram.  I've switch from MS Paint to Google Docs for my inept chart needs. I like the results.

Anyway, in my experience maybe 90% of PC magic-users stay in the center blue area.  There's a couple possible reasons for this.  One is that most versions of the game require serious gold and/or XP requirements to get into the green region.  If you need to be an MU11 to make items, then most MU will never do it. Another is that some players are more casual than others.  Some dudes just want to throw fireballs, no big whoop.

Another reason many MUs never engage the spell research and magic item creation rules is that they don't realize that they have these powers.  The chargen handout for my World of Cinder campaign specifically noted spell research as a class ability for magic-users and elves, but I'm not sure anyone ever actually wrote it down on their character sheet.  "I can cast sleep right now" tends to overshadow "with a few weeks and a couple thousand gp (that I don't have), I can make up a new spell".

Then there's that outer area.  I think many players don't realize that this region even exists.  Maybe it doesn't in some campaigns.  Whether the DM acknowledges it or not, the "Anything goes" region is in play if there's ever some evil jerkwad trying to conquer the world with one of those big apocalyptic not-on-the-spell-list rituals. In the Caves of Myrddin, at least two players have gotten some work done in this area.  A certain elf knows how to create a magical safe room, where no evil creature can set foot. And one of the magic-users is on the verge of being able to contact a demon. I can't wait to see how that turns out.