Philip the Black, Luxembourg's premier necromancer, starts the session off right by blowing a carousing roll.  It seems he got drunk and tried out a new blasphemous ritual 'involving' Ewella the Alewife's favorite goat. Philip is now #2 on her personal grudge list. How long does Ewella hold a grudge?  The #1 spot is held by her husband, who has been dead for over twenty years.

So the next morning five set out from the Abbey: a hung over Philip of Luxembourg, the dwarven duo Farley Sheehan and Tarlo Tunnelcutter, Blixa the Thief and his dog Abe Lincoln Vampire Hunter.  Somehow eight returned, in two waves.  About two and a half hours after the party left three completely naked buxom lasses show up at the Abbey, one of which carries the key to Blixa's room.  This giggling, bouncing trio introduce themselves as Shuddatha the Eviscerator, Ha-Vhlacho the Time-Beast and Oggonith of the Severed Star. They report that Blixa freed them and three of their sisters from a magical painting, but the others were petrified by a medusa in the courtyard of the ruined castle. 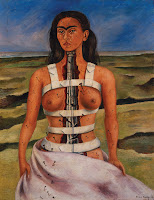 When the party returns a few more hours later, Philip of Luxembourg is literally completely covered in blood from head to toe, dripping all over the place and reveling in it.  Like at the end of Carrie or when blading at a wrestling match gets totally out of hand. Farley Sheehan is bloody up to his knees and the rest of the party is fairly bloody as well.  They report two separate run-ins with vampires somewhere under the old gatehouse (a.k.a. the east tower).  First, they found vampiric Frida Kahlo asleep in her coffin.  She was clutching a magically trapped painting that drew the two dwarves to the center of the multiverse.  Farley is still a little goggly-eyed from doing the electric slide with Azathoth.  (Tarlo made it out of the painting, but later fell in a pit and died. That's D&D for you.)  Anyway, they staked the bejeesus out of Frida and disintegrate her corpse with sunlight and holy water.  Blixa took her magical paints and brushes and painted an escape hatch onto the canvas.

Later the group found a spot presumably close to the dragon's lair, as the floor was covered in a sufficient quantity of sloughed-off giant reptile scales that Farley now sports a shield like the one in the film Dragonslayer.  Not wanting to run into the dragon, the party elected to explore another part of the dungeon.  They soon ran into Billy's replacement character, a cleric.  I don't recall the dude's name.

They encountered the cleric just before examining a strange chamber.  The floor is stained with blood.  Blood-stained holes one to one-and-a-half inches in diameter pierce the ceiling.  In the center of the room is a squat basket/vat type thing, like you would crush grapes in to make wine, but nearly full of blood.  Just as they begin speculating about the purpose of the room they hear people talking as they descend a nearby spiral staircase.  "Why were three naked women in the courtyard anyway?" "I don't know man.  What a waste they're statues now."  "Yeah, stupid medusas."  It's wandering monster time and guess who the dice say show up?

The two vampires responsible for killing Blixa's war poodle Gleichman stroll into the room and start slurping up blood.  Too bad the party heard them coming, as they spiked the stuff with holy water.  Smoke starts pouring out of their mouths and noses when suddenly Philip bursts out from under the surface of the blood, laughing like a goddamn psycho, silver dagger and holy water flask in hand!  The dwarf and the cleric appear from behind half-column supports along the wall, with Blixa and Abe attacking from the rear.  The party came loaded with garlic and holy water and stakes, so they eventually overwhelm the two dorkiest vampires under Dundagel and manage to avoid losing any levels in the process.  Billy'c cleric earns bonus style points by pushing his holy symbol right into Squiggy's stupid face, burning him so deeply a cross-shaped section of smoldering, blackened skull is revealed.  In the end one vampire is complete disintegrated and other is staked, then beheaded, then melted with holy water. Revenge is a dish best served bloody.

Back at the Abbey, Blixa publicly counts out 1,000gp to each of his fellows.  He then disappears into his lady-laden room. Farley and the cleric go get themselves cleaned up, then Farley starts buying drinks for everyone.  Philip the Bloody cackles something about the truenames of demons and resumes his horrid experiments.

All in all, a pretty kickass day in the history of the Wessex campaign.