Remember when Geoffrey McKinney's Carcosa precipitated the end of Western civilization?  A new, deluxified edition is out from the publisher everyone loves to hate, James Effin' Raggi, a.k.a. the Lamentations of the Flame Princess dude. Also released by LotFP is an entirely new weird ass sandbox from Mr. McKinney, entitled Isle of the Unknown. I haven't seen the inside of either yet, since they're coming on the slow boat from Finland, but the original Carcosa was one of the best things published by the old school ruckus and the previews for the new books look like they're full of kick ass.  You can order you own copy (print and/or PDF) over at the LotFP store.  Also get Vornheim while you're there, if you don't have it already. 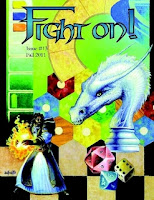 There's a new issue of Fight On!, the flagship print magazine of the old school ruckus.  What is this, number thirteen?!  Damn!  I can't even friggin' keep up with the awesomeness!  Every issue is cram-packed with content.  I think I have a couple of tiny stupid die charts in this one, but the real reason to pick it up are the ten different adventures!  Direct links to ordering print and PDF copies are here and here. If you're new to FO! (or like buying the same stuff twice) then you should also check out this sweet compilation of the first four issues.

I've been asked if there's any chance that I will have a draft of Fleet Captain, my reto-stupid spaceship project, available for some playtesty action over the holidays.  Sadly, I don't think that's going to happen.  The project has not been forgotten or dropped, though.
Finally, I want to share a really dumb online cartoon series that David Insel, one of the Encounter Critical inner, inner circle, pointed me to recently.  Check out the awesome majesty of Gundarr!