What is this strange "jumping" of which you speak?

My birthday was on Sunday, which I spent sicker than a dead dog at a plague convention. That was partially my fault though, as I spent the previous evening attending an awesome wrestling extravaganza. That only aggravated the illness I was already suffering from. But this post isn't about the TNA house show. Maybe I'll write that one tomorrow.

Instead I want to tell you about the killer present I got from the team of my sister and my mom. They went into cahoots. Sis got me an Atari 2600 console in great condition and mom got me a box of old cartridges, almost all of which have their boxes and documentation intact. It's a sweet set-up for some crappy old videogaming. I've mostly been playing Space Invaders (Which I adore. One of my oldest webpages is a tribute to that game.), direct descendants of Space Invaders, and Pitfall! It's been probably 20 years since I read the instruction booklet for Pitfall! Dig these excerpts: 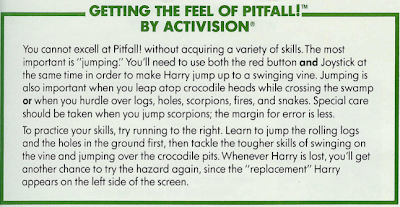 Whoa! Hold up there a moment, Tex! How the hell am I supposed to use the button and the joystick at the same time?! I'm not some sort of supernerd who devotes his entire waking existence to mastering such complicated videogaming techniques! 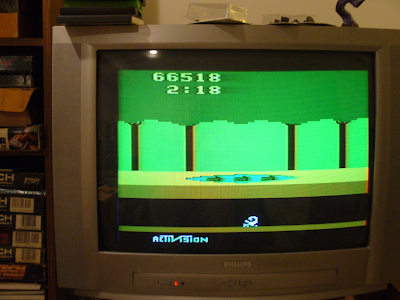 ACTIVISION, YOU OWE ME

Also, Demon Attack has the best cover art and promo blurb ever invented. 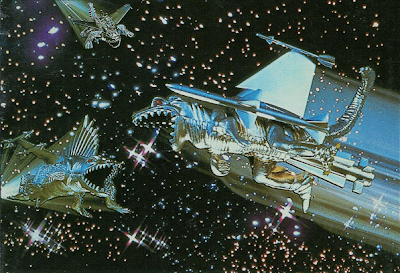 Marooned on the ice planet Krybor,
you watch legions of
eerie creatures scream overhead.
They hover ominously.
They give you no quarter.
Attack and destroy them--or be destroyed!
Armed with your Laser Cannon,
you confront the
ultimate challenge: Survive!
Is it just me, or would "They hover ominously" work as a band name?