Okay, so I was reading the fourth trade of Grant Morrison's Doom Patrol run when I noticed something on the cover. Check it out: 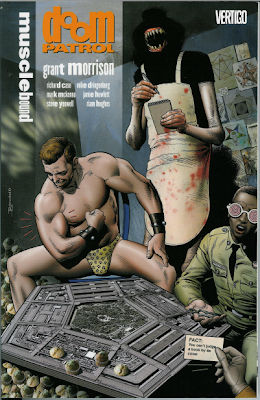 What's the first thing you notice there? Is it Flex Mentallo's superpowered bicep? His leopard-print crotch? (It's okay. I won't tell. Little Flexie was the first thing I spotted as well.) Howzabout the Pentagon he's squatting over? Maybe the waiter from the Tea Room of Desolation caught your eye. All those things leap off the page. But look towards the upper right of the image.

When I saw both these diagrams AND the Pentagon on the same cover I had a pretty good idea where the storyline would be going. I don't recall if I first encountered the "Pentagon-as-magical-containment-device-for-horrible-entity" thing in Principia Discordia or the Illuminatus! trilogy, but it definitely appears as a plot point in the latter. But Morrison manages to make that trick work a second time. He's good at that.

But let's zoom in on one of these pentagrams: 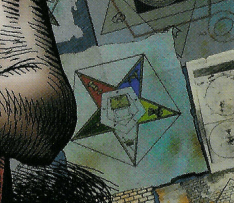 This is funny to me, because that's the emblem of the Order of the Eastern Star, a masonic appendant body. "Appendant body" is Mason lingo for an ritualistic organization that was founded by and/or is subordinate in some way to mainstream "Blue Lodge" masonry. Those scary 33rd degree masons all the conspiracy kooks like to talk about? They get degrees 4 to 33 from the Scottish Rite, one of the more popular appendant bodies. There are literally more appendant bodies than you can keep track of. I'm not sure I could name all the appendant bodies that meet in my own lodge building. Heck, some guys belong to so many they can't recall the names of them all and sometimes they get all the secret passwords and handshakes horribly mixed up. Its kinda funny sometimes, at least when everyone in the room is dedicated to learning lotsa crazy rituals by rote.

During the five years that I was hot and heavy into Freemasonry I was initiated into a lot of appendant bodies myself. I only reached the 32nd degree in the Scottish Rite, so I don't get to help run the New World Order or anything cool like that. Among the other appendant bodies I joined was the Order of the Eastern Star. In fact, I was rather active in my local chapter for a time. My wife was a member as well and that's where we got to know each other. And what is cracking me the hell up about this Doom Patrol cover is that the Eastern Star is one of the most innocuous Masonic orders you're likely to find. The mens-only appendant bodies dress up in crazy costumes, waive swords around, and swear bloody and nonsensical oaths. If you're the kind of conspiracy nut interested in getting frothed up about the Masons, the Scottish Rite and York Rite and Shriners give you plenty of material to work with. The Eastern Star is more like an afternoon tea.