The original three T&T classes, the Warrior, Wizard, and Rogue. I've always liked the T&T Rogue, as a simple and elegant jack-of-all-trades implementation. And I love that a Rogue must acquire spells by hook or crook. The Wizards Guild will not cooperate with such upstarts. The new classes are pretty cool, too. The Specialist takes advantage of existing rules to build a straightforward Expert type that can also be spun off into adventuring types. The Citizen is the class for Average Joe types. I'm a huge fan of that kind of character. The only dubious class is the Paragon, which is an uber-class that seems to squeeze the Rogue's niche.

"Most spells can be infused into potions. Any liquid base may be used: water, juice, milk, liquor, or even blood. Evil types really like to use blood as the basis for the potion. More civilized types prefer brandy while specialists prefer various herbal teas. The Wizards Guild sells two versions of their potions--one in sweetened water and one in brandy. The warriors guild uses brandy and blood for their potions. The Thieves Guild just uses blood. The Merchants Guild uses half a dozen varieties of booze. The Healers Guild uses chicken soup as a basis for everything."

I was expecting T&T 30th to be full of Liz Danforth illustrations. Her art has dominated every other edition of T&T I've seen over the years. And for good reason; she does great work. But in this case the only Danforth art is the cover painting, which I don't really consider one of her better pieces. But the interiors and the counter art are all by Claudio Pozas. In my opinion Pozas is the single best artist that came to my attention during the 3.x era. Here's the piece he did for T&T that I like best: 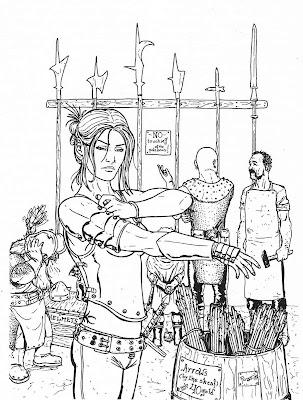 I like the clean lines and the naive slice-of-life approach. In some ways it reminds me of Denis Loubet's unparalleled Ultima work. Maybe Loubet wouldn't have put a tattoo on that chick's backside, but I still see some similarities. You can see more of Claudio's T&T work here.

By way of comparison, here is one of my favorite Liz Danforth drawings: 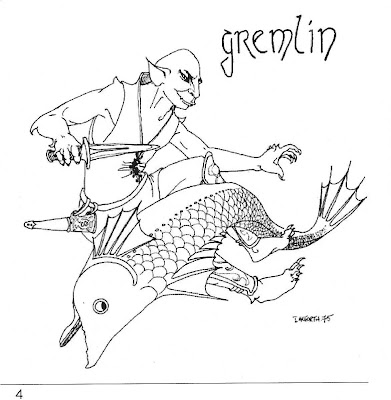 Something about a Gremlin about to whip up some sushi just amuses me to no end. Look how pleased he is! On another note, I'd love a font based upon that label.

In previous editions of T&T your Strength score was your magic points. By report this led to weirdo situations where all the PC Wizards tended to be buff gronks. I mean, if you could play a Dwarf (Str x2) and suddenly double your potential spellcasting, why wouldn't you? St. Andre solves this problem by introducing Wizardry, a stat that basically operates like Basic Role-Playing's Power/Magic Points. I'm not huge on bunches of stats on charsheets (HERO System cured me of that), but this seems like a good fix. A fun Wizardry tidbit is that you can't spell-ify someone with a higher Wizardry, but you can work to lower their Wizardry 'til they're vulnerable.

Doc Rotwang! has talked about this one already, but I want to emphasize it again. Making up new T&T monsters is super-easy. You can assign them a single number, Monster Rating, and get on with the fun. Or you can trick them out with some other cute tricks. Special abilities for monster generally emulate spells, so you can just flip through the spell list looking for new powers for your critter. Making monsters is supposed to be one of the fun things GMs get to do, and T&T rivals Mazes & Minotaurs in terms of giving you fun toys to play with.